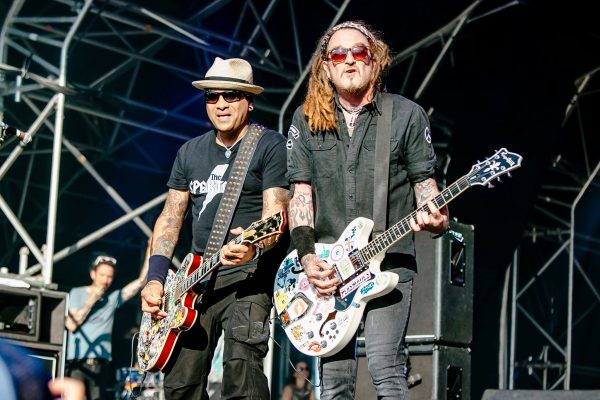 Set in the heart of the Gloucestershire countryside 2000 Trees is the epitome of a great festival. With a really friendly vibe the only problems you’re likely to face are the tough choices as 120 bands over three days create some inevitable clashes.

Soeur are another in a long line of excellent bands from Bristol’s fertile music scene. There’s something of Nirvana in the flow of their sound and I detect some Teen Angels but otherwise they seem devoid of influences which makes this trio intriguing listen. There’s some nice vocal interplay between guitarists Tina and Anya and big props to busy drummer Jim for giving the band a big sound without a bassist. The new track debuted, ‘Do What I Want’ points to a bright future. Powered by punk fury False Advertising are insanely catchy with hooks that immediately ensnare the listener. ‘Not My Fault’ in particular packs a punch and their energetic performance is very mosh pit inducing. Haggard Cat are barely a minute into their set and the crowd erupts: it’s that kind of music. A duo who make a big sound with tunes like ‘Building a Wall’ which don’t forsake melody for aggression but next cut ‘Unshaken’ sees some serious action as the band proceed to pummel the audience for 30 minutes. Effervescent and bubbly Nervus are here to ensure you have a good time despite the serious message in their songs. Case in point being ‘The Inconvenient Truth’ a song which marries heavy lyrics to a sound that grooves with a real swing. Attacking the stage with real gusto the Petrol Girls open with ‘The Sound’ from their latest record and the frantic ‘Slug’ follows. Playing it like they mean it ‘Survivor’ contains lots of neat time changes while ‘Touch Me Again’ caps an impressive set. Rugby’s blackened musicians Conjurer bring some punishing metal to 2000 Trees. Kind of like Crowbar jamming with Clutch only faster and heavier. Building huge monolithic structures from sound the lay the venue to waste and it’s surely a matter of time until they hit the mainstream.Turnstile are a band reinventing the wheel with unorthodox rhythms and time signatures and their blending of different genres. The integrity with which they operate holds the disparate elements together as groove leaden sections effortlessly nestle next to nu metal breakdowns. All over the stage like five whirling dervishes the bands high octane performance is rewarded with plenty of crowd surfing and a spirited run through of ‘Blue By You’ is a definite set highlight. I defy anybody to stand still to Flogging Molly‘s unique fusion of punk and traditional Irish music and by the time we hit ‘Life in a Tenement Square all but the infirm are on their feet and jigging. ‘The Devil’s Dancefloor’ increases the insanity before ‘Crush’ segues into ‘We Will Rock You’ as a fitting tribute to Freddie Mercury. Perhaps the hardest working man in hardcore Frank Turner headlines the opening night with his band The Sleeping Souls. Constantly on the road with over 2500 shows under his belt has left Frank a master of stagecraft and the first few bars of set opener ‘Get Better’ are enough to win over the crowd. The huge throng at the front of the main stage are treated to ‘1933’ and ‘Long Live the Queen’ and go suitably wild as fists pump the air. Lyrically astute like Billy Bragg his songs explore the minutiae of modern life and are easily relatable. An energetic 70 minute set is closed with three well deserved encores including ‘Recovery’, ‘I Still Believe’ and fan favourite ‘Four Simple Words’. 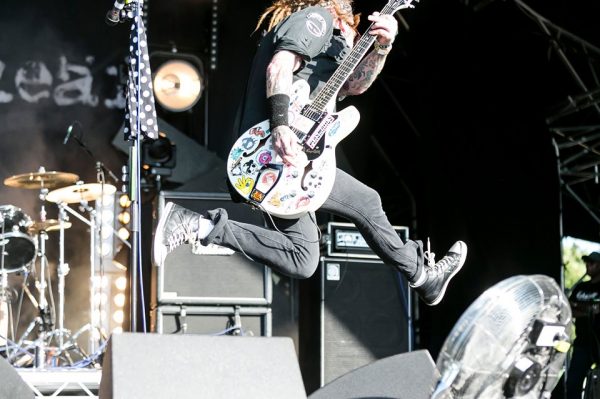 With a sound guaranteed to blast away any hangovers Brand New Friend display a strong song sensibility and their energetic confidence renders them extremely likeable. The male and female vocals provide a nice foil for each other while the keys give thing an ethereal feel. Groundculture hail from Newcastle-Upon-Tyne make music to break stuff to. Putting the ‘hard’ back into hardcore there’s a real punch to their sound as ‘Realised’ promises much from their forthcoming album as a circle pit breaks out while ‘Catalyst’ ensures they bow out on a high. New York’s Drug Church have taken a love of ’90s grunge (Seaweed, TAD) and filtered it through a hardcore prism and the resulting sound is refreshingly original. Like hyperactive children weaned on a diet of amphetamines they play their hearts of to a tightly packed crowd and those present know they’ve witnesses something very special. The Wildhearts are still led by the irrepressible Ginger and the they still play at the punkier edge of Motörhead. 2000 Trees finds them on the crest of a wave armed with their critically acclaimed new album Renaissance Men. They only pull in a relatively small crowd but they’re enthused by the punky rock n’ roll of tunes like ‘Vanilla Radio’. It’s been ten years since I first saw Rolo Tomassi live and they’ve lost none of their impact. If anything their energy seems more finely honed and their music still seems cutting edge a decade later. Singer Eva Spence undulates and writhes like a swan while the band lock in tightly. The bands sound seems to constantly teeter on a precipice and it’s their skill keeping it balanced on the edge and a career spanning set is well received. A capacity crowd welcomes the Cancer Bats like returning heroes as ‘Bricks and Mortar’ demolishes all present. Not a second is wasted as ‘Health Destroyer’ initiates plenty of crowd surfing before ‘Rotate’ causes complete chaos on the floor. Playing with an intensity that could rival early Cro-Mags they seem truly humbled by the reception of their first 2000 Trees appearance. 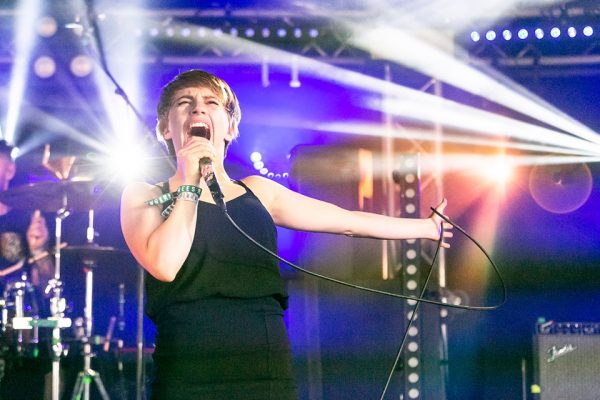 All Ears Avow hail from Swindon and mix emo and indie rock with a danceable groove…sounds like a strange mixture but the band make it work. ‘Raise Your Hands’ is simultaneously evocative, urbane and catchy while new track ‘Nobody Like You’ signposts a bright future. ‘Got Lucky’ sets the venue aflame and caps a rewarding performance. Another band with groovy rhythms are Scotland’s Vukovi. Whether you love or loathe their music it’s impossible not to like hyperactive vocalist Janine Shilstone who joins the circle pit and crowd surfs on a rubber dingy (really!) on set finale ‘I’m Weird’. Imagine Crass’ message delivered by The Sundays and you’ll have something approaching the Muncie Girls. It’s a set culled from their latest album and features an ode to everyone’s favourite bigot in the shape of the scathing ‘Jeremy Clarkson’. Now performing as a four piece gives the band a bigger sound without sacrificing melody as the ever present ‘Respect’ closes their set and pleases the crowd. Like some Merauder/Slayer hybrid Higher Power haven’t come to take prisoners and, fresh from the studio, new track ‘Shedding Skin’ attests they’ve been spending their time well. Pop punk legends A take to the main stage with an energy that belies their years. ‘Took it Away’ kicks their set off in truly tenacious style and things get more frantic as ‘Monkey Kong’ and ‘Something Going On’ follow. Vocalist Jason Perry’s stage raps are typically self effacing as he requests an age appropriate circle pit (at walking pace!) This set is revealed to be bassist Dougie Poynter’s last with the band and he plays like it by turning in an energetic performance and takes constant sojourns around the stage. They can only close with one song: the seminal, and their biggest hit, ‘Nothing’ which caps an impressive set.