Y&T are back in Blighty and where better place to start the UK tour than the Black Country, The Robin in Bilston to be precise. Having flirted with a couple of dates at The Slade Rooms on recent tours, The Robin appears much better suited to the band and to the 350 strong audience, the vast majority of whom were over 40. 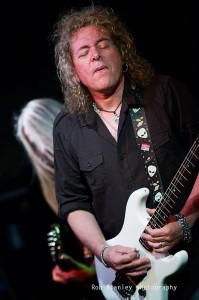 Y&T have been around a long time, since 1973/74, fore-runners of the US hard rock scene. Guitarist/Vocalist/Mr Y&T – Dave Meniketti is one of the most underrated, at least in terms of mass popularity, rock guitarist of his generation. He is a guitarist’s guitarist with many of his peers citing him as a major influence.

One of the advantages of being a ‘heritage act’ is that your back catalogue regularly achieves anniversary milestones and gives the band a very valid reason to tour without a new album but with a celebratory set list that nods towards a party.

This year it’s the turn of Mean Streak, technically their 5th album but also one smack in the middle of their ‘popular period’ in the eighties and first released in 1983 – yep 30 frigging years ago!

It’s the title track that Y&T opened their tour with, but not before Dave M had forgotten his wireless set, so wasn’t even plugged in – a charming school boy error from a man hitting 60 this year.

What followed was to be expected really; a 19-song master class in melodic song writing topped with exceptional guitar playing. Dave is normally an equally exceptional vocalist but early in the set he apologised for his ‘annual UK cold’. It was barely noticeable as he is a seasoned pro and even when he held back on some of the highs he still delivered with passion and heart-felt emotion. 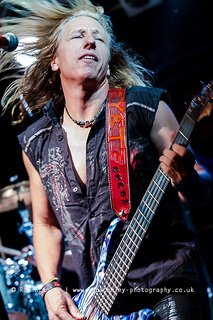 As good as a nostalgic look back is, it does sometimes offer a slight dip as some of those rare ‘gems’ get a dust down. You know, that song you sort of recognise but are not sure of the lyrics so you ‘mouth’ the words in case anyone spots you ‘not knowing the song’, when really ithe only one in the room that knows it is that over-zealous drunk guy in the middle who’s bolshie enough to correctly shout every frigging word. Git.

However, it’s not those gems the audience are really there to see, it’s those standout, killer tracks that are associated with key moments in your life, invariably in your youth – those halcyon days, out on the pull with a full head of hair. And not only those killer tracks but the ones where Meniketti lets rip on his fret board, fingers dancing at the top end where he appears to be able to go ‘one note higher’ than any other guitarist.

The technique was stunning. The sweat real, flying off as his head that was frenetically whipped side-to-side. The emotion burned into his straining, blood-filled face. Let’s just say he was giving it some!

It was during ‘Dirty girl’ that Dave first opened up his soul and welcomed us in. It’s a moment that you wish your cameraman was on stage taking a shot of 350 mouths agape in awe. He was then magnanimous enough to allow us mere mortals to recover by playing some ‘normal’ songs before ratcheting it up again with the instrumental ‘I’ll cry for you’. There were no lyrics, it was the guitar doing all the singing and if ever there was evidence of a man striking a deal at the crossroads, this song was it.

As a respite there was a fantastic rendition of the hell-raising ‘Squeeze’ in honour of sadly departed bassist, big Phil Kennemore (has it really been 2 years since his passing?) 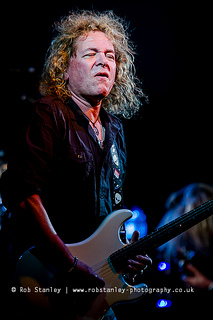 But Meniketti was not done with us yet, there was still time to sap every ounce of emotion and channel it through those blurring fingers with ‘I believe in you’ and set closer ‘Forever’.

If this was Y&T with a cold, how good will it be when the night nurse kicks in?