Watched the video? Disturbed yet? Good. When Young Knives started out they were slightly quirky Indie rock. But things then turned weird fairly quickly. If you look them up on Spotify you are told that if you like Young Knives you’ll also like The Cribs. But watch the video above…Young Knives clearly don’t occupy the same planet as The Cribs. As the band themselves are keen to point out, Throbbing Gristle and Suicide would be a much better comparison.

Many of you probably won’t have heard of the band. Formed by brothers Henry and Thomas (who prefers to be called ‘The House Of Lords’) Dartnell, plus Oliver Askew, and named after a misunderstanding of ‘young knaves’, they have just returned to the fray from a 4 year hiatus with ‘Barbarians’, their first album in 7 years. The album, described by the band as “the most cathartic and noisy album of our career” was inspired by John Gray’s 2003 book ‘Straw Dogs’, a radical philosophical diatribe that believes we are just another animal, with an animals instincts, submitting to baser desires, never learning, doomed to eternal warfare, ecological disaster and, ultimately, extinction. There is no God. Science is no more than another phony religion. Comfort reading it ain’t.

The noise the band make to bring this book to life is as fucked up as you’d expect. It’s darker than pitch, jarring and always unsettling. Opening track ‘Swarm’ sets the scene. Discordant clatter kicks in immediately, creating a chaotic background. Motorik drums create a beat over which droning vocals and dark synths join in with frankly disturbing hollering. It’s gothy post-punk. It’s an aural bombardment.

And on it continues. There are, however, tunes buried in these songs…somewhere. ‘Society For Cutting Up Men’ (great title) adds a smidgeon of guitar, if that actually is a guitar playing that twisted solo. It’s a grungy Portishead, and did someone just randomly shout “big juicy arse” in there?

All is not well in the world of ‘Jenny Haniver’ (and just Google Jenny Haniver to see what it is, *shudders). Fittingly enough, it sounds like an 80’s video nasty horror theme. These songs are all, however, strangely compelling, pulling you, seductively, towards a perilous cliff-edge. They do not want to be your friend.

The title track opens with a recording of what sounds like the preamble to an unlicensed bare-knuckle fight (“no biting”). It then careens into a punishing beat, a grizzled electro-thrum leading the charge. It unflinchingly explores our darkest urges, vocals swerve in and out of focus – chanting, roaring, yelling with frightening aggression, building to an ear-bleeding, damaging take-off roar.

‘Sheep Tick’ (see above) sounds like an apathetic, industrial Gary Numan, or a Dalek singing an electro goth dirge. It lives in a very dark place. The vocals promise unhinged delights/threats, even, at one point, yodeling. It makes XTRMNTR era Primal Scream seem positively sunny. ‘Only A God’ has hints of Roger Waters at his most misanthropic, “what a waste”, “nothing but bad tidings, sorry”. It’s a foul, slow moving creature, heading inexplicably towards you, intent on doing you harm, a suffocating, claustrophobic roar.

This is about as far from easy listening as it gets. It’s a distress call from a very bad, bleak place indeed. As noted, there are tunes and melodies, good ones, but they are wrapped in chains and dumped in a foul, polluted canal in a part of town where no right-thinking people would dream of going. That’s not to say it’s bad – it’s very, very good. It’s a very English nail bomb, dipped in the politest of poisons. It’s gloriously negative, leaving you drained and disturbed but it may well be their best album yet. I, for one, am glad that they’ve come back to play in these fucked up times.

“Oh, what a waste of Bordeaux”

Released on 4 September 2020 by Gadzook records 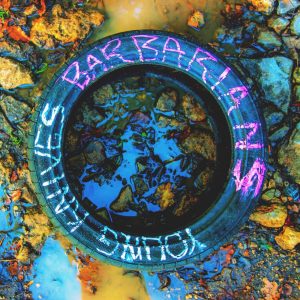