UK tour dates for this legendary and influential icon don’t come around often, so tickets are sure to sell out quick. Tickets for both dates are on sale now, available HERE

The name of Yngwie Malmsteen has always stood for uncompromising excellence. In a career that now spans more than 40 years he has proven himself to be a unique artist. You can try to categorise him in any way you wish. But the manner in which this supreme Swedish craftsman has continually developed his music makes Malmsteen sublimely transcend any definition you attempt to impose.

Merely doing a very good job isn’t an option for Malmsteen. He wants to go – and does go – well beyond such limitations, into the rarefied realms inhabited by an elite number of timeless masters. This has never been more focused and informed than on his startling new album.  Malmsteen shares, “I always try to push myself on every album I do, and attempt things which are more extreme than previously. But what has helped this time is that I wasn’t able to go on the road because of the pandemic. It meant I could take much longer in the studio, both to write and record. Because I am usually always on tour, which is great, I haven’t had the luxury of spending a lot of time working on new music for more than 20 years.  But I suddenly had no pressure at all on that front. And I feel the album has benefited enormously as a result.” 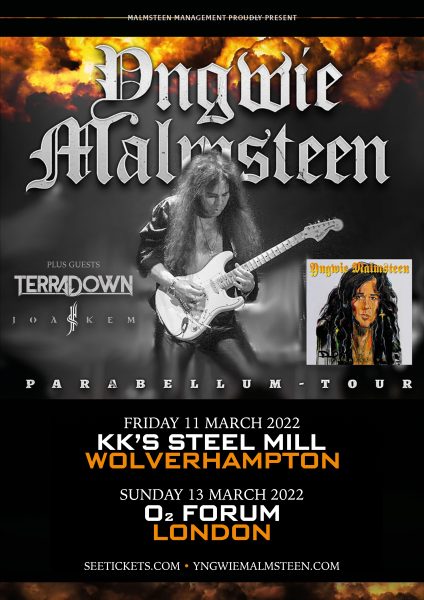 Four of the songs here feature vocals. But once more, this wasn’t mapped out in advance.  Malmsteen offers, “I love to listen back to what I’ve done in the car. Sometimes I find myself singing along to what was supposed to be an instrumental. That’s when I realise this song does need vocals. The opposite happens as well.”

The album title ‘Parabellum’ is Latin, translating as ‘Prepare For War’. “There’s a track on the album called ‘(Si Vis Pacem) Parabellum’. This translates as ‘If you want peace, then prepare for war’.  He offers, “It was a last-minute decision to make this the album title. But I think it fits very well.”

In closing he shares, “The bottom line for me is that the passion I feel for the music I make has to be obvious. I am the sort of person who lives in the moment. I wanted this album to have a joyous, spontaneous atmosphere. This must never sound as if it’s been rehearsed so much that it becomes routine.  I hope people will put on this record at the start and listen right through to the end, from start to finish. I want fans to experience the delight I had in making it.”