What’s that coming over the hill…

Paul Castles hitches a ride with Yeti On Horseback, reviewing their debut album The Great Dying, released via Medusa Crush Recordings on 30 September 2016.

Sasquatch, Big Foot, Yeti. Whatever your preferred name for the mysterious hairy man/beast that lurks deep in those there woods, relatively few can say with hand on heart, that they’ve ever stumbled across the big fella. Well at least when it comes to Yeti On Horseback we’re talking about something tangible that you can reach out and touch, and certainly hear. As well as possessing a tremendous name Yeti on Horseback are also a Canadian doom band of some repute, as those who have already fallen under the spell of their debut EP Dragged Down To Hell will ratify.

The London Ontario quartet now look to build on the foundations of that debut release with a first full length album, The Great Dying. With so many diverse lines of doom around clearer comparisons help define a sound and with Yeti On Horseback the likes of the monolithic trio Sleep, Electric Wizard and Yob all safely enter the extreme equation.

Yeti On Horseback’s mantra is ‘We Tune Low and Play Slow’ with the focus purely on the aural pounding rather than the individuals, hence the understated band member names of RP, MS, NS and SR. The Great Dying features six tracks and you won’t by now be surprised to hear that the average length is around 10 minutes, beginning with the thunderous ‘Tree Of Death’ during which an anvil like destructive thud crashes down with all the subtlety of a bull in a china shop – correction, Yeti in a china shop.

If you survive that first battle you may feel in need of a cuppa to refresh you. But with Yeti On Horseback forget the Chamomile, Yorkshire or Darjeeling. The only brew pouring out of this rancid pot is ‘Viking Mushroom Tea’. Make no mistake this is a well named number as some of the headspinning rhythms will leave you feeling as though you’ve been dining on mushrooms and not of the button variety. And while the riffs slice through a thick dense magical mist, a monotonous drum comes down gratuitously while a garbled and strained vocal, courtesy of RP, strains as though fighting for air. The 13-minute composition is broken up by some hollow guitar work before the Yeti’s familiar roar returns, the track eventually dissolving into an emotive end, reminiscent of Pallbearer. 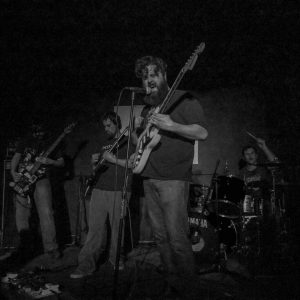 ‘Fables And Lies’ begins sweetly enough but trying to keep a Yeti quiet is about as easy as carving up the Sunday roast using chopsticks. Sure enough the lumbering sound slowly starts to build once more and before you’ve got time to make a run for it Yeti On Horseback have you cornered and proceed to administer another beating that will leave you feeling like you wish you’d never left the house.

What follows is ‘Lynch (A Prelude)’ which recreates the famous scene from The Elephant Man which ends in the pitiful misshapen figure of John Merrick pleading to a baying mob – “I am not an animal, I am a man.” A cutting riff then starts to chisel a groove through this distressing melee as Yeti On Horseback begin another 13-minute journey with ‘Elephant Man’. While retaining the prerequisite ten-tonne hammer heaviness the song is granted additional depth by a delicate female solo voice that appears briefly while a riff almost drips with tears as though tinged with the same anguished sense of isolation as the unfortunate Merrick himself.

The closer ‘Dragged Down To Hell’ will be familiar to those who heard the EP of this name last year and for those who haven’t then sit back and enjoy. So slow it’s almost in reverse, the pressure builds but is never aloud to truly escape as Yeti On Horseback maintain the intensity and momentum through to the end, a steadily climbing beat helped along by an increasingly taught riff. In the barren badlands of funereal doom Yeti On Horseback have much to offer. 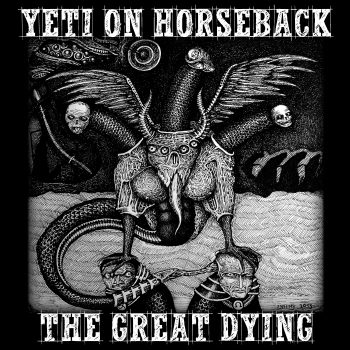