Time slows down out in the desert. 11 years ago Yawning Sons – a band formed by members of Kent post-rockers Sons Of Alpha Centauri and Californian desert rock pioneers Yawning Man – released the rather brilliant ‘Ceremony To The Sunset’, and now they’re back with ‘Sky Island’.

Yawning Man, despite being one of the daddies of the desert rock scene, and instigators of the legendary ‘generator parties’ – where bands rocked up in the desert with their gear, lots of booze and weed and however many people decided to join the fray, plugged in and played until electricity and supplies (and often consciousness) ran out – were never really of the Kyuss, regurgitated Sabbath drones ilk. They were mellower, sunnier, more about guitar textures than bludgeon, but, man, they were good. You’ve gotta be good to create a ‘scene’.

And so they are here, perhaps even more than ever. Married to the post rock stylings of SOAC things go in even more of an interesting direction. It’s a marriage made in heaven…or Joshua Tree, where the album was recorded. The sophisticated guitar interplay works perfectly with the measured dynamics of post rock. This album is a thing of sublime beauty, perhaps evoking the sun baked, lazy vibes of long desert days better than any other album that comes to mind.

Opening track, ‘Adrenaline Rush’ is something of a misnomer. Guitars slowly ring in, a mellow, repetitive groove is established. It’s trippy, airily psychedelic, very desert-y and drifts out into a calming ambient conclusion. An audio relaxant. ‘Low In The Valley’ creates a feel of cavernous space with it’s reverb guitar work, it drifts like tumbleweed, offering floaty nocturnal vibes. Vocals circle your headphones before it mellows into a sleepy jam – it feels longer than it’s near 8 minute run time, but in a good way. This album, you quickly realise, is full of songs that you just don’t want to end.

‘Passport Beyond The Tides’ is another highlight. Keyboards set up a traditional ambient wash before guitars drift in on warm updrafts and ease to the fore. There are gentle, impressionistic brush strokes of fuzz which back away to leave just the guitars, knitting in, weaving around each other. Distortion appears, huge, lumbering single notes, while a plane flies overhead. In a perfect world all instrumentals would be this good, there’s not a wasted second here, it all has purpose and intent. Almost like a post rock Grateful Dead, it’s what the Haight-Ashbury legends could have been if they’d tightened up and ditched the Bluegrass. It’s The Dead at their sharpest, their most telepathic, intuitive, their most ‘on’.

And on it goes. ‘Digital Spirit’ is all strummed acoustic guitars, bongos and harmony vocals. it’s blissed, an idealised hippy hymn, the spirits of Laurel Canyon are being raised. ‘Gravity Underwater’ has just the right amount of sand under it’s guitar strings – sounding possibly like something the Doors may have recorded if they’d survived the 60’s…”my mystic girls remember me” couldn’t sound any more Morrison if it tried.

We finish with the transcendent endless desert sunset of ‘Limitless Artifact’. Time again elongates under the soothing sensory overload of this sonic massage. It could go on all night, it dirties things up for a while before sidestepping into some Byrds-ian jangle before a distorted solo ushers in some jawdropping, soaring guitars that end as they began…ringing.

I’m pretty sure that ‘Sky Island’ will resurface in December on my albums of the year shortlist. It’s a delicate beauty – dynamic, evocative, relaxing and the perfect soundtrack for a lazy Summer evening. Just pop it on, pour a drink and watch the sun go down. 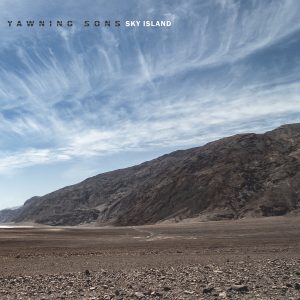