The second album is always regarded as the difficult one. The first is usually written over several years as a band hone their skills in pubs and clubs while for their sophomore effort, they usually have to start from scratch but it’s a hurdle that Preston’s Xentrix jumped with apparent ease. Released just 11 months after their debut (Shattered Existence) their second album, For Whose Advantage? found Xentrix taking all that was great about album number one and honing it into a thrash masterpiece.

The technical nature of Shattered Existence owed much to Metallica (especially …And Justice For All) and while For Whose Advantage? still retains those influences they’re pushed to the background in favour of a band finding their own groove. Like its predecessor this album was produced by John Cuniberti but this time around he’s given the band a wide and expansive sound that makes opening shot ‘Questions’ sound absolutely massive which, in turn, places emphasis on the riff. And ‘riff’ is the operative word; this album is chock full of them, and they’re used as a kind of building block to construct monolithic structures. ‘Questions’ (and indeed all of this album) doesn’t operate at the same MPH as the tracks which comprised Shattered: it often trades speed for power to deliver a different kind of punch but it’s equally potent.

Thrashers needn’t worry, Advantage? is still a nippy number but those moments are more restrained and it’s not until we reach third track ‘The Human Condition’ that Xentrix let the hounds loose. However, this record perfectly walks the line between trying something new and staying true to their roots. The brief acoustic interlude ‘New Beginnings’ is something the band hadn’t tried before, and it makes a fine counterpoint to the heavier sections which bookend the record and also provides a nice foil to the high octane ‘Desperate Remedies’. Shattered opened with an all-out thrash attack (‘No Compromise’) so it’s apt that this album should end on a similar blast, the windswept ‘Black Embrace’, a track which speeds by like a Japanese bullet train.

I originally owned Advantage? on vinyl so it was years before I stumbled upon the bonus track ‘Running White Face City Boy’. Appearing on 1990 CD and cassette pressings its vacuous, slightly novelty nature seems out of place on the album. As with ‘Ghostbusters’ this cover of the Gillan standard was ill advised and proves Xentrix were best when they stuck to their own material. In addition, this reissue adds the 1991 six track Dilute To Taste EP. It contains two studio tracks that are technical yet accessible and much in the vein of those found on Advantage? The live cuts find the guys playing a hometown gig to a rabid crowd; if you saw Xentrix live in their original incarnation then you’ll know the power they wielded, if not this is the next best thing, although be warned that “Marmite” cover of ‘Ghostbusters’ raises its head again…but I’m sure it made perfect sense at a boozy gig.

Dilute To Taste was a strange beast and, as with the Ghostbusters EP, it sits strangely in the band’s discography. It’s neither here nor there and you feel a full-length live album would have been a better option. For Whose Advantage? proved to be Xentrix’s last thrash hurrah before they moved in a more groove metal direction with 1992’s Kin. As thrash metal albums go Advantage? is near perfect and it’s obvious why Xentrix were kings of the UK scene. 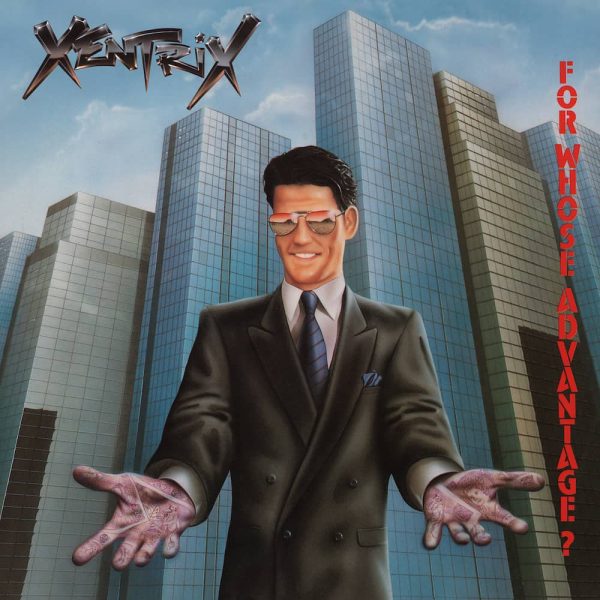