It’s the elephant in the room for many. Since March 2020, those in the creative entertainment fields have been pondering should they address covid in their work or not? It’s particularly telling for those writing science fiction and crime novels for a living. According to its authors, it not only dates potential works but questions the level of fear and depression their readers can take as a form of escapist fiction when it’s a little too real.

For those in the music industry it has been a double-edged sword. It’s only recently they’ve been able to play live again, and if writing a song, the same problem as with those in the books and film world, over whether to mention the pandemic, obscurely or otherwise, or not at all.

We probably need some airheaded MTV rock band telling us to let what’s left of our hand down and party all night long more than most would care to admit. But what if the songs you write have always had a social context, dealt with environmental issues and world politics, and the like? Goddamn, it you’ve got to address it head on, and hopefully deliver them as sympathetically cathartic tonics to the misery many have suffered… Even so, you’ve still got to catch the listener’s ear with a good tune.

This then is the quandary Cornish roots rock band Wille & The Bandits faced as they prepared for their fifth album. Having gained credible recognition, there was a line-up change, leaving singer, chief songwriter and guitarist Wille Edwards last man standing in what had been a formidable power trio live. Catching the new expanded Bandits out at The Robin 2 prior to it all hitting the fan, there was no doubt about the professional skills on show, but it felt they were more backing band than sidemen. There is something of an inevitability about that, by virtue of both pre-established billing and the role Edwards performs within it. The problem could be in how that affected the overall sound and direction.

Truth to tell, on record at least, while a little straighter-edged there’s little difference in sound from the rhythm section, while the addition of keyboards offers warmer supporting tones that might be considered more mainstream appealing. Lyrically, there’s no such taming of the lion, as Edwards expresses his anger and frustration over familiar topics alongside confronting the elephant in the room. That he doesn’t forget to remind us of a few good, worthwhile matters to be cherished in life along the way means we’re not reaching for the noose but reaching for the playback button as certain tracks become new friends.

Between grungy doom-bearing power chords and hip-hop bounces here and there, there’s a poppier singalong aspect that you might feel proves contrary to the actual lyrics being espoused in opening number ‘Caught In The Middle’. It concerns itself with the political identity of this sceptred isle, and how that squares itself with our current global turmoil. Musically it meshes well, and the modern listener will find something of value here as should the classic rocker; there’s even a brief segment of classic guitar stylings before it all crashes towards conclusion.

Drums roll, heralding the way for a blistering guitar riff that just as soon as fades away on ‘I’m Alive’. The first verse then sounds like a trippy rendition of Paul Simon’s ‘50 Ways To Leave Your Lover’ before a more anthemic power chord swing with harmony vocals, shifting back and forth thereafter until an instrumental interlude that takes in the early freeform feel of a jamming Zeppelin, with added Eastern textures and increased vocal harmonies. The band has previously affected such classic rock influences, alongside those of Pink Floyd, and they’re both readily apparent in ‘Without You’ with its rise and fall crescendos. It builds further with mournful anguished roars, straining pangs of slide guitar, and an eerier organ underpinning the work.That it also feels both Southern Gothic and like a scene from a plague-filled medieval court in a film directed by John Boorman barely expresses the varying washes and waves of musicality flooding through this maelstrom. A dark brooding ballad, and about now we need something to pick us up from the doom and gloom. The well-named ‘Good Stuff’ offers that relief – It’s roots rock boogie, as if AC/DC went down to the Louisiana swamp, the “Un-oh-a-oh” more 70s Stones like, while being mellow but compelling in its anthemic groove. This one’s pegged for a single, and may be available as such by the time you read this.

‘In This Together’ kicks things into even higher gear, the “Let’s go!” opening call, has them blurring the poppier end of punk with more glam-Stones strutting, yet the overall feel like an early but more aggro-affiliated Tom Petty & The Heartbreakers. Dancefloor music this one, for you, your granny and whoever’s at hand. It bites deep as a guitar riff prepares for you a solo only to the song to finish, and one can only assume this will get extended live according to audience reaction on any given night.

‘Will We Ever’ expresses the fear of never performing live as a band again. It does so over strident bluesy slide rocker pitched against more mellow drifting vocal refrains, vocal harmonies, with lead voice raging towards the end as the keyboards encompass the sound threatening to drown him figuratively. ‘When The World Stood Still’ puts the previous number into context but opts to be performed as a gentle lullaby that drifts calmly in contrast to the actual words sung. When the guitar chords chink harder and Edwards’ voice strains more harshly it begins to sound remarkably similar to Leo Sayer.

‘Move Too Fast’ asks us to slow down and consider what we really want. This is an excellent funk rock groove, where the individual components of this band truly sound like one, reading and feeding off each other in symbiotic rhythm, feel and with textured sound. It’s a little laid back in a Little Feat manner but with a modern groove, and a softer sensual side to the whole affair. ‘Broken Words’ expands on the previous number tripping the light fantastic ever further – Hip beats, freaky distanced guitar riffs between the chinking of chords, and some modern R ‘n B harmonies are all in evidence. It’s crossover music.

Daylight’ is a brisker rock and roll number breaking into a drum beat with vocal patter while ‘Refuge’ is acid-tipped and more freeform. The final track is ‘Solid Ground’ where voice, guitar and the barest patter of drums filter through. It evokes the spirit of the late, great John Martyn in sound, theme, and almost song title. Soft, taking its time, it’s like the Cornish singer is taking a gentle walk across a sandy beach one morning, still cold but with spring on its way. The notes squeezed out with purpose in six string solo as the music underneath builds, swelling into slow dance mode. A fitting end, in a peaceful feelgood manner

It’s going to take further listening to unravel the lyrical ramifications of When The World Stood Still, and our sympathies towards them, but immediately one feels musically the band is on the right road. At times there are tunes that feel like The Rolling Stones could have had they decamped to the Everglades rather than France to record Exile On Main Street, while elsewhere there’s the feel of an angry Nick Lowe. Either way, the album’s worth listening to, likely to grow on me further, and bodes well for Wille & The Bandits as a working unit as they perform live when out on tour this year. 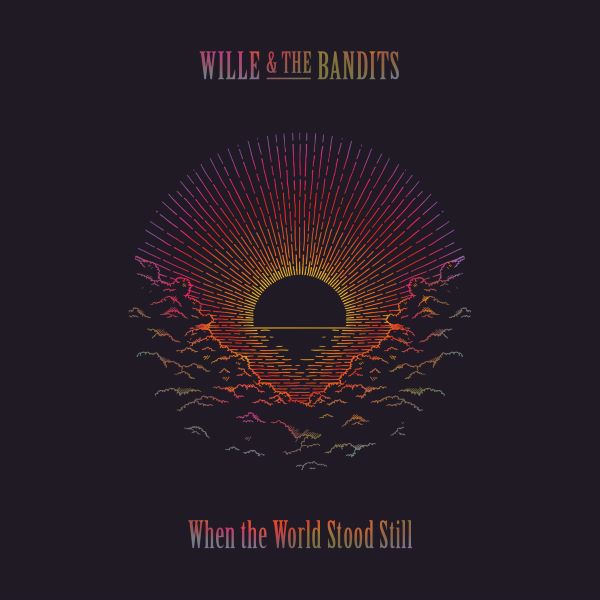