The Ganders deliver dirty heavy blues rock with a Foo Fighters nuance and a Britpop arrogance.  “This is only our second gig in four years” announces the trio’s vocalist/guitarist Daz Jordan explaining the road to fame and fortune didn’t turn out as planned so they ended up getting day jobs. He likes a good whinge but not everyone’s ready for sarcasm this early on a night out. Despite which, rough edges aside, when they play they’re a solid entity.

Rainbreakers bound on stage primed for action as only such young lads can be. They similarly flitter round the broader parameters of blues rock, albeit with a soul edge.  British boys selling us the same kind of west coast dream the likes of The Average White Band (minus the horns) and Charlie did back when I were a lad. Intricacies such as harmonies are drowned out by a bass heavy PA for the first few numbers and it’s not really until they reach the crushing  tear jerker of ‘All My Life’ where lead vocalist Ben Edwards can be heard to the full, and when it happens he holds the audience in the palm of his hands. They’re all able musicians; guitarist Tony Richards in particular has the air of a session player about him while bringing twists of personality to proceedings.

Funky rock riffs, staccato blues pop & soul from the same well Simply Red once drank at, or when beefing as if Free had recording at Stax. Rainbreakers are entertaining what’s become a full house here tonight, but the reality is they need to crossover to a younger audience, gathering the kind of fan base that will induce big time management to open its coffers and strengthen their career. Not everyone can make it on their own.

The Daily Telegraph rate them one of the three top unsigned bands in the UK and tonight Wille & The Bandits walk on stage with Cheshire cat grins to loud applause. Before long, those of us who’ve never seen them before are either wearing the same expression or have our jaws gaping wide open in amazement.

On record I like their blues meets roots rock with a social message credo, and that’s pretty much what we get initially, with most of their set taken from their latest full length self-release Paths. Add to that a lot of enthusiasm, good use of the stage and some strong musical interplay. Before too long though – They’re only gonna blow the bloody doors off the place!

Frontman Wille Edwards starts up the riff to ‘Victim of The Night’. He plays without a plectrum, an almost flip of the wrist movement to his right hands with finger tips catching strings, a more involved finger picking applied for more intricate notes. The PA sound is fine now, which is good because Matthews Brooks is using a six string bass. Edwards voice roars away with the tint of a Cornish accent, rising in pitch as he articulates and the band rock out, a row of people down front already dancing.

Guitarist and bassist meet middle stage, heaving and bopping as they follow through with the political beast that is the fuzzy infectious ‘Make Love’. Brooks proceeds to pogo on the spot as Edwards plays slide, the sound welling up with smiles all round as “Ah-ha” harmonies lead us into ‘Find My Way’ and drummer Andrew Naumann cuts through with his percussive sounds really giving it life and making a fine sound before the three take on a bolero approach as an echoed slide solo flies over before the sound gets gnarlier and juicily heavier. 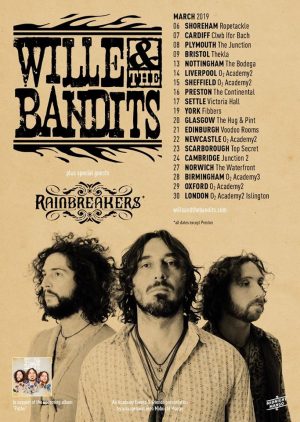 Swopping to an actual lap steel guitar, Edwards tells about his daughter and it’s apparent on his face how much joy she gives him. They play ‘Watch You Grow’ the song he wrote for her and it swings between Eastern psychedelic slurs to a more affecting vocal mood. Their cover of Fleetwood Mac’s ‘Black Magic Woman’ pays lip service to both Peter Green and Carlos Santana’s interpretations but also Dave Gilmour with echoed wailing as Naumann’s wooden blocks tinker hypnotically underneath, inexplicably somehow leading to a scorching metal solo over polyrhythmic backing. Some of that feel being kept for their own ‘Judgement Day’.

“We’re gonna get a bit funky!” declares Edwards and they come on like Little Feat bumping with a little Latin night time grind for ‘Keep It On The Down-Low’ and bound around the stage, with even Naumann’s hairy bonce seen shaking out merrily from behind his drum kit. Brooks takes a funky bass solo, followed by Edwards on six string first then pedal steel before they bring the song home.

Brooks tells of how they first began in Cornwall, busking while Edwards straps on an acoustic and they proceed to play a number from that era. This is followed by Brooks himself bringing out a stand-up double bass that he takes up a bow to as they play a song called ‘Mammon’. The bassist then applys orchestrated effects to his instrument and the overall experience being something akin to medieval prog rock until Naumann’s drums pound out loud and they play exploratively, Edwards singing out stray anguished words over power chords as ‘Four Million Days’ takes form. The whole thing edges out into something akin to Pink Floyd. “I believe in angels” sings Edwards and if only for the period of this song he’s not the only one here tonight.

Switching to a Les Paul for a bluesy slide intro and more political bounce with the boogie shuffle of ‘Find My Way’, half way through Naumann growls into a microphone and acts as spoof host for a battle of the guitars as Edwards and Brooks trade amazing solos. Ranging from country-picking to mind boggling Robert Fripp like runs, they face each other off as they duet progressively and then the trio return as one to conclude the main tune in righteous mayhem.

The audience is held spellbound, hands held above their heads still clapping as acoustic blues tumble into alt rock, Brooks double hand tapping on bass before they head out once more into a true progressive zone all their own over a wash of effected sounds spiced with jazzy runs. “We do this all on our own so thank you!” says Brooks of the handful of self-funded albums they’ve produced alongside this current tour and my admiration continues to go up immeasurably. ‘Bad News’ being the stomping heavy rock number they end on, before returning for a single encore.

Wille Edward’s curly hair now sits flat on his head and wringing wet from the sweat pouring down his face. Comparisons to a younger Pete Townsend are intriguing at this point, not least as they end with a song titled ‘1970’. All three sing along, taking a solo apiece, rocking and funking out with class through to the end.

Wille & The Bandits have supported the likes of Deep Purple and Status Quo and held their own. Frankly I wouldn’t be surprised if they have given them a good run for their money. This is a small stage but they use it well, there’s always been something going on visually alongside the many aural delights They are fully rounded musical partners, and have far exceeded my expectations of how this night would turn out.

My advice? Play their Paths album loud at your outdoor barbeques this summer, then next time they tour go in a big group and party the night away together. You won’t regret it.