Brought together by the biker lifestyle and a love of heavy music Wild Road Rollers have come to melt your speakers with their debut long player, Imperial Stout Motor Oil. A three piece very much in the vein of Mötorhead, they’re a no-nonsense bunch who deliver a bawdy, ballsy brand of rock that will appeal to fans right across the heavy rock spectrum.

I’m a big fan of three-piece metal bands. They produce a stripped-down sound that’s devoid of any frill; it’s just pure impact. Wild Road Rollers sit with the best trios (Anvil, Budgie, ZZ Top) and deliver an equally punchy sound. Opening salvo ‘I Should Be In Hell’ arrives like an avalanche and proceeds to swing like a huge wrecking ball. Rick Dickman’s bass is delivered with a ground shaking rumble and it’s underpinned by the marching army that is Albert “Boni”’s drumming. Guitarist and vocalist Lou Angelson has a nice throaty rasp that’s not dissimilar to Anvil’s Lips and it all adds up to a volatile admixture.

The aptly titled ‘Fire Thunderbomb’ crashes in like a fiery comet upon entering the Earths atmosphere and causes havoc like Thor throwing around lightning bolts. With the throttled constantly revved ‘Road Bastards’ is the soundtrack for an invading biker army and stomps with a huge monolithic sound that Black Sabbath would be proud of. The bluesy solo that erupts mid song is a thing of beauty and drips with Southern Fried goodness. ‘Hangover Day’ takes it foot off the pedal for a power metal cut but don’t worry; it’s more Skynyrd than Jovi.

‘Green Illusions’ is another stomper that’s wrapped up in a circling maelstrom which points to a space rock vibe and is akin to a four minute, brutal beatdown. ‘Desert Chaos’ is hard and heavy yet infused with a strong melody. The pounding drums and bass are interspersed with bluesy noodling, with each acting as a foil to the other. Patiently building a brutalist sonic structure ‘Rocker God’ is simply a huge Tower of Babel that rises above the listener and threatens to topple and crush with its enormity. ‘Restless’ finds the band back on familiar ground and rocks along like a fusion of Black Label Society and Down.

Wild Road Rollers debut EP (‘Dirty Rock n’ Roll Brew’) was released back in 2017 and ‘Imperial Stout Motor Oil’ features three tracks from that release, rerecorded; this records opening cut (‘I Should Be In Hell’) and these last two tracks. ‘No Brother Left Behind’ and closer, the all out rocker ‘Before I Count To Three’.  It’s interesting to compare how the band have evolved over the years, becoming fuller, more confident and much harder and punchier.

A limited edition 12” vinyl version of this album has just been released and includes a beer lovingly crafted by artisan brewery Tro Ales. Called Boozed Road Crew Beer it’s a mean 12% abv son of a gun ale that’s sure to knock you off your feet. A bit like this album really! 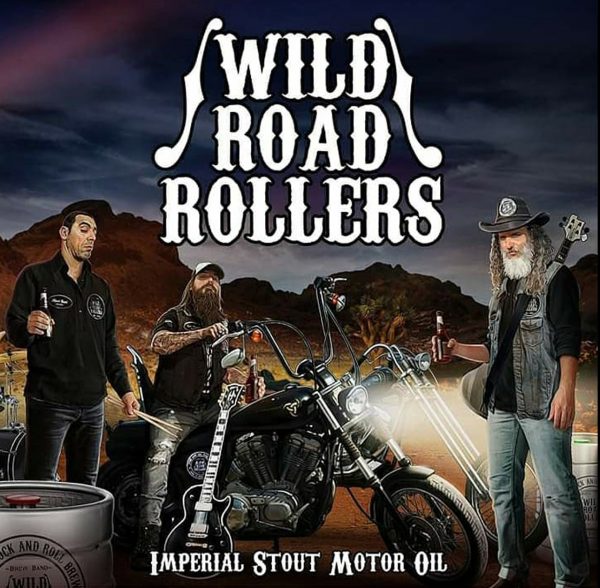