There are some bad Doods out there

Paul Castles reacquaints himself with Belgian warriors Wiegedood, whose new album was released via Consouling Sounds Records on February 10, 2017

I first came across Wiegedood at the Damnation Festival in Leeds in 2015. Their blistering aural assault held the attention of a large crowd throughout a compelling set and I was hooked. Their debut album De Doden Hebben het Goed provided the ammunition that day and now we have the follow-up, albeit with the slightly unimaginative title, De Doden Hebben het Goed II.

The album features four songs although as you will know by now if you’ve met these Belgians before, the complex and creative compositions created by this trio are scarcely served justice by calling them songs. They’re more like mini symphonies, each around 10 minutes during which an expanse of musical terrain is covered. The bulk of it is punishingly bleak and blackened which you would kind of expect from an outfit whose very name refers to sudden infant death syndrome.

The three members of Wiegedood have links with Amenra, Hessian Oathbreaker and Rise And Fall and came together under the flag of Wiegedood almost as a side project initially. Like a spooked stallion, things have kind of run away with themselves since that low key start and Wiegedood are now clearly defined as an entity that stands tall on its own feet.

While some bands only write in the studio Wiegedood are happy to fill in some of the downtime during recent tours to release further creative juices. De Doden Hebben het Goed II is the result. Wiegedood’s atmospheric aural attacks are immersive and invigorating and the four tracks unveiled here make for a collectively crushing listen.

‘Ontzielling’ is a furious firestorm of an opener raging with cranium crushing riffage conducted for the majority at lightning pace with the characteristic yelps and barks. The drumming is insanely fast, the mood full of hatred, creating an animalistic atmosphere in which only the fittest, or maybe the damnedest, survive. The hooks when they come almost yank your ear off and the bloodcurdling cries and destructively frosty feel rarely show signs of abating.

The solemn melancholic end of ‘Ontzielling’ bleeds into the start of ‘Cataract’ without any join visible, the riff just gently sitting on the breeze before eventually the same pattern is magnified into a much hairier beast, one that is almost salivating around the chops. On and on the riff goes, like an antiquated dinosaur slumbering and lumbering from one hefty foot to the next. The groove burrows so far into your skull that it almost comes out of the back of your head and for almost five minutes it plods on seemingly directionless whilst at the same time defined by its own seismic shape and sound. Eventually a thudding pause grinds things to a halt before what is effectively the second part of ‘Cataract’ kicks in, a more violent and visceral volley of sound erupting after a quick cry of aggression.

Wiegedood’s world is probably not one many people would choose to enter. If they could cross the road to avoid them then that defensive step is the one most likely to be taken. For those whose pulse races at these suffocating oppressive lines then De Doden Hebben het Goed II will be a long and loyal friend.

The criticism if you’re requesting one, is the four tracks only cover around 30 minutes so maybe there’s room for one more song. Of what we are provided with the album’s title track is certainly the most abstract. The first phase of the song consists of what could be taken for a rustic church organ relaying a singular lengthy drone the only accompaniment to which is a horrifically barbaric cry of the type that would have you looking over your shoulder if you heard it in your sleep.

‘De Doden Hebben het Goed II’ then awakes with a rousing driving beat which by the desperate standards laid down by these nihilistic Belgians almost carries a smack of positivity. If you want to pump your first then this may be the moment to oblige. The repetition may grate with some but for others these extended passages of purgatory help reinforce the Wiegedood way, one in which half measures never suffice.

At around six minutes ‘Smeekbede’ is the shortest of the quartet but as before the toxicity levels are heightened by levels of feral fury that would leave a zoo handler making double sure that the gate was securely locked. It’s bloodied, bitter and biting and you don’t want to get in its way as when fully roused, such as here on ‘Smeekbede’, Wiegedood are a frightening proposition as they steadily pack the building bricks around them each adding to the formidable wall of blackened sound that threatens to tear the hairs from your chin. 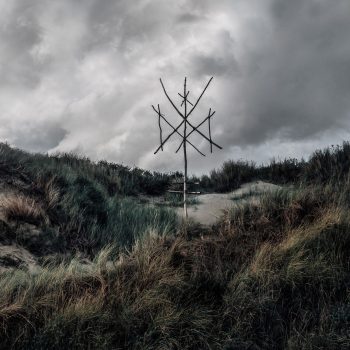