Paul Castles finds the sax appeal on White Ward’s debut album music to his ears, released via Debemur Morti Productions on 12 May 2017

Square pegs and round holes… no matter how hard you try the two simply don’t go together. It’s a little bit like White Ward’s new album which carries splinters of death metal sharp enough to draw blood but surrounds this with jazz, prog and vague vocal missives. Depending at what point you cut into Futility Report a different hue will be experienced – not everything then is black and White…Ward.

Take the opener which begins with obscure vocal ramblings. ‘Deviant Shapes’ eventually stirs itself as an explosion of noise is sprayed like champagne across a furious blastbeat backdrop only for things to go all proggy on us with some extended guitar action and the tempo reined in to something approaching a jog, if not quite a stroll.

That’s not to suggest that Futility Report isn’t an impressive album, and the heartfelt cries at the beginning of ‘Stillborn Knowledge’ are wrought with soulbaring intensity. As the track moves on the clean well measured guitar work acts as a solid scaffold from which to drop the visceral vocals when the time is right. There’s imagination and creativity oozing through its pores, while some of the more intricate solos smack of experience and endeavour. The track almost ends as though in a bar-room saloon with a majestic sax adding a layer of warmth before gently sloping out of sight.

This certainly isn’t what you would expect from a black metal band from Ukraine, although as already made clear White Ward are far from your average BM crew. A lengthy intro on ‘Homecoming’ takes on a more vigorous outline when the tortured vocal strains arrive and these in turn signal an increase in melody as White Ward start to showcase their impression rhythmic range. With turns sharp enough to secure a job as a getaway driver, White Ward are able to channel their impressive energy levels into differing directions while showing the enviable authority to hold things in place as the musical gears are engagingly explored. 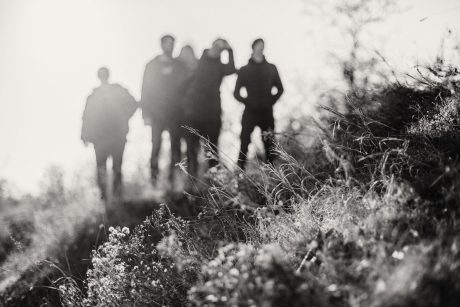 Throughout, the mood is somber and although jazz is integral to White Ward’s musical approach it is not the raging experimentation from say Shining. In the softer almost avant-garde moments it’s almost coffee table stuff, and indeed the instrumental ‘Rain As Cure’ would almost pass muster for one of the old Cinzano ads with Leonard Rossiter and Joan Collins (with apologies to those who know neither!)

The flames burn brighter on ‘Black Silent Piers’ which is pacier and upbeat as the ambient elements are briefly pushed to one side as White Ward go for the jugular with a more straightforward black metal approach. Even here the sax contribution of Alexey Iskimzhi is both welcome and significant and elevates White Ward’s atmospheric work to something above the obvious Satanic slayings. Early on the band asked Alexey to contribute some sax at opportune moments. Such was his impact though that his contribution is now deemed vital to White Ward’s sound that cascades and sweeps almost like the waves from the Black Sea that provide the backdrop to their daily lives.

The closing title track is much darker and better reflects the influence of the likes of HP Lovecraft. White Ward’s mood swings delve into the darker recesses of the human mind and that is apparent on this moody but magnificent album closer. With the sax adding some poignant peaks to the slow-moving soundtrack, when the vocals do arrive they’re deep and ravenous, signaling a tempo shift midway through. The metalcore moments are well worked and for a debut full length to have so many interchanging strands is a testament to White Ward’s ambition and ability.