Back in the mid-80’s the Roadrunner Records label was a seal of quality. They certainly had their finger on metal’s (steely) pulse, and it seemed that every week they’d release another soon-to-be-classic album, and they nurtured some of metal’s best talent (Slayer, Metallica, Mercyful Fate). Of course, amongst such illustrious company, it was easy for bands to get lost in the shuffle, and that was certainly the case with New Jersey’s Whiplash. During 1986-1989 they released three stone cold classic thrash albums which, for some reason failed to elevate them to metal’s top tier. As if to remind us of our folly, those three albums have been collected as The Roadrunner Years which demand some long overdue re-evaluation, and cultural elevation.

There’s nothing quite like the sound of a thrash metal band in full flight, and Whiplash’s debut album Power And Pain found them entering hyperdrive. Things immediately race off the Richter Scale with ‘Stage Dive’, and they rarely slow down over the next 34 minutes. Taking their cues from the rowdier end of the NWOBHM (Venom, Raven, Tank) Whiplash dish out a musical pummelling, and there’s little in the way of redemption as drummer Tony Scaglione and bassist Tony Bono combine to create a mighty swing, whilst guitarist Tony Portaro seems intent on jamming as many notes into the shortest time possible. Portaro also provides vocals and he unleashes some earthly screams much in the vein of Kreator’s Mille Petrozza, and in doing so signposts the blackened thrash of the early ‘90s.

Nowadays we’ve become desensitised to extreme music, so it’s hard to emphasise just how ground-breaking Power And Pain was. Needless to say, until Slayer dropped Reign In Blood later in the year, no-one could hold a (black) candle to Whiplash. This a high-octane brand of thrash that owes much to punk (especially the hardcore variety) and it definitely has that crossover appeal of bands such as the Cro-Mags, and backing vocals came courtesy of Peter Steele (Carnivore) Vinnie Stigma (Agnostic Front). Three types of metal rolled into one, ‘Power Thrashing Death’ is as vivacious as the title suggests, while ‘Spit On Your Grave’ is played so fast it appears to be rotating backwards. On an album that lives life in the fast line ‘Nailed To The Cross’ takes things to a whole new level, and set the standard for all who followed.

Bookended by two instrumentals that are filled with explosions and diving Stukas, Ticket To Mayhem followed its predecessor by a mere twelve months, yet the rate of evolution is exponential. Fans needn’t worry as there’s been no radical departure from the band’s core sound; this is still raw thrash that’s tailor made for stage diving into raging mosh pits. However, Whiplash have broadened their palette and ‘Last Nail In The Coffin’ trades speed for power and punctuates its heaviness with bright, sparkling guitars. Likewise, ‘Drowning In Torment’ is full of neat time changes, and while they may not be perfectly executed, this only adds to the bands rough-hewn charms. These new developments make for a more satisfying, rounded listen with the musical dynamics acting as a mirror to highlight and enhance the other.

Ticket To Mayhem’s production is a real boon, you can hear the squeak of the drum pedals along with fingers plucking bass strings which enhances the overarching feeling of aggression. This album gets heavier as it progresses with ‘Snake Pit’ being a multi-headed medusa, which squeals and spits venom in every direction. Joe Cangelosi has replaced Scaglione on drums and his hard-hitting, measured style has enabled Whiplash to move beyond the three-minute thrashers and subsequently tracks such as ‘Spiral Of Violence’ veer into more epic territory. However, there’s plenty of neck-snapping moments, such as the penultimate ‘Respect The Dead’ which slays all its path with plenty of razor sharp riffage. As with its predecessor, this album is a pretty brief affair, but with music this extreme Ticket To Mayhem benefits from its own brevity.

Released in the summer of ‘89, Whiplash’s third album Insult To Injury polarised the band’s core fanbase. The recruitment of vocalist Glenn Hansen turned the band into a four -piece (allowing Tony Portaro to concentrate on guitar) and while Glenn is a solid singer with an impressive range, his addition has altered the band’s chemistry in an important, but imperceptible, way. Portaro’s guitar work is no more noticeable with Hansen’s arrival, if anything he seems more subdued, and while there’s flashes of his former frenetic fretwork fireworks (such as on ‘Essence Of Evil’) they prove the exception rather than the rule.

Producer Tom Morris (assisted by the legendary Scott Burns) has given the band a clean, expansive sound but it’s removed the raw edged, wall of sound that made Ticket To Mayhem so appealing. Overall, Insult To Injury reeks of record company interference; you can almost see a businessman’s brain working; add a quality vocalist, record at a top studio (Morrisound) with top staff and a band should hit the big time. Unfortunately, it didn’t work. That’s not to say this is a bad album, far from it, and Insult To Injury sounds technical and crisp in a Watchtower Control And Resistance type way, but when I listen to Whiplash I want to hear that fingernails-scraping-blackboard, no-holds-barred thrash-athon they did so well.

After these three albums Whiplash went on a lengthy hiatus before reforming and releasing several records, but if you want to know why the band are so revered by thrash metal afficianados, then the answer is right here in The Roadrunner Years. 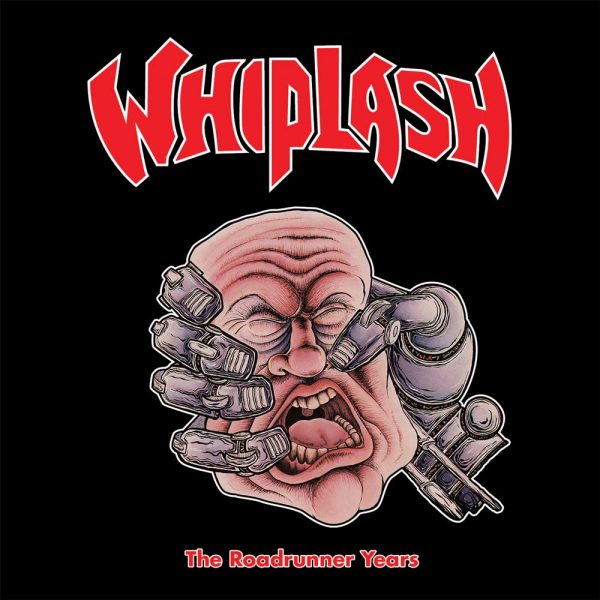