Ready to send a shockwave through the whole UK

There is an ever-growing feeling in rock music that file sharing and poor management and backing from record labels is making it incredibly difficult for young, up and coming bands to breakthrough. While I do agree with this notion, I am also of the opinion that if a band possesses enough talent, enthusiasm and the correct work ethic, nothing can stop them making a name for themselves. Enter When We Were Wolves.

Heartless is the five-piece from Newport’s second EP following on from 2013’s The More Things Change, The More They Stay The Same. Heartless has the same fierce, punchy and unforgiving sound as its predecessor with the addition of a masterful performance on vocals by Mitch Bock.

The EP kicks off with the standout song from the bands short but accomplished career so far, ‘Dying On The Inside’ is one of those songs that When We Were Wolves could play at the start, middle or encore of any live show they play and still get a reaction, if anything the song is a statement: When We Were Wolves are band that are here to stay.

Any fears that such a pulsating start to the EP may be hard to keep up are soon washed away by following songs ‘Devil You Know’ and ‘Blind’ which both carry a different, but equally powerful punch of their own, the latter those face melting riffs and brutal vocals that current When We Were Wolves fans will be familiar with while ‘Devil You Know’ provides an anthem-like sound which while surprising is equally as pleasing on the ears.

Closing tracks ‘Confession’ and ‘Heartless’ are both in the same vein as ‘Dying On The Inside’ but both exquisite in their own way showing a level of versatility that can create a fan-base big enough to accommodate those who love a bruising mosh pit and those who love a good old fashioned sing/scream along.

Usually when reviewing a record/EP I ask myself what has it got? What makes it good/bad? On this occasion I’m asking myself what hasn’t Heartless got? With this EP, When We Were Wolves have put themselves in a position to send a shockwave not only through South Wales, but through the whole UK. 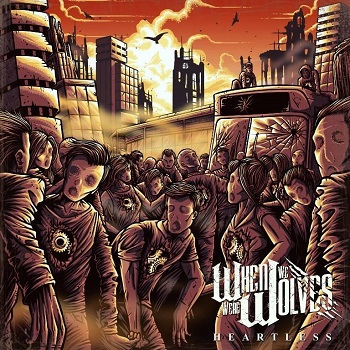