In a case of strike while the iron’s hot or get in there before all the dodgy bootleg footage appears on Youtube, When Rivers Meet has released a live album, recorded during their recent April/May UK tour.

Either way, monies earnt go directly into the coffers of the band, their fans can hardly complain. From their grass roots beginnings, husband and wife team Grace and Aaron Bond (vocals, mandolin, fiddle and guitar shared out between them) to their steady rise as support act and the recipients of five UK Blues awards, they went out as a full headlining band this Spring, bringing in Roger Inniss (bass, musical director) and James Fox (drums, keyboards, backing vocals) to fill out the sound and offer more musical diversity.

Bestowed further UK Blues Awards during the tour, their exuberance was apparent to anyone who caught any of the dates. Live, they entertained; expanding on their recorded work, or so we recall. Caught up in the moment, maybe things weren’t actually as good as believed in hindsight? If not, this album will reveal how so.

Amid what sounds like a siren and collective audience screaming away, Aaron Bond’s slide guitar starts pummelling away, adeptly assisted and counterpoised at assorted interjections by Fox’s drums. Lacking a question mark, ‘Did I Break The Law’ sounds more of a statement than ever, overall driven and intense, its blues rock boogie is still some wherein hidden between the cracks, but it’s piling on down like Rose Tattoo running at 11.

From the get-go the recorded sound appears to be mostly clear, an honest representation of a club date on a hot night out, with what appears to be a large contingent of females in the crowd, no doubt enjoying the guitarist as added eye candy, while admiring Grace as equally attractive, empowered while being loved-up, and of course talented; the two sections of the song where Grace callss out “Here we go…” before repeating the words “Oh, yeah-yeah!” prove as I thought, live she can really belt out a song.

For ‘Walking On The Wire’ a slower wave of slide washes over this more ponderous heavy blues rocking, the rhythm section comes down hard but as the frontline are often duetting here at times it breaks up the aural flow until you become accustomed to it.

Shifting focus, ‘My Babe Says He Loves Me’ initially comes on like early Fairport Convention, or similar, with its vocal only intros, later intersections drifting into grander medieval styled folk passages. Despite which, the overall lasting impression of the song is its triggered power chord pull-offs wherein Grace squeals giddily like the old Midlands’ Lemon Squeezer in his prime, during moments of ecstatic frenzy.

From the sexy to the sensual we get ‘Battleground’. Inniss’ bass ruminating through this vary-paced number, the Bonds’ combined voices making an agreeable humming earworm, while Aaron’s lead hollering adds excitement to the mix.

Acoustic strummed folk ballad ‘Don’t Tell Me Goodbye’ has an early sixties feel, and they sing together and each take a different verse. It’s tender, heartfelt and the crowd obviously know and adore it with them joining in big time. There’s the odd onstage laugh and inarticulate in joke, somewhere midpoint, that might make those who’ve not seen them live confused, and for those of us who have and recall the number now pondering how much of that night was spur of the moment and which bits rehearsed. Either way, musically in the set it proves the right moment to offer a change of pace, before turning into overdrive.

Another joint vocal delivery, ‘Free Man’ is a sliding blues stomp, that inches progressively into Zeppelin territory as it develops, getting even deeper down the rabbit hole with the staccato-riffed ‘Lost & Found’, big drums and distorted bass solo throw in for good measure, while the vocals come on like a mantra. ‘Innocence Of Youth’ features a slide intro played over a clapping crowd, the song itself stopping half way to reprise that moment, and one is essentially a John Hooker number for the Instragram generation.

Again, an acoustic ballad shifts the mood. Gothic murder ballad ‘Bury My Body’ with its well-matched harmonies and thoughtful mourning violin solo outro is a highlight. Building on this, Fox plays piano for ‘Tomorrow’. Folk in All About Eve manner, the crowd’s enthusiasm tends to outweigh their vocal talents, and so the song’s tenderness gets lost in amiable mass translation.

‘Kissing The Sky’’s bass riff opening is reminiscent of a funkier taken on Edwin Starr’s ‘War’ until Aaron Bond’s angular riffing enters the scene alongside Grace’s long-held sung notes, developing into a steady pop rocker. It also features what I first heard as a saxophone solo, but is in fact violin.

With an almost Buzzcocks style guitar chording, main event final number ‘Want Our Love’ is not so much angry but hungrily defiant compared to its studio recording, and how too I recall it live. The crowd is large and militant with their “whoah-whoah” participation, thereafter Grace Bond soaring high in her vocal delivery, they start hard rocking towards a big finish.

With still enough energy for an encore, listeners get a power pop guitar hooked ‘Testify’, the overall impression is Shakespears Sister gone symphonic rock (albeit an obligatory modern single radio edit version), and that’s your lot.

A fair approximation of When Rivers Meet’s set at the time, differing arrangements hear from some of the studio recorded tracks, live enthusiasm rendering some speedier and rawer in approach, undoubtedly Grace Bond live reveals herself a singer of immense range.

No instruments appear to have been overdubbed for this recording, thus the sound we get is a pretty honest interpretation of the overall talents present there each night on the tour, the rhythm section adept session fellows who I seem to recall only officially signed on just prior to the tour. That the Bonds have developed a strong bond (pun unintended) with their audience, and vice versa, is apparent, and something you hope will continue. However, there are times when you question aurally if as listener one is intruding on the intimacy of a big private party when one wants to be overawed and experience a larger-than-life band ethos. Heck, we should all have to face such problems. The good outweighs the personally-prejudiced here, and if it acts as a heathy stop-gap before the next stage of their forward-protectory career, who am I to complain. 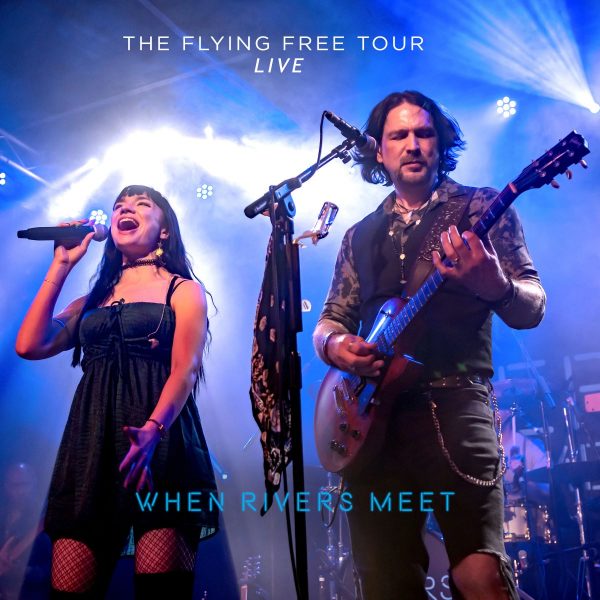