Readers out there of a certain age will know exactly who Wendy James is. They will have had posters of her on their walls and harboured multiple NSFW fantasies about her. As the singer of Transvision Vamp she burned phosphorus bright for 3 years – she was manna from heaven for a then largely male dominated media. She seemed to live in the Top of The Pops studio, forever clad in tiny lace dresses and DM’s. Whatever your choice of music mag was at the time – NME, Smash Hits, The Face – there she’d be, all legs, leather, peroxide and pink lipstick pout. She was a glorious contradiction, dressed like a Ramone but playing power pop, espousing hard line feminist theories while wearing not very many clothes at all…and we all loved (lusted?) her for it.

She was the anti-Kylie. Dating Mick Jones of The Clash and becoming part of the Ladbrook Grove set. A singer, a model, a provocateur, her band coming on like a West London Blondie, shifting mega units of albums, singles and, presumably, tissues to teenage boys. Not that this writer would know anything about that…

Anyhoo! Transvision Vamp’s time may have been explosively brief but, after the flame blew out, Wendy James had no intention of disappearing. In true Spinal Tap fashion her appeal became more selective. She contacted Elvis Costello who assisted her in writing and creating her brilliant and somewhat overlooked debut solo LP. She then pretty much stepped away from the dazzling glare of fame to continue doing her own thing. And doing it well, honing her muse, discovering her sound. Resolutely going her own way.

Which brings us to 2020 and ‘Queen High Straight’, her latest album. Written, produced and mixed entirely by James, it’s a double album. A proper double album. 4 sides of vinyl, sequenced in the order it was written, chock full of varying styles and genres, it ebbs and flows, laughs and cries, meanders and smacks you round the back of the head to suddenly demand your attention. It has occasional filler and whimsy. It’s too long. In short, it’s a classic, old school double album, everything a double album should be. Pure, decadent indulgence, and arguably James’ finest work to date.

Wendy James splits her time these days between Paris, London and New York (would you expect any less?) and this album is, more than anything else, a product of these environments. The cynicism and iconaclasm of London Taaaahn, the widescreen, CBGB’s insouciance of New York and, more than all this, the Euro sophistication of Paris. Just listen to the title track (above). It’s lazy 60’s vibe, its breathy sax and jazzy ambience, it’s nihilistic rebellious cool – “it’s not easy being an outlaw in times like these”. It’s the soundtrack to every black and white Nouvelle Vague film ever made. It’s the aural equivalent of Jean-Paul Belmondo, gauloises dangling from his bottom lip, cool hat perched jauntily atop his head, giving the camera his best fuck-you-if-I-could-be-bothered shrug.

So, yes, lots of tres classy Euro-sophisto fare, all immaculately done. Tambourines and beat poet lyrics, hazy summer days and time to kill…as long as you do it coolly, daddio, preferably in a coffee bar, listening to live poetry. Gentle, Bacharach-esque horns abound, as do groovy keys and husky multi-tracked backing vocals. Hell, there’s even the occasional burst of Gallic accordion.

But that merely scratches the tip of this particular iceberg. There’s so much more. The guitars of yore haven’t been abandoned. ‘Perilous Beauty’ roars with the ready-to-rumble glamorous ennui of classic Stooges, with the added decadence of James’ kittenish purr. ‘Here Comes The Beautiful’ is amped up 60’s psyche pop with added ‘Search and Destroy’ stylee lyrics (“I’m a stove-pipe silhouette”). Glam, dangerous, elegant, bored…all of this.

There’s some flawless indie pop in here too, ‘Heart Breaking Liar’s Promise’ harks back to her Costello days while the instantly hummable ‘Cancel Tuesday…’ recalls the gentle whimsy of The Kinks. It’s a glorious grab-bag, a magpie’s nest of impeccable taste and appropriation, and all done in the best possible taste. There’s no Zeppelin thievery going on here, James knows her stuff and doesn’t hide her influences, they flows through her veins and are as much hers as theirs, it’s the music she’s lived and she’s a vital part of its time-line. Plus there are some killer song titles – ‘Bar Room Brawl & Benzedrine Blues’ anyone?

But it’s on Side 2 (or discs 3 and 4…ask your dad) where she really starts to…explore the space. A 60’s girl band influence is apparent, but then who isn’t influenced by Motown. ‘Sugar Boy’ in particular is a doozie – it’s a potted history of 50s/60s rebel music. A bubblegum, punk-o-rama, Stax, rock ‘n soul leader of the pack produced by an acid-gobbling, gun-wielding, Ramones fixated Phil Spector.

There is a dash of traditional Country (with trad jazz breaks, obvs), there are heads-down, three minute full frontal assaults of punk, there’s retro, angular, New Wave riffage. Oh, and attitude to spare – “You’re mine now, clown”, “shit happens, you just deal with it”- it’s all eminently quotable, James ain’t just a lyricist, she’s a writer. Like Mike Scott, her love of words shines through. And what’s ‘Bliss Hotel’ all about? Is it Bangles? Beatles? Not really. It’s all of this and none of it. Idiosyncratic guitar based pop music is what it is, wrapped lovingly in sugar and cyanide.

But what it is more than anything, and this is where it genuinely shocks, is positive. Joyous. Happy. James has lived several lifetimes in the service of rock ‘n roll and has, you would expect, more than earned the right to be bitter, cynical, aloof and misanthropic. And yet she’s clearly none of these. She’s open, vulnerable, alive to the possibilities life has to offer and that shines through every groove of this album, even when the lyrics take a turn towards the dark. It’s an album to indulge, to wink at and allow to gambol and make mistakes. It’s an album to fall in love with. Hopelessly. In Paris. While wearing shades.

“Give me the chance to dazzle you” she breathes. Oh alright then. 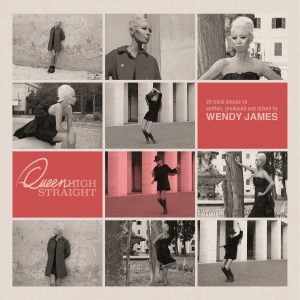