It’s a rock album! It rocks!

Yes!! A rock album! An album that rocks! And that’s pretty much it – no gimmicks, no genres, no agendas. It’s just a rock album and, let’s face it, that’s why we’re all here in the first place. The formalities? Welcome Back Delta are a 4-piece from Cheltenham, formed in 2011 and ‘Sucker’ is album numero two – rapidly following on from Ep ‘Growler’ and debut album, ‘Shocker’.

So, let’s not waste any more time ‘cos WBD certainly don’t. To be fair, there’s not much in the way of blues initially, it’s all straightforward, no nonsense Brit biker rock. ‘Beast Mode’ flies out of the gate – shades of The Almighty with a bit of an AC/DC breakdown before it roars down the highway again. ‘Snake In The Grass’ has a black sheep, bloody knuckled, boozed and bloozed bastard offspring of a John Sykes riff. There’s a healthy dash of Southern rock in this stew too – anyone remember Raging Slab? Joe Kelly hollers frantically about “truck stops” and “regulators” and the solo, when it hits, is to the point and takes care of business…none of that girly showing off here thank you very much.

‘Thrones’ is bruising and short, slightly fuzzed and Doomy…oh, and heavy…proper heavy. A gritty John Lee Hooker intro leads us into the brilliant ‘Arms Dealer’ which instantly tops my list of blues songs of the year. It’s mean ass blues, no B.B.King glitz and showbiz, it’s (and here’s that word again) proper. Real. Not intimidated or cowed by it’s forefathers but instead moving it on in their own ‘fuck you’ style. A classy solo slams its way in between some Muddy Waters inflections and road gang backing vocals.

The blues rears it’s head again with the greasy slide guitar of ‘Black Tie’. Kinda like Seasick Steve…but 40 years younger, fucked up on moonshine and with a ‘born to lose’ across his back. ‘Preacher’ has an AC/ZZ choogling riff and filthy twin lead guitars that hang around in a back alley with Thin Lizzy and the Allmans. Is there a Cheltenham in Alabama?

Elsewhere we have plenty of powerchords and bad intentions. ‘Jeremy’s Iron’ ( seriously, they had me at the title and the above video is a thing of low budget genius), reminds me slightly of Zodiac Mindwarp with its lyrics about “snake haired women” and “decapitation takedowns”, plus, just when you think it’s about to crash to a stop it lurches into a brilliant slow Doom riff. There are plenty of gnarly odes to the road – they sound like the kind of dudes you wouldn’t fuck with in a roadhouse. But there’s a joy to all of this – they are clearly loving every minute of the ride.

It’s the sound of wide open roads, chrome exhausts, barroom brawls and oily, dusty, sleeveless denim. And a strong contender for album of the year. 2016 seems to have been scripted by George RR Martin, major players are dropping like flies – but new contenders are arising, jostling for position and Welcome Back Delta are elbowing their way to the top of the pile. Try stopping them…I dare ya. 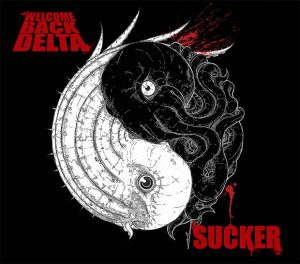