With some albums you only have to hear a few notes and you’re hooked and that’s certainly the case with War Curse‘s sophomore effort Eradication. This quintet from Cincinnati, Ohio, infuse old school thrash with a healthy dose of modern energy and the resulting sound recalls the glory days of 1986 when the Bay Area ruled the roost whilst simultaneously signposting the future.

This meeting of past and present is perfectly exemplified by opening cut ‘Asylum’. The track fires up the album like a combustion engine with each drumbeat a tripwire detonating explosives. Riffs ricochet off each other to create a neck snapping, chugging sound while the vocals are bold as brass and in-your-face. Featuring a guest appearance by former Forbidden and Testament six stringer Glen Alveais and he brings a touch of those two bands along with his own unique style. In terms of album openers it’s a clear statement of intent and, as introductions go, effortlessly ranks alongside ‘Battery’ and ‘Extreme Aggressions’.

With the nucleus of the band (guitarists Joshua Murphy and Justin Roth plus drummer James Goetz) being present since the bands inception in 2013 War Curse share an undeniable chemistry that verges on telepathy. This ESP explains all the neat time changes that pepper Eradication which are handled with ease. Along with bassist Jason Viebrooks (Exhorder and Heathen) this gives War Curse a solid foundation and they build their songs from the bottom up. Dictated by some monumental drumming next cut ‘Sands of Fate’ would make the perfect soundtrack to a world perishing in flames and it’s gritty lyrical realism sets the band apart from the usual demonic fare. Like Vio-lence at their most effervescent ‘Possession’ finds the band firing on all cylinders and contains all the right ingredients from the groove laden swing to the pounding drums. The riff reminds me a little of Megadeth’s ‘Take No Prisoners’ and those who like the clear, crisp production of Rust in Peace will revel Eradicationwith it’s equally metallic sheen.

With no signs of slowing down ‘Serpent’ keeps up the frantic pace but the band are not all bludgeon and blitzkrieg as there’s plenty of variety within to keep things interesting. In the second of three guest appearances Kragen Lum (Heathen and Exodus) brings his considerable talents to proceedings and his unmistakeable, atmospheric solo brings yet another shade to ‘Serpent’. Like a mixture of Machine Head and Xentrix ‘Eradication’ is a worthy title track; heavy on the bass drum and littered with complex guitar riffs it’s a memorable track that’ll haunt you long after the disc’s stopped spinning. Current Exhorder vocalist Kyle Thomas shares vocals with Blaine Gordon on ‘Deadly Silence’ and their words bounce off each other nicely, much like the guitars do. Album closer ‘Polluted Minds’ pulls all the various strands together and presents them in a suitably six-and-a-half minute epic track and as the song fades it feels like this is just the beginning.

Eradication sees the explosive debut of Blaine Gordon on vocals, who replaced Tarek Puska in 2017, and with an impressive vocal range he’s certainly put his own stamp on this record. It’s an album that finds War Curse on top form with all their constituent parts locking together to put an authentic spin on the classic thrash sound. And while the band aren’t reinventing the wheel there’s enough inventiveness here to please old and new thrashers alike and Eradication could just be the album that propels War Curse to the next level. 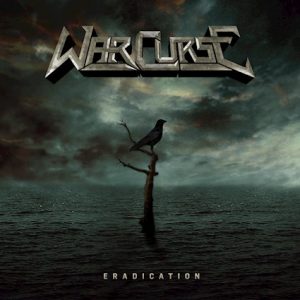