So, if blues lifer Walter Trout decides to release an album of covers, you can be pretty confident it’s not going to include anything as glaringly obvious as ‘Rollin’ and Tumblin’ or ‘Dust My Broom’. He has a lifetime (several lifetimes) of experience, it flows through his veins, hell, he’s a walking encyclopedia. This, you realise with glee, is going to be deep, deep stuff.

We kick off with the above track, which, although written by Jimmy Dawkins, could be about the man himself. Trout is clearly in fine voice here and backed by a top drawer band. He’s playing with the power and taste of prime Clapton, his guitar singing and crying as it takes off into an extended solo. And you immediately get the feeling that great care and attention has gone into these selections.

Also instantly apparent is that this is no airbrushed smooth blues love fest. It’s raw, fiery, ballsy stuff, played with passion and hunger. Several of these songs are banged out effortlessly, this band will have been playing stuff like this for years, decades – it’s become instinct and it’s all executed to perfection. So, you asked warily, are they sleepwalking through this? Fuck no (in a word…two words) – play in a blues band? Well, just try playing this stuff half as well as Trout and co. you’ll rapidly realise that you can’t, nor will you ever be able to. They’re that good.

So yes, where were we…oh yeah, song selection. Mr. Trout clearly has a few things to say about the state of the world. ‘Be Careful How You Vote’ clearly names no names – and how could it, it’s author, Sunnyland Slim, died in 1995. But it’s message is incredibly timely and surely not chosen randomly. “You can’t do no more, he rich, you po'”, howls Trout in this unchained roadhouse romp, while harp and guitar snarl at each other.

Trout also tips the hat to his old mentor, John Mayall in the cool and downright funky ‘Nature’s Disappearing’. It’s an environmental blues, urging us to do something…NOW (which was, at the time of writing, 1970. The more things change huh, kids). Trout rails against non-recyclables (that Mayall was seriously on message) against an impeccable groove, the song itself a bluesy companion piece to Marvin Gaye’s ‘Mercy Mercy Me’.

Oh yeah, that reminds me. Soul. Proper soul. Gutbucket soul. These guys do that too. ‘Woman Don’t Lie’ is gritty, unpolished stuff, fierce and funky. Resolutely badass with a superfly solo. Trout and Sugaray Rayford out-holler each other, trading soulful verses in this standout track.

Any other guest stars on here? Only Mr. Robbie Krieger! The band recorded the album in Krieger’s LA studio and Trout eventually persuaded the man himself to strap on his SG and lend the album that unmistakable Doors sound. Y’know, that tone from ‘Little Red Rooster’ on The Doors classic live album – it’s right here! Cool, far out, spacey with just the right amount of fuzz – you can feel the ghost of Morrison in the background…”you can pick your teeth with a New York joint”.

We end with ‘Gods Word’ – Trout testifying over gospel keyboards before weighing in with a seriously gnarly solo, Jimi nodding on in approval. It roars to a finish with a tone you won’t forget in a hurry. This is a quality release by a veteran, a pro, a front-line grunt who never goes through the motions. The song choices will hopefully inspire people not familiar with the artists to investigate and rifle through those old blues racks. Trout is no mere survivor. He’s a fighter, a warrior, playing with class and fire. Here’s to him. 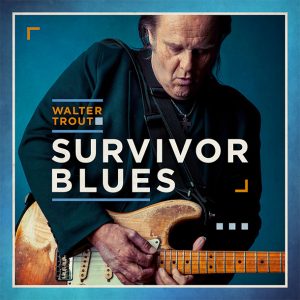