Preconceptions can be a very dangerous thing. When a new release arrives titled ‘Pictures at an Exhibition’which is a tribute to the late Keith Emerson, who would have been 75 on the day the album landed, then you immediately think it will be a cover version of the album originally recorded live by ELP at Newcastle City Hall back in 1971. Well how wrong could one be? German progressive space rock band Voyager IV have completely gone off in their own direction and refreshingly provided their own interpretation on the original ‘Pictures at an Exhibition’ suite of ten pieces composed for piano by Russian composer Modest Mussorgsky back in 1874.

The musical DNA of this pioneering showpiece for virtuoso pianists has been given a modern sound that is full of unique musical components and extremely good it is too. Showcasing four very talented musicians, Voyager IV are lead from the front by main composer Marcus Schinkel on keyboards and piano. This is the guy who provides elements of classical music and jazz fusion throughout the recording, which still at its heart remains a piece of rock theatre. He is reportedly the only person in the world who can freely improvise all nine Beethoven symphonies in a jazz style. Listening to him on numbers such as ‘Gnomus’ and ‘Catoacombae/Cum Mortus In Lingua Mortua’  he concocts a rather sumptuous banquet alongside his type of mad professor performances that can be witnessed on the accompanying videos. Why is this guy not better known in prog circles? His playing ebbs between passages so delicate they almost sound luxurious to spacey atmospheric keyboards that flare right up into a riot of emotion.

Interspersed between the instrumental numbers are some fine vocal performances from Johannes Kuchta. He is not far removed from Peter Gabriel, at his best, and on ‘Samuel Goldenberg & Schmuyle (From My Point of View)’ and ‘Promenade II (From The Land Of Feathers)’ he just sounds so at ease fitting in perfectly with the brilliantly composed music. It all feels wonderfully gentle and kind of nostalgic, in a melancholic style, so that you don’t actually need to listen too carefully to the lyrics to appreciate what the song is about.

Deviating from the main theme is the inclusion of two cover versions which sit nicely and do not stray too far from the Mussorgsky cycle. Firstly, the ELP classic ‘Lucky Man’ is re-imagined in a striking manner. The spine chilling piano playing in the middle lifts this to a level that almost surpasses the original. It is an elaborate and beautifully paced piece that unfurls into a true prog rock masterpiece. Finishing off the album is a cover of King Crimson’s ‘Talk To The Wind’ which maintains the relaxing nature of the original.

Voyager IV have not been afraid to innovate and the combination of Marcus Schinkel, Johannes Kuchta, Fritz Roppel (Bass) and Wim de Vries (Drums) have delivered a masterclass that is full of honest musical freedom which is polished like a diamond. This has been a pleasant and fascinating surprise. 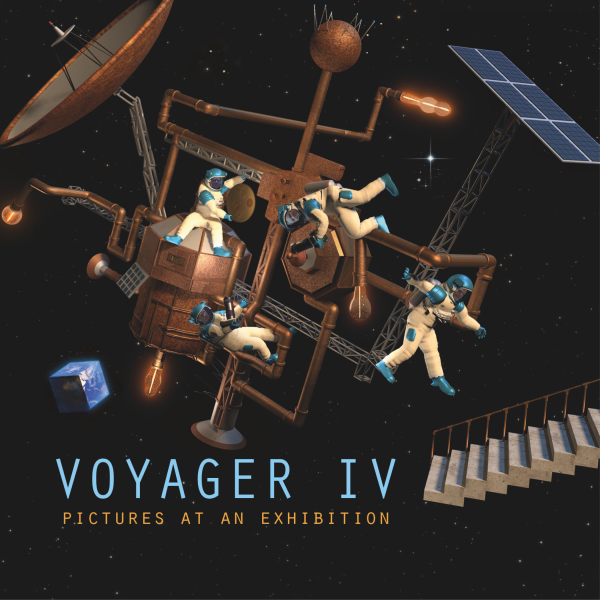