Two albums were released in the late ‘80s that changed metal’s soundscape forever: Celtic Frost’s Into The Pandemonium and Voivod’s Dimension Hatröss. The latter in particular still sounds fresh and futuristic, and it set the tone for the rest of their career. They mixed thrash with progressive elements while drawing on sci-fi themes and while that might sound a lethal combination these Canadian thrashers handled the concoction with aplomb. A career that’s been punctuated by consistently good albums we finally arrive at Voivod’s 15th full length, Synchro Anarchy, and, despite charting new territory for 40 years, finds them forging new ground.

Coming to prominence as part Canada’s “Big Four” (along with Annihilator, Razor and Sacrifice) it was clear that Voivod were going to break out of the pack and not be confined by any genre constraints and that’s just the mindset they bring to Synchro Anarchy. Opening with the impossibly titled ‘Paranormalium’ Voivod arrive armed with a sound heavily loaded with poundage and soon start throwing their weight around. Bouncing from speaker to speaker like a wrecking ball it’s come to demolish your eardrums, but it soon evolves into a dizzying array of time changes; a musical maze that’ll fry your mind with its complexity. Hallucinogenic, ‘Paranormalium’ paints psychedelic pictures with sound and it’s rather like dropping acid in deep space then having a bad trip. Needless to say, it’s not for the faint hearted but, if you like your prog rock mixed with thrash and heavy as hell then Synchro Anarchy is just the album for you.

I’ve often thought of Voivod as the Miles Davis of thrash metal and if that rings true then Synchro Anarchy is the equivalent of Bitches Brew. Voivod’s latest finds them returning to the progressive nature of Nothingface before blasting off into the distant future (while revisiting the Angel Rat opus en route). You have to admire the band’s ability to constantly reinventing themselves while staying true to their core sound, it’s a sound that marries invention with catchiness and tracks such as ‘Planet Eaters’, with its staccato riff, will rattle round your head long after the disc’s stopped spinning. Produced by Francis Perron and Voivod this album benefits from a multi-layered sound that’s best experienced through headphones to appreciate its full fidelity. There’s a lot going on beneath the surface, a whole world to explore and demands your full attention; Synchro Anarchy is not the type of record you put on as background music and it’ll reveal more hidden treasure on successive spins.

Time has been very kind to Denis “Snake” Bélanger’s voice, it’s aged like a fine wine and floats majestically over the thrashy ‘Sleeves Off’ and seems to exist within the chuggy riff of ‘Holographic Thinking’. While guitarist Daniel “Chewy” Mongrain brings his own style to this album his playing could be seen as an extension of original six-stringer Dennis “Piggy” D’Amour; it’s fast and frenetic yet draws neat patterns which hypnotise the listener. The huge pendulum swing that is penultimate track ‘Quest For Nothing’ explores the deepest recesses of my speakers and sets things up nicely for closer ‘Memory Failure’. Featuring some nifty drumming from Michel “Away” Langevin (who often seems to be playing several rhythms at the same time) ‘Memory Failure’ brings all the strands of Synchro Anarchy into one cohesive whole and finds Voivod disorientating the listener in a blizzard of impossible time changes, which is exactly where we came in…

After frying listener’s brains for 40 years Voivod show no signs of slowing down. They’ve barely put a foot wrong throughout their career and Synchro Anarchy is another gem in an impressive discography and long may they reign. 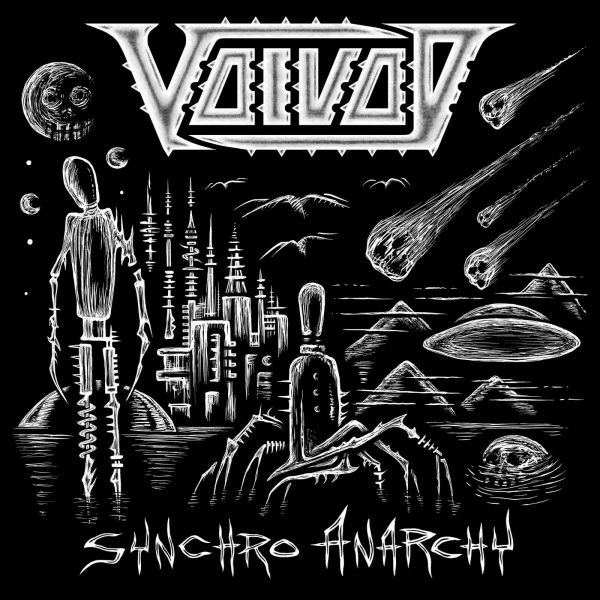