Birthed from the vibrant Bay Area thrash scene in 1985 the aptly titled Vio-Lence led the charge during the second wave of thrash and changed the course of metal with their classic debut album Eternal Nightmare. After two more solid albums the usual inner turmoil found the band disbanding and after a few false starts they’re very much back and with a new EP, Let The World Burn, that can rival their early releases.

Bursting from my speakers like a hydrogen bomb ‘Flesh From Bone’ gets things off to a blistering start and makes it perfectly clear that Vio-Lence are back in the game, and in some style too. This quintet still knows how to thrash and they can still teach today’s young pretenders a thing or two. This is exactly how thrash metal should be played; raw, visceral, full throttle and with a sound that’ll sandblast your skin at 20 paces. It’s the sound of all hell breaking loose and will make you start a circle pit in your living room and have you diving off sofas. Vocalist Sean Killian hasn’t lost the ability to deliver vocal gymnastics and ‘Flesh From Bone’ is the perfect vehicle for his gravelly roar. In short, it’s everything a good thrash track should be and finds the guys honing their energies into a white hot laser beam.

Let The World Burn features three-fifths of the classic Eternal Nightmare line-up (Sean Killian, guitarist Phil Demmel and drummer Perry Strickland) and if that’s not enough to whet your appetite the band is completed by former Overkill guitarist Bobby Gustafson and one time Fear Factory bassist Christian Olde Wolbers. Of course, assembling such a stellar cast is no guarantee of success but a cursory listen to ‘Screaming Always’ will tell you all you need to know. It’s akin to being locked in a room with the most depraved serial killer and being subjected to a sonic assault. The tag team of Bobby and Phil create a complex maze of riffs then trade frenetic solos while the rhythm section lock in tightly to deliver a punishing beat.

The thing I like most about Vio-Lence is that they’re not about all out thrash and ‘Upon Their Cross’ drops down a gear to deliver a mean and moody track that positively smoulders. It makes a fine centrepiece around which the whole EP revolves, and its lower gear means that when an explosive solo erupts mid song (as if from nowhere) it’s like pouring gasoline on a naked flame but it’s foot firmly to the floor as ‘Gato Negro’ races out the blocks and leaves a trail of destruction in its wake. As the Doomsday Clock continues to tick towards that fateful hour and the world teeters on the brink of apocalypse it seems that the title track, ‘Let The World Burn’, has been tailor made for these times. The soundtrack to a world perishing in flames it’s a combustible number that offers little in the way of redemption and makes for an ominous closer.

My only real gripe with Let The World Burn is that at just 25 minutes it’s too darn short. However, Vio-Lence have crammed more into these intense 5 tracks than most bands pack into an entire career and it makes for a triumphant return. Welcome back, guys! 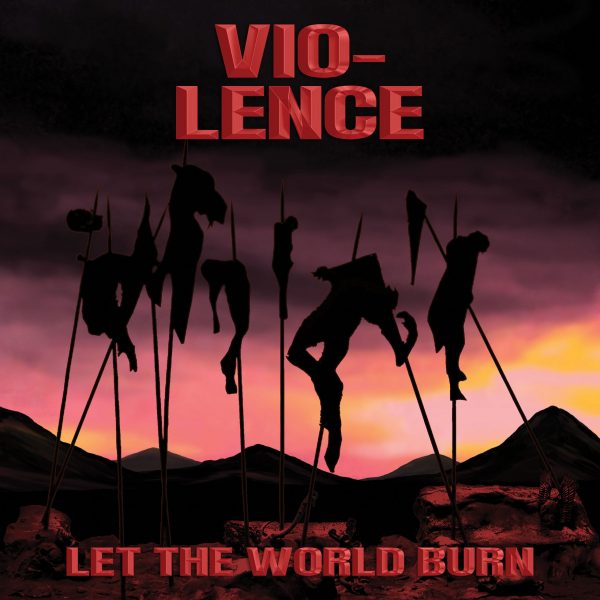