For every punk rock band that first picked up a guitar after listening to the Pistols or The Clash, much the same can be said about Venom and the legions of black metal performers to have followed in their fiery footsteps.

If anyone can lay claim to being the grandees of black metal it’s the trio from the North East of England. As Mayhem’s Necrobutcher memorably put it when paying due respects… “We didn’t know what we were looking for, but when I heard Venom, that was it.”

Any black metal disciple is likely to have at least some of Venom’s vitriol lying amidst their record collection. So much of the material on this repackaged Sons of Satan is likely to be familiar territory to any followers of the extreme metal scene.

Which isn’t to say this very intimate release isn’t without virtue. Quite the opposite in fact. What BMG have done here is to lasso some of their lesser heard moments and bring them together to provide over an hour’s listening time into some of Venom’s ‘Rare and Unreleased’ cuts.

What also allows this album to raise its head above the parapet is that the band’s earliest demos, recorded at Church Hall in Newcastle1979, took place just before original vocalist Clive ‘Jesus Christ’ Archer left the band. Recorded on little more than a bog-standard 1970s high street cassette recorder, there is inevitably an almost primitive sound to the likes of ‘Angel Dust’, ‘Raise the Dead’ and ‘Venom’ – tracks that ultimately went on to become black metal anthems, but captured here as the first flickering embers of what was to become one of extreme metal’s most visionary and vital bands.

While the Church Hall recordings are of their time and clouded in a sonic murky fog, the following 10 numbers are from the 1980 Impulse Studio sessions, and have greater clarity allowing the likes of ‘Sons of Satan’ and the chunky ‘In League with Satan’ to hit home like an arrow. Four songs are doubled up from both sessions

The Impulse recordings also include a few verbal exchanges between the band before they finally hit the pedal, such as on ‘Live Like an Angel’ and ‘Schizo’. It all adds to the unabridged appeal of these recordings, referred to here for self-evident reasons as the ‘£50 sessions’!

A couple of years after these recordings were made, and with Cronos of course now on vocals, Venom were being hailed as kings of a whole new genre after the release of their first two studio albums Welcome to Hell (1981) and Black Metal (1982). While the north east was a hotbed of the NWOBHM scene through the likes of Raven, Fist and White Spirit, Venom’s occultist leanings and distinctive Baphomet logo and imagery saw them accredited with formulating a whole new genre of their own, the name of which was lifted rom their second album.

Venom’s classic line-up of Cronos, Mantas and Abaddon recorded two further studio albums At War with Satan (1984) and Possessed (1985). While inspiring that first wave of black metal bands such as Bathory and Hellhammer, Venom’s influence still resonates today through the likes of Polish titans Behemoth.

Anyone fortunate enough to get their hands on the deluxe Venom boxset In Nomine Satanas last year will already have these previously well-hidden gems. If that doesn’t include you, then here’s your chance to plug that Venom void in your collection as these rare recordings now deservedly receive their own stand-alone release on double-album splatter vinyl, digipak CD and digitally.

The package includes extensive sleeve notes and interviews with Cronos, Mantas and Abaddon by Dom Lawson, plus rare and unseen photos from the band’s early years. 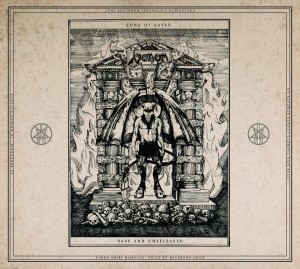