Pigeonhole – never really thought about what one actually is (I guess it’s a, erm, hole for, y’know, pigeons to roost in) and how it relates to the phrase but thank goodness they exist. Kudos to the bands that are hard to pigeonhole – those bands that defy categorisation, that refuse to be lumped in with a genre, a movement. Those bands that march to the beat of their own drum, that wend their way down a path of their own choosing, that follow their own muse.

And here we are at ‘Generator’ – album number three. As well as the usual brilliant musicianship, experimentation and iconaclasm, it sees a further progression – in terms of sound, maturity, professionalism and more, much more.

This being an instrumental album we’ll try not to dwell on individual songs for too long and tackle this as a whole, as an organic single wall of sound which, I expect, is how the band would intend you listen to this. It’s a holistic entity, best experienced in one blissful sitting…preferably in the garden with a glass of vino (or is that just me?).

The fusion of organic instruments and electronic expertise is flawless, creating a single, smooth sound that washes over you. Electronica usually comes first – ambient swirls, mellow keys, lo-fi beats and blips. It’s not jarring at all, it’s chilled – a balm, a salve. There is occasional piano, always perfectly placed in the mix. There’s a smidgeon of chill-hop urban noise too. It’s a chill out room curated by Explosions In The Sky.

But good old fashioned instruments are never far behind. The drums are controlled yet frantic, the guitars create a post-rock wash of sound, building from gentle plucking to lengthy, ecstatic crescendos (ooh err). Constant, subtle changes hold your attention while never distracting from the overall mood. The sound is much more polished than previous albums, the production giving it an almost pop edge. There are definite 80’s retro touches yet it manages to be utterly contemporary, existing entirely in the here and now.

Distortion is occasionally deployed, almost as an instrument itself. The electronic tweaks are thoughtful and unobtrusive, skilfully utilised. Rave sometimes comes to the fore…but in a rock stylee. There is jazz, especially in the drumming – brushes are used in ‘Drop’ (a stand out track) before an almost soft rock vibe takes over for a while. Who knew soft rock and post rock could work together, but they do.

The melodies are effortlessly lovely, drilling their way into your psyche. Dynamics too are on point. Songs swell and fade, even dropping out completely, only to build again. It’s life affirming stuff, resolutely positive and joyous. It’s chilled yet urgent, it swirls around you. Laid back and gently feel-good. The gear changes are knife-through-butter smooth, you don’t feel a thing until you realise you’re flying. Sometimes you’re focussing on the beats, other times the guitars imperceptibly move to the fore – solid, fluid and expressive. Melodies drop in, wave and offer you a cold one before drifting off. It’s smooth…Goldblum smooth.

So, yeah, not an easy album to, erm, pigeon hole. Yes, there’s pop, it’s all wrapped in a calming gossamer sheen but the overall dynamic is post rock. As Vasudeva head into their 30’s they have given us an album that reflects their growing maturity. It’s commercial, accessible and a pleasure to listen to. At times it’s almost background music, but in a good way. Plus, ‘Yamaha’ has a great video and the album’s fourth track is called…III. Give this a try, stay home, stay safe, sit in the sun and enjoy this.

Released on 10 April 2020 by Skeletal Lightning 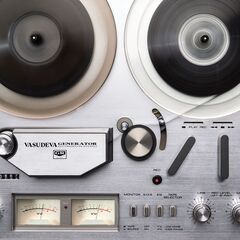