Pub rock. A uniquely seventies thing. The closest we had to a precursor to punk. A catch-all term for a diverse collection of bands who…erm, mostly played in pubs around the London and Essex area. But it was so much more than that. Like Northern Soul, it was pretty much a genre in itself and a way of life at the time. The bands on the circuit at the time were legion. And legendary. And notorious. And often awful.

Thankfully those good people at Cherry Red Records have been good enough to collate all the faces, all the players and losers and also-ran’s into a glorious, comprehensive, 3 Cd collection that saves us having to do all the research and leg work. Plus it has an informative 47 page booklet that tells you everything you need to know about the vibrant scene.

The collection runs in pretty much chronological order through the 70’s and contains more than it’s fair share of suspect fashions and somewhat outdated attitudes about, well, everything. But it also contains some damn good music, so let’s jump in.

Actually, before we do that, a bit of background. The scene was pretty much kickstarted by American band Eggs Over Easy. Bored and at a loose end while recording an album, they convinced the landlord of Kentish Town pub The Tally Ho to let them perform there…reminding him that live music would ensure a boozer full of thirsty punters. And from these tiny seeds a movement was born.

Over the next 4 hours and 70-odd tracks you’ll discover bands you’d never heard of (often with good reason), bands who were just too big for the scene and moved on to bigger venues and greater acclaim, bands who should have been huge but inexplicably weren’t (step forward Roogalator), failed bands with members who went on to (much) greater things, and fascinating backstories aplenty. There are also a few bands who weren’t actually pub rock bands but were shoehorned in because they had that “pub rock state of mind” – eg Quo, Lizzy, Mott The Hoople.

So, CD1 covers the early days. There’s quite a strong 60’s feel about many of the bands. Byrds-y Rickenbacker jangles and twangs of country abound. As does early Stones style R&B. There’s rustic folk, garage soul and reggae. Several of the main players are already present and correct. Brinsley Schwarz are here, as is Ducks Deluxe and Dave Edmunds (who pops up all over the place). Alex Harvey and Jona Lewie are also hovering around, as are Kilburn & The High Roads, featuring one Ian Dury. It was blindingly obvious that he was going to be a star – the sound and lyrics and attitude were already in place, he was ready to fly.

There were also a few interesting band members. Ace featured Paul Carrack on lead vocals and keys while Brewers Droop (whose name and most famous song – ‘I Can See Your Pubic Hair’- told you all you need to know about their maturity levels) features, ever so briefly, a young Geordie lad by the name of Knopfler on guitar. I could be wrong but I seem to remember him going on to better things. And why were National Flag not bigger?

On to CD2. Pub rock’s prime, it’s salad days, it’s purple patch. And to that end we have Dr. Feelgood (da guv’nors), Eddie & The Hot Rods, The 101’ers (featuring a pre-Clash Joe Strummer) and, erm, Chas & Dave. There’s still a lot of country and psyche 60’s pop but there’s an edge beginning to develop, an edge that would blossom into decidedly more punky things.

There’s also other stuff. Fox give us a fairly blatant rewrite of ‘A Horse With No Name’ while Strapps share some seriously dodgy lyrical content with ‘Schoolgirl Funk’. The Count Bishops rip through a rough and ready ‘I Ain’t Got You’ – also being covered by a youthful Aerosmith at the time and Jona Lewie pops up again, this time in Brett Marvin & The Thunderbolts. And lets not forget one of the most jinxed bands in rock, Stray – once notoriously managed by Charlie Kray.

And so to CD3. Punk and New Wave were starting to emerge and seep into the pub rock sound (if there is such a thing). The names were starting to change too. Yes, Dave Edmunds is still around (at least twice). But other names are starting to take prominence. Elvis Costello is now Elvis Costello. Nick Lowe is emerging from the background. Paul Young is fronting Streetband (remember ‘Toast’?). Graham Parker, Chris Rea, Mick Ronson, Chris Spedding and various Weller based faces are now snarling away happily in public houses up and down the land.

As are other well known names. The Pirates peel off some furious rock n roll, guitarist Peter Green (not that Peter Green) was a huge influence on various punk six-stringers. Clover feature a young Huey Lewis on vocals before he discovered the power of love (sorry). On the weirder side of the street we have Billy Bremner (not that Billy Bremner), a dark, twisted take on Chuck Berry’s ‘Come On’ by Ian Gomm and a faithful cover of The Band’s ‘Shape I’m In’ by Meal Ticket, featuring lead vocals by one Rick Jones – who will be better known to anyone of a certain age as that hippy geezer from ‘Fingerbobs’. We end with The Inmates, a R&B band clearly influenced by Dr. Feelgood – the circle is now complete.

This compilation is a no brainer for anyone with even a passing interest in the scene. Chock full of great music, big names, hilarious misfires, colourful characters and a boozer full of nostalgia, it’s the most fun you’ll ever have in a history lesson. Highly recommended. 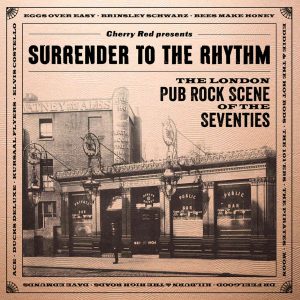