Despite being retrospectively coloured with neon blues and pinks the early ‘80s were a truly harsh time: mass unemployment, poverty, inner city riots and police brutality all conspired to make daily life a struggle. However, such conditions are fertile ground for great art and it was this era that the Punk And Disorderly albums succinctly documented. Featuring the cream from the second wave of punk these three compilations were explosive, incendiary releases and, almost forty years later, still require careful handling.

By 1979 the nihilism of British punk had reached it’s logical conclusion and the scene had fractured. Bands like G.B.H. and Angelic Upstarts rejected the post-punk posturing of Public Image and their ilk and focused more on a grittier, politically charged brand of punk that was more in sync with the geners origins. Christened ‘UK82’ (after The Exploited song) it was a raucous sound that was lean and trimmed of any excess fat, that still reverberates today in genres such as hardcore and street punk. Bristol’s Vice Squad had the honour of opening Punk And Disorderly with ‘Last Rockers’ and set the template for the rest of the album. Full of pounding drums and buzzsaw guitars it encapsulates urban desolation, a post-apocalyptic soundtrack that finds the band emerging from the wastelands and calling the faithful to arms with a raucous sound as their rally cry.

Avoiding any abstract lyricism each song contained here is an eyewitness account from the streets…and it ain’t always pretty. There’s police harassment from Wales’ The Partisans (‘Police Story’), a damning indictment on the state of the nation from Red Alert (‘In Britain’) while New Mills Oi! merchants Blitz stick the boot in on ‘Someone’s Gonna Die’. But if all that sounds a bit serious then perpetual loons Peter And The Test Tube Babies get ‘Banned From The Pubs’. However, the overall feel is of cold war paranoia and nuclear armageddon (an ever present fear in the ‘80s) which Chaos U.K. perfectly captured on ‘4 Minute Warning’. This album disproves the accusation that the scene was reductive and there’s plenty of variety on offer from the punky Bauhaus vibe of UK Decay to the crazy carnival sounds of Dead Kennedys via the military muster of Demob, Punk And Disorderly is a smorgasbord of all that’s good, studded and spiky.

Punk And Disorderly, released in 1982, defined a generation and reached a respectable number 48 on the national chart (particularly impressive at a time when you had to go out and buy a physical copy). This re-issue adds five contemporary tracks as bonus cuts and features the cartoonish (but certainly no joke) Anti-Nowhere League with ‘Let’s Break The Law’ and Discharge who bark a political manifesto over ‘State Violence State Control’. A fine start to the series but, amazingly, better was to come…

Following the first volume by a mere six months Punk And Disorderly – Further Charges hit the streets in September ‘82 and kept the amphetamine buzz burning brightly. In a nice piece of continuity G.B.H. closed the first album and they opened the second with ‘Sick Boy’ which set the bar impossibly high. Along with Discharge they paved the way for American hardcore (and later thrash) and in 1982 ‘Sick Boy’ was far faster, and heavier, than 90% of what passed as metal. With a satisfying bass rumble One Way System come into view with the venomous ‘Stab The Judge’ while The Dark follow with ‘The Masque’ and inhabit the same kind of sonic space as early The Damned in that gothic/punk crossover way. Often touted as the next Clash, America’s Channel 3 prove that UK82 had global reach and deliver the furious ‘I’ve Got A Gun’.

All of the tracks included here were mainstays on the independent chart and were released (or self released) on small labels like Riot City, No Future and Secret and soon became hard to track down (even more so nowadays) which made these albums essential in collating all these key tracks in one collection. The second wave of punk was, by its rudimentary nature and raw aggression, viewed as something of a “boys club”. Well, Further Charges blows that notion out of the water with three choice cuts featuring female vocalists; The Expelled deliver the waking nightmare that is ‘Dreaming’ and Action Pact get righteous on ‘London Bouncers’. Opening the first disc, and closing the second album, Vice Squad do what they do best and unleash the musical bomb that is ‘Resurrection’ and finds their irrepressible singer Beki Bondage in fine fettle.

This disc adds a further five tracks to bolster the running time, making a stellar album even better and includes two exceptional blasts of fury in the shape of the Mau Maus’ ‘Society’s Rejects’ and The Varukers with ‘I Don’t Wanna Be A Victim’. What I like most about compilations such as Further Charges is stumbling across undiscovered gems and such a diamond is Dead Man’s Shadow. ‘Toleration Street’ was their only single for Expulsion Records and, hard yet melodic, encapsulates all that was great about UK82 and makes for the perfect closer.

These three albums remind me of those classic Oi! compilations released around the same time but while they went on for a few albums too many this trio of records terminated at a highpoint, namely Punk And Disorderly III – The Final Solution. While there was a political thread running through the previous releases here it becomes finely honed and sets the ruling elite firmly in its sights. Released in 1983 and at the height of a biting recession The Final Solution is full of proletarian rage and tracks like ‘Give Us A Future’ (by One Way System) and the Newtown Neurotics’ ‘Kick Out The Tories’ are pretty self explanatory. However, for all its undiluted fury and indignation tracks like the Angelic Upstarts’ Woman In Disguise’ are full of melody and along with The Adicts’ ‘Viva La Revolution’ are stone cold terrace anthems that demands 1,000 voices sing along.

As with the other two discs there’s moments of brevity amongst the sloganeering and The Ejected raise a few smiles with ‘Have You Got 10p?’ and The Destructors raise a few eyebrows with ‘Jailbait’. Old school punks U.K. Subs and The Exploited sit easily amongst the new breed with the former detonating an incendiary ‘Police State’ while the latter show the metallic leanings that would define their career on ‘Computers Don’t Blunder’. A frightening report from blood stained streets The Violators with ‘Summer Of ‘81’ made sure The Final Solution, and indeed this series, ended on just the right note. Six tracks are added as bonus cuts and each would sit well on the original album but Riot Squad, with their 50/50 skinhead/punk band mixture, a vocalist who bears an uncanny resemblance The Exploited’s Wattie and a sound like Blitz is the pick of the bunch.

Hopefully the social ills that blighted the early ‘80’s will never be repeated but if something good came from that era then it’s the sound of UK82. 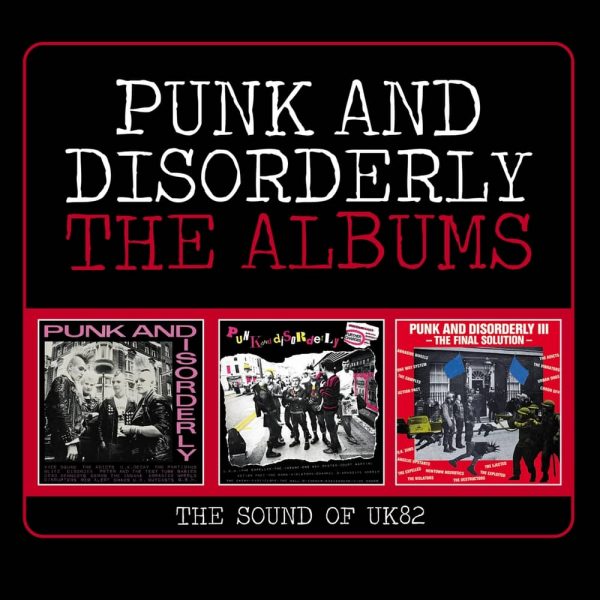