Rockabilly, like no other genre, captured the edgy excitement of youth; with songs about drag racing, fist fights and loose women it was perfect teenage fodder. It’s influence spread far and wide but no more so than with legendary proto-punks The Cramps and Lux And Ivy Dig Insane Rockabilly collects a host of obscure singles that testifies to rockabilly’s lasting influence.

I always thought it was ludicrous when punk and rockabilly clashed in the late ‘70’s; both were energetic forms of music with any excess fat trimmed off and, for each, the 7” was preferred medium. With songs rarely breaking the three minute barrier rockabilly wasn’t hanging about and that’s just the aesthetic into which this collection taps. Case in point being opening track, the aptly titled ‘Blast Off’ by Aiden Holloway. Aimed squarely at the juvenile delinquent, teenage market rockabilly captured the ‘50s zeitgeist and ‘Blast Off’, released as the US were about to colonise space, has a definite sci-fi feel. Cars too featured heavily and Charlie Ryan’s ‘Hot Rod Lincoln’ (a precursor to Cash’s ‘One Piece At A Time’) races out the blocks and comes replete with a host of groovy sound effects.

In another correlation with punk the majority of artists (with a few notable exceptions) on this collection inhabit that grey, obscure area and rarely made waves outside their locality. Of course, that makes this compilation an intriguing listen and means many of these tunes still sound fresh over 60 years later. There’s aura of energy that bursts from these songs and, rather like an electrocuted cat, they demand you shake your tush. From the wonderfully un-PC ‘Whistle Bait’ to the rubber burning ‘Hot Rod Race’ this collection comes from an era when songs actually told tales and each one here is like a mini novella that documents life in small town USA.

Dating back to the fifties rockabilly blended country with rhythm and blues but it’s a pretty broad church that incorporates everything from honky tonk to hillbilly and this disc stops at all points in between. Those expecting some respite as we switch discs are in for a shock as we kick off with a bruiser from Billy Brown, ‘Did We Have A Party’. However, there’s plenty of variety contained within as ‘You Gotta Pay’ is garnished with tinkling keys and is all wrapped up in delicious harmonies. It’s a chrome wheeled, fuel injected, white knuckle ride as Sonny Fisher arrives with all needles in the red for ‘Pink And Black’ and sets things up nicely for Curtis Gordon and ‘Draggin’’

As the title suggests this set is comprised by tracks which inspired by The Cramps who, in turn, birthed the whole psychobilly genre. Tracks like Sonny Cole’s ‘Curfew Cops’ and Jay Cee Hill’s ‘Bump!’ illustrate from where psychobilly lifted its chops, both musically and attitude wise and ‘Bump!’ in particular (the joys of being hit on the head with a frying pan) contains the dark, absurdist humour that’s present in the scene. Just like Lux and Ivy we get the husband and wife team of Larry And Dixie Davis delivering ‘Gotta Live It Up’ before Terry Daly And The Nu-Tones arrive with all the needles in the red for the raucous ‘You Don’t Bug Me’. There’s only one band that could bring such a set to a conclusion and that’s The James Boys who treat us to an amazing ‘Back Rub’.

If you’re a rockabilly obsessive this compilation has enough to plug the gaps in your collection but if you’re new to the genre then there’s no better place to start than with Lux And Ivy Dig Insane Rockabilly. 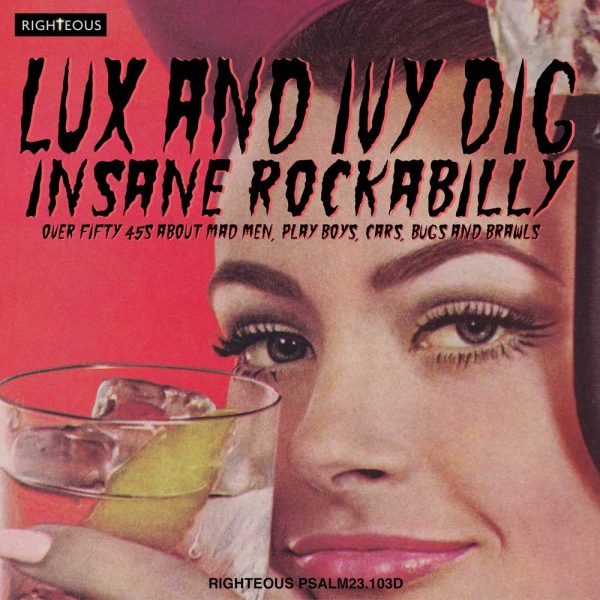