Over the years we’ve become desensitised to heavy music with metal’s bastardised offspring pushing the genre into uncharted territories so it’s hard to fathom just how earth-shaking and groundbreaking the music contained on I’m A Freak Baby 3: A Further Journey Through The British Heavy Psych And Hard Rock Underground Scene (1968-1973) once was. Even after half a century the sounds herein remain hard as hell and this lavish 3 disc set mines some deep cuts for the ultimate genre overview.

As the ‘60s hippy dream turned into a bad acid nightmare London’s Stray provided the perfect soundtrack. Their controversial ‘Suicide’ opens this collection and encapsulates all which was great about that era. Introduced by a glorious wall of feedback theirs was a testosterone fuelled sound driven by a heavy blues beat and juxtaposed with fuzzed up guitars. In many ways they set the standard for the rest of this set and, masculine and punchy, it’s music that will floor even the most hardened music fan. Not afraid to stretch out musically ‘Suicide’ takes the listener on a dark journey that’s driven forward by a sublime bassline and leaves you slightly punch drunk at its conclusion.

An early sighting of U.F.O. finds them delivering ‘Prince Kajuku’ (from their sophomore album U.F.O.2: Flying) which features the wonderfully spaced out guitar of Mick Bolton. We can only speculate where he would have led the band if he wasn’t ousted by Michael Schenker but we can be certain it wouldn’t have been the Top 40. More bands in their embryonic form are the glammed up Mott The Hoople who out-Bowie-Bowie on ‘The Moon Upstairs’, a Mark I Deep Purple who unleash John Lord’s organ on ‘Mandrake Root’ before Scottish terrorists Nazareth get low down and dirty on ‘Fat Man’ all of which provide an intriguing insight into their early days and the vastly differing approaches prove the scene was far from generic.

Guaranteed to blow your tweeters Tear Gas with ‘I’m Glad’ is the stuff rock dreams are made of and if, like me, you’re partial to a bit of cowbell, retro organ and extended guitar solos then this track is definitely for you. The sequencing of this collection is spot on as Creepy John Thomas adds a light touch with ‘This Is My Body’ and Sweet Slag perform ‘Flavour Of Decay’ with a free form jazz sensibility ensuring this disc ebbs and flows like a regular album (and not just a collection of heavy tracks). Original rock agitators The Pink Fairies are a band who should have been massive (maybe their moniker held them back?) and ‘Teenage Rebel’ is the musical equivalent of a street fight that captures the edgier end of the early ‘70s.

Classic Uriah Heep open the second disc with much missed and lamented vocalist David Byron adding his considerable operatic range to ‘Walking In Your Shadow’. In Mick Box Heep had a guitarist who pulled the listener in different directions and he’s often criminally overlooked when people talk great six stringers. Black magic and the occult was a sure fire way to upset authority and was often a lyrical theme in early ‘70s rock and Zior produced a kind of satanic rock that exists somewhere between Black Widow and Sabbath and with its tribal drumming could quite easily accompany a sacrificial suicide. Pushing the needles firmly into the red are the aptly titled Hard Stuff and I’m sure they melted the studio console when they recorded ‘No Witch At All’ (a highlight from their Bulletproof album).

For rock students and musical archivists I’m A Freak Baby 3 is manna from heaven and this second disc (like the first) features artists who would become giants slowly learning their trade. Jimmy Page makes an appearance with The Yardbirds for an early rendition of ‘Dazed And Confused’ and gets experimental with a cello bow and wah-wah pedal. Recorded live for French TV it’s an intriguing piece of musical history but it needs a Robert Plant to bring it to life. Likewise, Sam Gopal featured a young Ian Fraser Kilmister on vocals and guitar and they rock out on ‘Midsummer Night’s Dream’ and Lemmy’s voice is developing his trademark growl. Soon to be poached by Deep Purple both Ian Gillan and Roger Glover performed with Episode Six who took things off the scale with ‘Mozart Verses The Rest’.

It can’t be over emphasised how revolutionary much of this music was, sonically and lyrically, and Third World War marry them both on ‘Hammersmith Guerrilla’. It’s a subversive track that could give Hawkwind’s ‘Urban Guerrilla’ a run for its money (Third World War were censored by their own record label while Hawkwind were barred by the Beeb). On a disc that will melt your speakers Trapeze add a touch of light and shade and ‘Medusa’ intersperses heavy passages with acoustic guitars, each acting as a foil for the other, and the result is a song that sails like a boat on a stormy sea and brings the disc to a suitably choppy conclusion.

Blues purists Free kick the third disc into life with ‘I’m A Mover’ (later to be cover by Maiden on the flip of their ‘Bring Your Daughter…’ single). There’s so much to love here from Kossoff’s sublime guitar tone to the pounding rhythm section via Rodgers’ silky vocals and only Bournemouth’s Bram Stoker could follow by taking a more free form route whilst mixing up unorthodox time signatures. Welsh wizards Budgie show great promise which came to fruition as the decade progressed and they were perhaps the epitome of the power trio with ‘Homicidal Suicidal’ sounding absolutely massive. Another trio raising hell are Thin Lizzy with ‘Return Of The Farmer’s Son’ which, played with military muster, signposted the monster they’d later become.

The music contained on I’m A Freak Baby was real rebel music; the mainstream press loved to hate the bands who unleashed this unholy rumble and subsequently acts like Bone never got so far as recording a single or cutting a demo at some back street studio. And for many of these groups success wasn’t even a consideration and that injects an inherent honesty which jumps from every groove. We should at least be grateful that Bone left behind the hypnotic ‘Crush’ and can only guess at what they could have achieved had they a major record label to fight their corner.

Geordie (featuring a pre-AC/DC Brian Johnson) and their brand of good time rock got, rather unfairly, thrown in with the glam movement but in truth they were about so much more and on listening to ‘Keep On Rockin’’ it’s obvious why the Young brothers poached Brian to replace Bon. Other highlights on the third disc include Leaf Hound who could quite easily swing with Sabbath (and an original copy of ‘71s Leaf Hound exchanges hands for princely sums), Warhorse’s ‘Ritual’ (with a post-Purple Nick Simpler) and Bullfrog delivering a stomping live version of ‘The Joker’. Closing this set are Spooky Tooth with ‘Evil Woman’. It was a track that, by ‘69, had been covered by a multitude of artists including Canned Heat and The Troggs but the Tooth’s extended Blue Cheer styled cover is perhaps the definitive and you can hear a lot of Spooky Tooth in Tony Iommi’s playing, which is surely the greatest compliment.

Containing everything from heavy psych to stoner and proto-doom to hard rock the sounds on this collection set the template for what would become known as heavy metal. As poet Gil Scott-Heron once stated: “The revolution will not be televised” but, thankfully, it’s been documented on this 3 CD set. 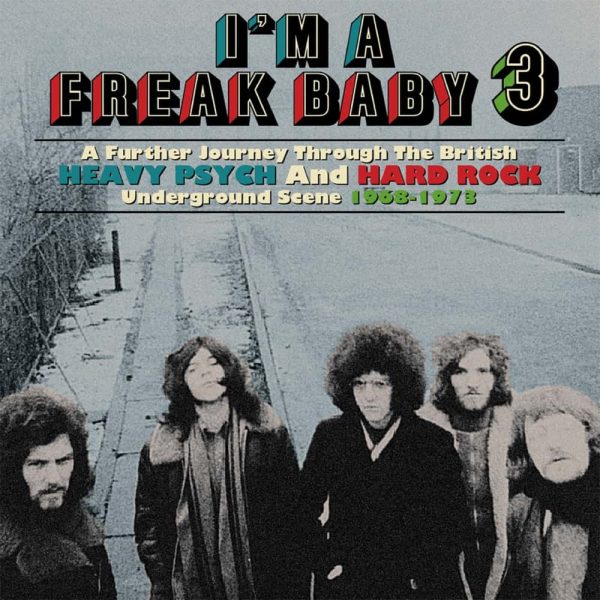