‘Vambo’ is the debut, self-titled album by…well, Vambo. Vambo are a 4 piece who specialise in re-tooled good old hard rock music…defiantly retro but with a definite contemporary kick in the pants!

This was (and, I suspect, will be by you) listened to with a fresh pair of ears, not knowing what to expect and unburdened by preconceptions…the best way to listen to any album. And what an unexpected treat it is – a trip back in time to a golden…well, neon, age.

‘Now You See Me’ wastes no time in setting the agenda. A glammy, vaguely funky riff (with a greasy side order of sleaze) places us firmly in the 80’s and, for a band so young, they absolutely nail this sound. It goes into a cool little breakdown before upping the sleaze ante considerably with ‘Why Why Why’ and it’s hints of The Darkness – although minus a great deal of the arch campery. Vambo are playing it relatively straight. The only criticism so far is that it might just be a tad too precise. A dash more fuck-you youthful abandon is called for here.

‘Cry Woman’ raises things a notch and sounds, for all the world, like a long lost early Foreigner classic. Another frequent touchstone are Queen – there are a great deal of very effective multiple dubbed harmony vocals and early 80’s audio FX, although Vambo never forget to add an extra dose of grit and gristle.

‘Dancing With The Devil’, from it’s title on down, is none more 80’s – it’s a power ballad masterclass, just crying out for a neon and dry ice, supermodels on sports cars video! All the (massively enjoyable) clichés are present and correct.

And things just keep getting better. The fuck-you youthful abandon has turned up to the party…in spades. Several songs are pure Deep Purple – beautifully done and rocking in their own right, capturing that cusp between the late 70’s and early 80’s – where 3 day working week grit and gloom morphed into technicolour ambition and bad fashion choices.

We have the gloriously cheesy ‘Running In Circles’, it’s thunderous drum moments and early 80’s synths calling to mind the keyboard-heavy best of Magnum, Priest and Europe while ‘Vambo Roolz’ recalls any number of bands who couldn’t spell and looked vaguely uncomfortable in make-up (Slade, Sleeze Beez, Twisted Sister). But make no mistake, beneath the 80’s veneer these are great songs.

We finish with ‘Fast Car’ containing, as it does, car engine guitar effects, Hammond organ and all the political/sexual enlightenment of late 70’s David Coverdale – engines throb and falsetto’s scale the Olympian heights of excess. Brilliant.

This is a perfect weekend album – huge fun and utterly devoid of anything approaching brain cells or morals (or is it?). It harks back to a golden age of discovery while rocking like a bastard in it’s own right. You can’t help but like these guys and with a dash more sparkle and devil-may-care theatrics, it could have been a classic. Roll on album number two, the smart money is on it being something very big indeed (ooh-err).

Released on 25 October 2019 by Goliath Records 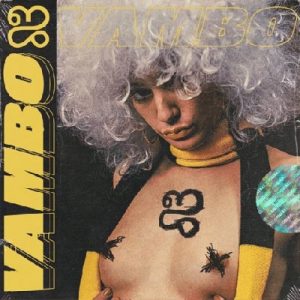