Paul ‘bring on the party poppers’ Castles warms up for the New Year festivities by listening to UR’s debut EP, Hail Death, released via Arachnophobia Records  on 15 December, 2016.

UR – So is that err? Maybe Urrrrghhh? Or just plain U-R. Either way the musical content is much more interesting than the name of these Polish newcomers. Introducing themselves with Hail Death, this is a five-track debut EP full of blackened bites, fiery intent and belligerent blasting.

Band members have links to Bloodthirst and Bloodstained but UR appears to be a raw beast all of its own making. Frontman Gregor slightly underplays things by suggesting the crew just rock up, drink and start playing. The music is much more substantial than that however. Despite the raw edge, the merits of Hail Death are many and should in no way be sold short.

‘A Dying Star’ has a great riff to open things up with but when the vocals arrive they’re not quite what is anticipated. Instead of the screeched savagery of your standard black metal, there’s some spoken verse that has an impressively haunting feel to it. The beat is steady, the drums just acting as a buffer to the more cutting guitar while Gregor’s vocals do eventually take on a more desperate urgency.

That’s certainly the case too on the raging ‘Tongue of Fire’ which speeds along at a satisfying lick of knots over which the barbed wire vocals seemingly threaten to cut any dissenters to ribbons.

Even more rabid is ‘Let the Darkness Comes,’ a satanic swathe of blastbeats tumbling down with intent, a great hook to hang your bulletbelt on and Gregor in fist-pumping mood with a massive choral chant and a venomous final cry  to ‘Hail Death!’

A semblance of calm marks the start of ‘Total Inertia’ but again the guitars interlock with authority clearing the way ahead before Gregor announces himself which he does surprisingly with some great sweeping clean singing that somehow works very effectively alongside his more demonic thrusts.

UR are off to a great start and hopefully by the time they come around again we’ll know how to pronounce their name! 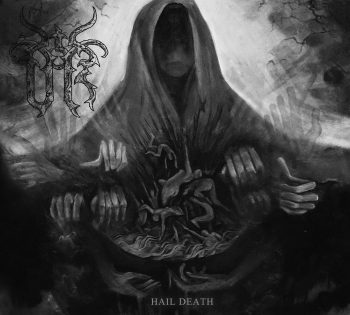