Get those anvils and daggers held high!

Long before hirsute man mountains Amon Amarth started adorning their stage with enormous fire breathing dragons, fellow Swedes Unleashed had already raised a drinking horn or two in recognition of their Viking forefathers. Unleashed has been a bloodcurdling source of Scandinavian death metal smothered under a medieval cloak of Viking veracity for more than a quarter of a century. And as their powerful new album Dawn of the Nine makes clear, there’s still sufficient surges of adrenalin racing through their veins to floor Big Foot.

Unleashed’s roots can be traced back to Nihilist. From the embers that burned briefly but brightly through Nihilist in the late ‘80s two new Scandinavian warriors emerged, Entombed and Unleashed. The latter was led by bassist and singer Johnny Hedlund, the sole surviving original member playing on this latest full length release, the band’s twelfth. Right from their debut delivery Where No Life Dwells (1991) Unleashed have been an integral part of the extreme Swedish scene. How they measure up to Entombed is for others to decide but what is beyond question is Unleashed’s longevity and impact that ensures their name is among the most revered of the genre while their credibility has always remained solidly intact.

The trailblazers of legends and longboats complete something of a journey here as Dawn of the Nine is essentially the piece that slots neatly into their previous 2012 offering Odalheim. Without getting completely immersed in the dungeons and dragons world of Norse mythology, and happy to stand aside to those who do, the two albums capture the legend of Ragnarök, said to be the great battle at the end of the world. So prepare to venture onto the battlefield once more, one populated by the mythical warriors and warlords of Midgard from the bleak and barren lands of the Norsemen.

Opening number to this soundtrack of fights and fables is suitably titled ‘A New Day Will Rise’ which although heavy enough is probably not the best track here. Unleashed really raise the flag on ‘They Came to Die’ and the goblins and goblets anthem ‘Defenders of Midgard’. By the time they reach ‘Where is your God Now?’ the gloves are truly off and Unleashed absolutely make merry hell as they lay down bludgeoning riffs as Johnny growls the title over the top.

Unleashed have always been able to tie down a death metal riff and pin it there until it’s eyes pop. Dawn of the Nine rates up there with As Yggdrasil Trembles (2010) as among the best of their dirty dozen. While sticking to the template the quartet with a quarter of a century’s experience are now consummate performers and fireball tracks such as ‘Let the Hammer Fly’ will never let you down.

In contrast to most death metal you listen to, Hedlund’s gravelly barks are actually fairly easy to decipher and as the band are telling a story of sorts here, this is no bad thing. In fact the chants built into the chorus are sure to be yelled back in force when they start performing the new material live. ‘Land Of The Thousand Lakes’ is a steadier number that begins with a thudding bass so low and cavernous that it can almost untie your shoelaces.

Interestingly, quite possibly the best song is the title track, a much slower than usual piece, which almost bristles with a doomy negativity whilst carrying bucketloads of menace. Unleashed’s Viking heritage never strays far from their core and so it’s no surprise that the curtain closes with the storming ‘Welcome The Son of Thor!’ Get those anvils and daggers held high! 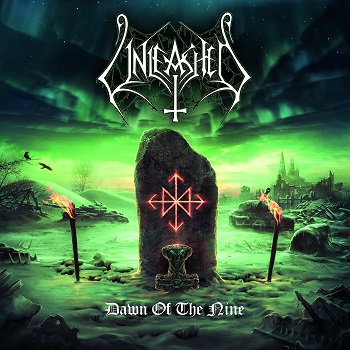