A combination of an early start time and a Monday night combined to make for a Spartan crowd to mark the return to the Asylum of New Zealand brutalists Ulcerate. When the unfortunate Ageless Oblivion took to the stage at a time when the 6 O’Clock news had not even been completed, the paltry number at the Birmingham venue was so pitiful that they deserve praise for even plugging their instruments in.

Regrettably I can’t tell you what they were like as I was otherwise engaged backstage on a prior arrangement to interview Seattle doom duo Bell Witch. Their second album, The Phantom, is one of the year’s standout albums with its measured and monolithic take on crushing funereal doom. The two-man ensemble are made up of Dylan on bass and the newly appointed Jesse on drums, the latter replacing the recently departed sticksman Adrian who worked on the aforementioned album. Truth be told, that thanks to the thick fog of mist on stage the drummer was more or less out of visual range, so it could have been Jeremy Corbyn up there hammering away in his vest, were it not for the fact that I’d caught up with Jesse earlier in the evening.

Fortunately Bell Witch fans, of which there are a growing number, have not seen any deterioration in the band’s pounding rhythms. So the focus is literally on Dylan and his bass that throws down a series of low slung grooves. Both men share vocals with Dylan guiding us through the melancholic harmonies leaving Jesse to enter the fray with his deathly growls.

The Phantom is essentially made up of four tracks, two of which come in at just over 22 minutes apiece. We are talking serious funereal doom here. One deadening vibration slowly makes contact with another, Jesse shakes the cobwebs from the Asylum rafters with a couple of earth shattering rockets, and the whole distorted drone casts a miserable shadow of despair across the floor.

Dylan’s vocals almost act as an additional instrument, more tones and shapes, than actual words. Each of the four tracks on The Phantom, captures the agony of some cruel and agonising deaths. Think immolation in one hand and say garrotted in another.

The band’s second song started with all the urgency of an over 65s Crown Green bowls tournament before one of Jesse’s explosive interventions shattered the stillness, the void filled by intemperate howls of raging distortion. As well as deftly executing his brutal blasts from behind his drumkit, Jesse also barks out his inhuman cries, as though coming from the bowels of hell. The placing of his mic just an inch or two too high means he has to perennially crane and stretch his sinewed larynx to get his vicious verbal vitriol heard. The final piece bears more than a passing comparison to Arkansas doom kings Pallbearer, a great spiralling arc of rainbow rhythms finally bringing some blessed relief after the unforgiving death march.

If in many ways Bell Witch were the lull before the storm then Ulcerate was the full-on twister. Turning this way and then that, often it seems at inexplicably the same time, this New Zealand wrecking crew were in the mood to decimate everything within range. Bald-headed dynamo Paul Kelland is a pneumatic frontman blasting out a diatribe of hatred from under the band’s customary shallow red light.

‘Await Rescission’ from latest album Vermis is the opening shot in what develops into a war of attrition in which Ulcerate are determined to be the last men standing. The Kiwis last played the Asylum around three years ago – with Svart Crown – but tonight the advances made were unmistakeable. More power. More anger. All caught up in a torrid riff and percussion wall of violence.

You would need the intellectual powers of a Physics PHD student to unravel the industrial flavoured tech death metal grooves chiselled into the air by Ulcerate. Kelland has both the physical look and something of the traits of Meshuggah’s Jens Kidman, a formidably forceful frontman. Under the same red glow, Ulcerate powered through a whirlwind of interlocking songs such as ‘Soullessness Embraced’ and ‘Weight Of Emptiness’, the song titles perfectly reflecting the vacant desperation of their content.

‘The Imperious Weak’ saw the red make way for the white, which was appropriate because this song was another white-knuckle blast with more jagged edges than a butcher’s knife draw. The only hitch was a late unfortunate guitar problem for Kelland which possibly curtailed the set slightly, ‘Everything Is Fire’ being an uncomfortably oppressive closer.

If you thought the toughest guys in the UK at present were the Kiwi rugby team think again. 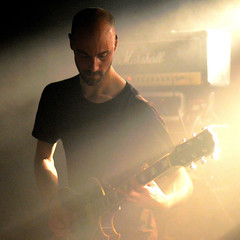 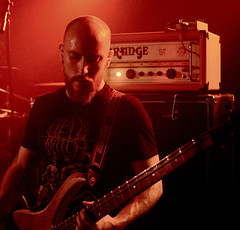 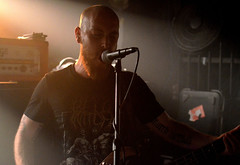 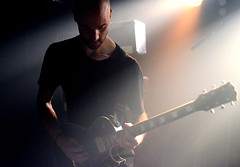 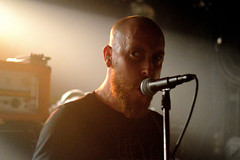 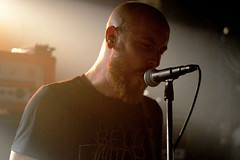 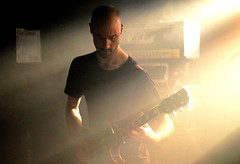 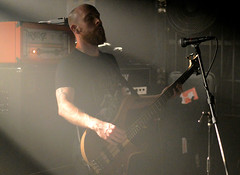 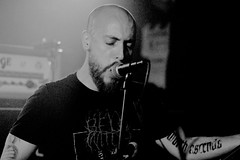 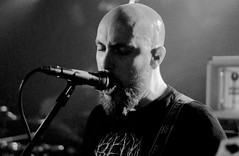 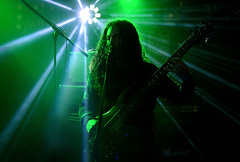