Not for the weak of heart…

Despite having released nothing but an EP and a full-length, Tyranny were always considered one of the titans of the genre back in the heyday of Funeral Doom. Pretty far from being pioneers and innovators like their countrymen Skepticism and Thergothon, these two Finns (who also proved their worth in Wormphlegm) left a lasting impression on the genre nonetheless. On their debut Tides of Awakening, they simply kicked the heaviness, slowness, and mournful atmospherics of the style to the next level creating a black monolith that many would imitate, but none would come close. Following the release of the album, the band went into a long hibernation, first reawakening for some live appearances, and now the time has come to unleash their second offering. “That is not dead, which can eternal lie”, as good old Ech-Pi-El said.

Fifteen minutes into Aeons in Tectonic Interment, one can say that the album can easily pass as Tides of Awakening Pt.II. Tyranny utilizes the same techniques that made the debut great: monolithic songs composed of magma-drenched vocals resounding from the depths of the Earth, crushing percussion with riffs that roll on with the speed and strength of the titular geographic process. The atmosphere is suffocating and dark as ever, with the usual thinly-veiled Lovecraftian subject matter. However, in the album’s strengths also lie its biggest weaknesses: the lack of real variation and over-similarity to its predecessor. Okay, Funeral Doom isn’t the sub-genre with the most stylistic wiggle room, but there are bands who had made varied and interesting music still rooted within the constraints of the style (the afore-mentioned Skepticism and the criminally underrated Asunder come to mind). Due to this and the record’s length, Aeons in Tectonic Interment is not for the weak of heart nor for casual fans of the genre. No standout can tracks can be highlighted, as the nature of the music pretty much makes it pointless.

Overall Tyranny’s second effort, while having all hallmarks of good Funeral Doom Metal, holds limited appeal to those not devoted to the style. If your Lovecraft-omnibus is all dog-eared at “The Call of Cthulhu” and you yearn for the good old days of the mid ’00s when you couldn’t throw a rock in the underground without hitting a band taking it slow and trafficking with Old Ones, this is the record for you. 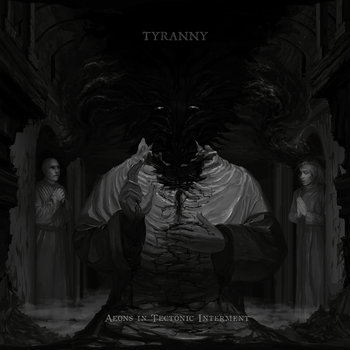