Still firmly embedded in the NWOBHM subculture of the late seventies.

Fans of Whitley Bay’s finest, and all round aficionados of the heavy metal movement will know that this is not a live album. Frequent flyers to Glasgow’s premier live music venue (The Cathouse) need not worry they missed that gig. No, this is a reissue of the band’s 2003 studio album (plus 3 bonus tracks) which, due to label shortcomings, was not widely available at the time.

Considering its time of recording, the album is filled to the brim with surprisingly unadulterated heavy metal, its roots still firmly embedded in the NWOBHM subculture that sprung to life in the late seventies. Doesn’t make them bad people of course. There’s an honesty to this material – produced by Chris Tsangarides – that is infinitely preferable to the sneering, condescending undertone that runs through the so called post rock irony of a few contemporary AOR bands.

‘Highspeed Highway Superman’ and ‘Running Man’ see the machine ramped up to reach an hypnotic momentum. These tracks and others – ‘Three In A Bed’ for instance – just hum with kinetic energy. ‘Bad Bad Kitty’ and ‘Godspeak’ are opposite sides of the same coin. One seems to pursue the glam, stack heeled direction of travel, while the other’s funereal call and response vocals display the band’s ability to wed a muscular brand of heavy metal to their earlier, darker inclinations.

Darker still, ‘Cybernation’ and ‘The Spirit Never Dies’ are just the warm up for the epic, 3 act, 9 minute ‘Master Of Illusion’, a stately, majestic exploration of the genre, teasing us with an unconsummated dalliance with Progressive rock. There are echoes here of one of the bonus tracks, ‘Slave to Freedom’, originally from the 1980 debut, Wildcat, whose prescient time changes were something of a clue to the musical temptations that almost turned their heads, at the beginning of their recording career.

Of the other 2 bonus tracks, one is a new, streamlined mix of ‘Highspeed Highway Superman’, and the other a cleverly arranged rework of ‘Don’t Touch Me There’, a track that also originally appeared on the band’s debut album. All 3 bonus tracks were re-recorded in 2004, planned as album extras for the Japanese market.

There are some brief but informative liner notes here, delineating the band’s 35 year history, including an interview with founder Robb Weir, and a few fascinating (and evocative) photos. 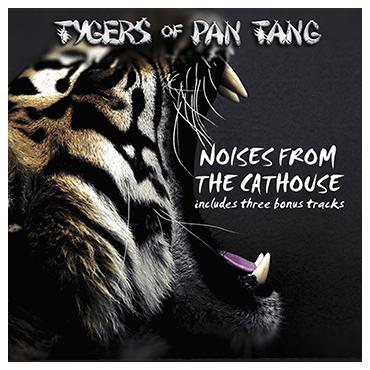