The first time this reviewer came across the Tygers Of Pan Tang was when he found a copy of the bands debut single ‘Don’t Touch Me There’ with it’s striking tiger image sleeve in the out of charts single box on the counter of Our Price Records in 1979. The single was followed by the Wild Cat album but shortly after the debuts release vocalist Jess Cox exited and the band found themselves in search of a suitable replacement. The man for the job was one Jon Deverill who looked every part the rock frontman with his tall stature and flowing locks that he turned out to be. At the same time the band wisely decided to take on a second guitar player in the shape of the unknown at the time John Sykes who later went on to join and have huge success both Whitesnake, Thin Lizzy and his own Blue Murder. With the new line up in place the band hit their purple patch recording three albums (Spellbound, Crazy Nights and The Cage) which would see them become contenders for the NWOBHM crown alongside the likes of Def Leppard, Diamond Head and Iron Maiden. However when MCA refused to back their bid to conquer the US the band imploded. For me that was the end of the Tygers until original guitarist Bob Weir reformed the band in 1999 and in 2001 released the Mystical album with a new line up which continues to perform and release new material up until the present day.

What I wasn’t aware of is that the Tygers Of Pan Tang had in fact risen once before in 1985 when Jon Deverill had joined forces with founder drummer Brian ‘Big’ Dick plus Steve Lamb (guitar), Neil Shepherd (guitar) and David Donaldson (bass) to record The Wreck-Age album in 1985 and two years later it’s follow up Burning In The Shade. This latest release from Cherry Red Records brings together those two albums along with a third disc of Demos from the two corresponding recording sessions.

First up The Wreck-Age finds the band taking on a more AOR approach with their eyes still set firmly on the American market. This is blatantly obvious in the Styx style opening to the first track ‘Waiting’, before the track bursts into life with Deverill still sounding every bit the rock star and Shepherd and Lamb proving that they can supply those classic rock licks which were the trademark of the Sykes era band. Unfortunately this and title track ‘The Wreck-Age’ are as good as the self penned content found here gets and despite Steve ‘Paris By Night’ Thompson’s involvement on seven of the albums ten tracks the only other tracks of this bunch which stand out above the standard soft rock are ‘Ready To Run’ with its chugging guitar rhythm, pounding drum runs and “Run Away” arena chorus and the racing ‘All Change Faces’. The other Deverill/Thompson are really fairly average middle of the road ditties. Not bad but definitely not the Tygers finest moments. It is only when the band hand over the pen to Lorna Wright for ‘Innocent Eyes’ and ‘Women In Cages’ that they show that this could have been a genuine follow up to The Cage.

1986 saw original members Bob Weir and Jess Cox attempting to put together a new line up known as Tyger Tyger and the release through Neat Records of a compilation album First Kill featuring the earlier Jess Cox fronted incarnation of the band a move which caused friction between the two active versions of the band. Tyger Tyger never developed into anything significant and in 1987 the Deverill line up returned with new music. With extra road miles under their belt including time in the US the band (minus Shepherd and Donaldson) found themselves back in the studio to record follow up to The Wreck-Age.

Burning In The Shade proclaims its US influences from the out set with the vocal harmonies of ‘The First (The Only One)’ and ‘Hit It’ taking the choruses into Journey territory as the Deverill/Thompson writing team find their sweet spot (with help from Steve Lamb). Steve Thompson’s influence is much greater on Burning In The Shade as he provides both keyboards and bass which adds to the consistency of the recording. Those keyboards play a huge part especially on the tracks ‘Dream Ticket’ which is your classic 80’s power ballad and the pop rock of ‘Sweet Lies’. However, on ‘Maria’ the band take things a little to far on an overblown non-epic that almost kills the flow and would have had a few listeners of the original vinyl wondering if they should flip the disc. They quickly recover and pull it back with the big (but not over the top) vocals on ‘Hideaway’ before returning to more familiar Tygers Of Pan Tang fare for ‘Open To Seduction’, ‘The Circle Of The Dance’, personal favourite ‘Are You There’ and closing ballad ‘The Memory Fades’. Although this was a much more solid effort it failed to catch the ears of reviewers who found the more radio friendly sound at odds with the bands NWOBHM heritage and this saw the band close another chapter.

This set sees a third disc of demos added to mix (imaginatively titled Demos). All tracks are taken from the original sessions for the two mid eighties releases. Despite the demo version of ‘Forgive And Forget’ coming in like a Gary Glitter reject The Wreckage out takes have the most to offer for the completist with seven tracks which didn’t feature on the final album showing that Deverill had been busy during his hiatus. Although a little rough at the edges early versions of songs like ‘Not Guilty’, ‘Shadow Of The Past’ and ‘Your On Your Own’ show much potential and could have been of benefit to the inconsistency of The Wreckage final track list if worked up to finished songs. You must however remember that this is a collection of rejects and ‘Undercurrent’, ‘Time To Regret’ and ‘Don’t Think I Could Leave’ probably should have stayed in the archive.

There still seems to have been plenty of activity on the Tygers Of Pan Tang front in recent years with Deverill releasing the much anticipated Square One album with former Tygers guitar man Fred Purser in 2018. Jess Cox can also be spotted fronting his Jess Cox’s Tygers Of Pan Tang from time to time as well as the current official Bob Weir led band who had their A New Heartbeat EP released on 18th March this year and headed out on tour from 21st May across the UK and beyond. Maybe now is a good time to reappraise the bands place in the history of British rock music and get back on board.

4.Desert Of No Love

8. The Circle Of The Dance

8. The Face Of Innocence

9. Shadow Of The Past

10. Waiting Burning In the Shade Demos

12. The Circle Of The Dance 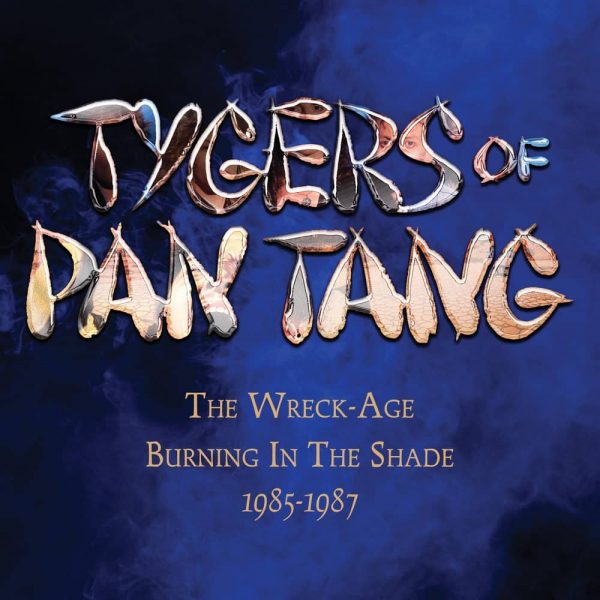