Temple of Artifice is the debut album from Manchester based Twisted Illusion, although the band were originally formed in 2014 and, according to the pre-release publicity, writing originally began in 2016. Since then the band have obviously gone through a burst of creativity, as Temple of Artifice is merely the first of four albums to be released over the next eighteen months, the debut will be followed by the Excite The Light trilogy, three separate but linked albums. Full credit to them for ambition and creativity, at least.

Turning to the debut for now, Temple of Artifice isn’t the longest of albums, about 36 minutes worth, and just seven songs, including the two parts of ‘Imitate Me’ that open and close the album. The press release for this album refers to Twisted Illusion as ‘rising Brit Prog Rockers’, which could be misleading for some, especially as the album opener starts at full throttle, and the listener is far more likely to be thinking ‘power metal’ and ‘NWOBHM’ than any other genre. However, the progressive elements come later in the song with an abrupt change of mood and pace before the brakes come off again. ‘Freedom to Fail’ is a slower song, with the vocals being split, and the prog elements coming more to the fore than on the opener, with the keyboards being more noticeable as well. Again, the song moves through different moods, and there’s a touch of the epic in this one, especially in the instrumental break.

‘Hatred is a Virtue’ is definitely an evocative song title, and the whole song is appropriately faster and more aggressive, but on the equally intriguingly titled ‘Apocalypse – #LOL’ the proggier elements are back with an acoustic intro, before the song kicks into the right gear. The riff is a little reminiscent of Threshold, which is never a bad thing, but while the lyrics are generally about social media and people living their lives on their phones, which is quite a common theme, what is unusual is that the lyrics for this were apparently made up on the spot. Again, this band are not shy of experimentation.

‘Online and In Line’ has a similar lyrical theme, one line being ‘Morons are everywhere’, but compared to the rest of the album, this track isn’t quite as impressive as some of the others, it feels a little cut short, for example you might hope the fluid bass line at the end would lead to a suitable epic guitar solo, but instead it goes into a short, almost sing-along section, which seems a little out of place. ‘A Moment of Lucidity’, though, is almost a ballad, with a gentle acoustic opening, but this is a track that doesn’t stand still for long, moving from the acoustic part to the rockier section, then to the big chorus and finally the guitar solo, in quick succession. There’s a lot of music in just over four minutes, which is typical of Twisted Illusion, sometimes you might wish for the band to dwell on an idea or a theme, to develop it and take it further, but instead it seems the ideas just keep bursting out of the band, falling over each other to be laid down.

Once their debut has had time to be digested, it will be fascinating to see where this band go from here. There’s a lot about them that suggests they won’t stand still for very long, but for now this is an impressive and intriguing debut. 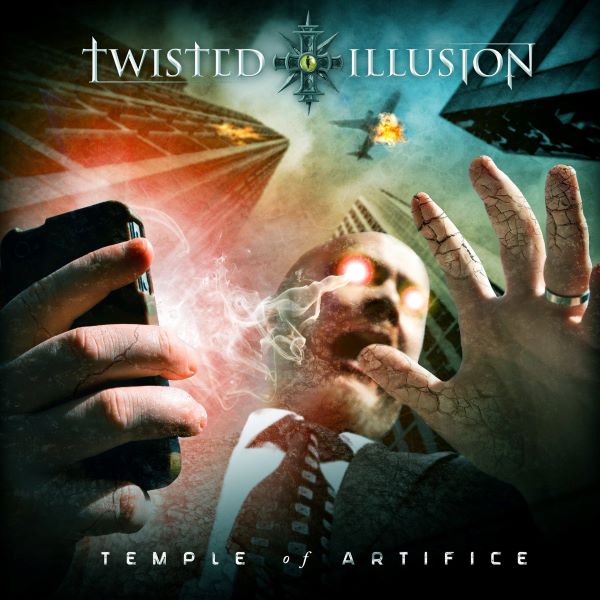