Looking like a cross between Marvel Comics’ The Ringo Kid and Conan The Barbarian with added beard, but betraying a background more in keeping with some Kirby cosmic saga, the self-delineated cover to British slide guitarist Troy Redfern’s forthcoming album, …The Fire Cosmic, not only demonstrates his penchant for what the French call “the ninth art” but his age – Otherwise we’d be looking at some Disney acquisition computer generated piece.

So far, so retro. I recall walking into The Robin 2 (back in the good old days that we hope are coming back) and raising an eyebrow at a support act that resembled The Mission playing cyberpunk ZZ Top tunes. Suitably impressed, sauntering over to the merchandise desk I found out it was Mr Redfern’s band.

For this here …The Fire Cosmic (the ellipses, another comic book touch), he’s enlisted a rhythm section of Dave Marks from the Hans Zimmer Band, and Darby Todd, whose diverse credits include The Darkness and guitarists Robben Ford, Martin Barre, Paul Gilbert. From the start, let’s just say the pair kick up a hefty noise. There’s also a guest appearance from guitarist Ron ‘Bumblefoot’ Thal (Guns ‘N Roses, Asia, Sons of Apollo) about half way through the album, that establishes some classic rock routes having been recorded at the legendary Rockﬁeld Studios in Wales.

With weird feedback evoking the opening soundtrack to some early sci-fi b-movie, I’m not surprised when a beefy 50s style surf guitar dances up and down all over a Texas blues tequila-belching shuffle on opening number ‘Scorpio’. Redfern warns how “the table has turned” with the protagonist seemingly someone running from the mob, driving down into Mexico, and with references to the devil’s eye we move from 70’s spy thriller movies (as intimated in the title) into From Dusk Till Dawn style horror. The rather noisy racket bashing out that’s been proceeding for about three minutes now has a lead guitar screaming fiercely over the top, before slowing down to the audio equivalent of a car chase. In another dimension this could be Motörhead playing The Cramps.

More odd guitar sounds greet us with first single ‘Waiting For Your Love’ where it comes across as the equivalent of a shovel grazing something hard and unexpected in the soil, and they’re either burying a body from the last song, or something undead is about to rise. There’s a stomping, slippery slide guitar shimmering ZZ Top bopping feel. Mid-tempo, heavy on the blues, ‘One Way Ticket’ breaks into a hook line chorus with melody that could have come straight out of the mouths of Steven Tyler and David Johansen on a night out together. Slowing things down further, drums hitting hard, guitars chugging with a night-time dirty funk groove, ‘Love And War’ goes large again on its sing-along chorus, Redfern wryly choosing to solo in a tortured emotional manner that emphasises the “Love” part of this song.

Moving back up the gear changes, guitars cruising with purpose, through a series of time changes we have ‘On Fire’, guest featuring the aforementioned Bumblefoot, whose contributions we possibly feel most during the intro and first solo (but I could be wrong). ‘Lay That Love Down’ brims anthemically, chords chopping, slide at turns bright and cheeky, rhythm syncopating; the overall effect being Little Feat sired English offspring who got waylaid into Britpop but now make a prodigal return. ‘Ghosts’ meanwhile find the return of a character previously found in an earlier Redfern number. Largely acoustic, played on a vintage guitar, with an “Appalachian feel” I am informed, but can only testify it justifies the guitarist’s wearing of a cowboy hat, and develops from laid back mood to a wider-screened intensity. ‘Saving Grace’ flows naturally in afterwards, mellow, melancholy, his voice sounds quite different when allowed a softer approach, more nuances effected and clearer diction, the backing harmonies adding a drifting dreamy slant on things. Back to some bigged-up blues rock we have ‘Sanctify’ before once more drifting back into melancholy more acoustic manner, almost acting like coda with ‘Stone’.

…The Fire Cosmic offers far more diversity than I expected. For the most part it also flows like a traditional long-playing album, with themes and the like blending and contrasting suitably, but there’s some standout tracks nonetheless. A good listen, not a one-time listen, deserved of loud playing on speakers not headphones, and presumably a fine taster of what to expect from Troy Redfern when he goes out on tour as special guest to Wille & The Bandits on their forthcoming UK tours. 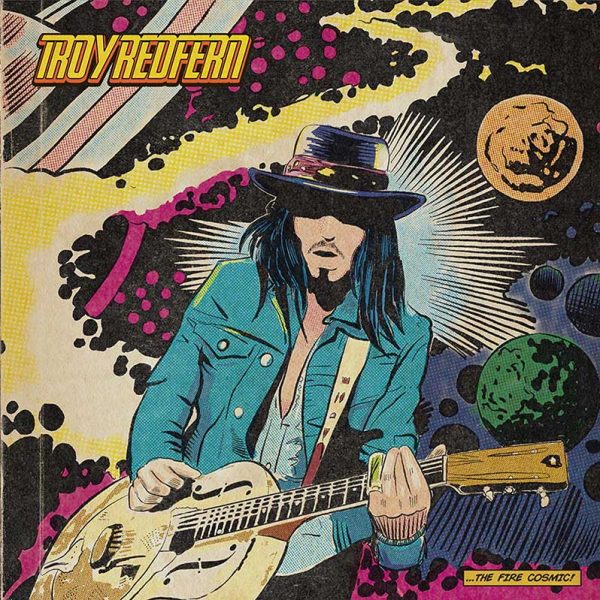