And it’s a doozy. Hindsight is a wonderful thing, helping us to see clearly that an album labelled a slight disappointment back in ’95 is actually a thing of living, breathing, Les Paul wielding beauty here in ’22.

The classic 90’s line up is all present and correct (including late vocalist Eric Wagner), and they were still fully in their long hair/flares/Marshall amp classic/stoner rock phase, having put Doom to one side for the time being…although not entirely.

With no messing around, the album picks up where ‘Manic Frustration’ left off. Those killer guitars, courtesy of Bruce Franklin and Rick Wartell, kick up an almighty storm – it’s funky, bruising psyche rock, recalling and matching the great classic rock guitar duo’s of yore, it genuinely hits a fearsome groove.

‘The Eye’ edges closer towards Doom with it’s divebombing riffage. It’s scruffy, heavy and more than ready to rumble, wrapping things up with an almost overwhelming six string wig out.

Several tracks shuffle towards a slightly mellower vibe. Their titles are giveaways – ‘Flower’, ‘Requiem’. Despite staying nicely raw, there are hints of psychedelia and even Goth but, Trouble being Trouble, they can’t help themselves, the guitars will always kick in at some point during the proceedings.

But mostly it’s heads down and amps turned up to 11. ‘Porpoise Song’ sounds like some beastly union between Black Sabbath and Traffic – a far out hippy anthem that gets bundled into the back of a van and violated by a gang of Hell’s Angels while Wagner does his finest Ozzy impression on the down tuned ‘Another Day’.

We finish with a very heavy and somewhat unlikely cover of the Beatles psychedelic masterpiece ‘Tomorrow Never Knows’, complete with bad Scouse accents and overdriven guitar thuggery and, finally, the potted epic that is ‘Till The End Of Time’, which wraps it’s killer chorus in flamethrower guitars. After all, it’s what Trouble do best – marry melody to kick-in-the-teeth twin guitar assault.

If you had this in the past and lost it, or never had it and are new to the band, this is damn near essential. Trouble were on a hell of a roll at the time (and, unbeknown to any of us, about to go into an extended hiatus) and ‘Plastic Green Head’ is up there with their very best work. If you’re lookin for trouble… 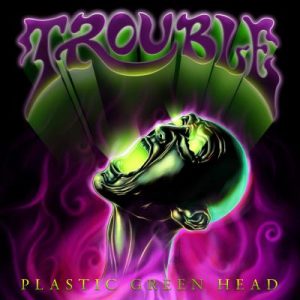