1992 and Trouble’s star is firmly in the ascendant. Newly signed to Def American records, they recorded their brilliant, career best ‘Manic Frustration’ with Rick Rubin. World domination appeared to be imminent. And then…the band were dropped by the label for “not meeting expectations” and they gradually became a textbook example of a “what happened to” band. Still producing good stuff but slowly and surely dropping from the radar.

However, in 1994 Trouble embarked on a European tour and recorded a 5 track EP for sale on said tour. Only 1500 copies of the CD were ever produced…until now. Those good people at Hammerheart Records have seen fit to reissue the EP alongside the bands rather excellent ‘Unplugged’ album and release them together in a handy LP/2CD package. Result!

The EP, for any fans of ‘Manic Frustration’, is a gem. A follow on and continuation of the scruffy retro metal sound honed by the band and Rubin. Shorn of that albums slightly psychedelic trappings, this just all-out rocks. From the menacing intro of ‘Goin’ Home’ to the Steppenwolf on steroids and bad acid of ‘Doom Box’, it’s a trip. A trip full of snarling twin guitars, wild abandon, Metallica style chugging riffage, amplified, dirty, Zep-esque slow blues and none-more-Sabbath Doom workouts.

‘Unplugged’ is also a joy. Kicking off in a bluesy, acoustic groove with a hint of Mark Lanegan and some Plant style shrieks. ‘Rain’ is a beautiful, piano-led ballad – they’re no one-trick pony, this band, there’s talent by the bucketload and a pinpoint ear for a good melody.

An acoustic reading of ‘Requiem’ (from the EP), ups the Zeppelin influence while the twangy ‘Smile’ has gentle Hendrix flourishes. Just about two-thirds of the way through the album, the band seem to decide that they’ve had enough of this unplugged malarky and begin to turn up the amps. ‘Mythic Hero’ has goth leanings, with shades of ‘Love’ era Cult while ‘Waiting For The Sun’ (not the Doors song) rips up the unplugged rule book and torches it in a ‘Fire Woman’ blaze of bruising guitar pyrotechnics. The band seem to have come full circle and are in ‘Manic Frustration’ mode again, finally tearing through a scorching rendition of the Yardbirds ‘Heartful Of Soul’.

So there we go. Any Trouble fans out there will need this, plus, it’s a fine tribute and send off for Trouble vocalist Eric Wagner, who sadly passed away last month from Covid complications. It’s two great, rare releases for the price of one, so snap ’em up now and remember Trouble in their rambunctious prime.

Released by Hammerheart Records on 1 October 2021 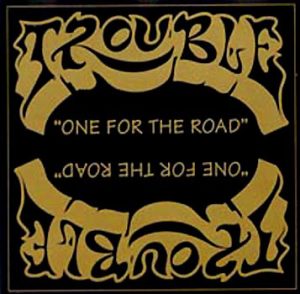