The talented trio at the core of Trapeze, Mel Galley, Glenn Hughes and Pete Holland progressively elevated the band’s unique brand of hard / funk rock as they constantly sought to overhaul their own template during the band’s short lifespan (1970-79).

Time has continued to burnish the bands reputation, and with this 2CD Best of… release you’re constantly asking yourself why this band didn’t reach out beyond the cultural conventions of seventies’ hard rock more succesfully.

Disc 1 is effectively The Best Of… CD, where we hear the band grafting Hughes’ rubbery funk bass runs to Galley’s crafted chordwork, most especially on ‘Way Back To The Bone’, ‘Coast To Coast’ and ‘Your Love Is Alright’. What impacts you most is the fact that there’s a rigour to Trapeze’s music, a technical brilliance that’s hidden behind fluent, impressive playing, most notably on ‘You Are The Music’ and ‘Will Our Love End’. Hughes gets all the vocal plaudits, but Galley’s guitar, voice and writing helped lay the foundations of Classic Rock.

Hughes jumped ship to Deep Purple in ’74. Three years later Galley brought in singer/guitarist, Pete Goalby (later to join Uriah Heep). His first Trapeze gig was captured here on CD2… Live At The Civic Theatre Mansfield, April 1977. And credit to the guy, he rocked the house. The gig was recorded by local radio and has been bootlegged over the years, but this cleaned up version sounds enormous. Goalby’s songs, ‘Don’t Ask Me How I Know’ and ‘Living On Love’ are powerful additions to the band’s set list, and both were to feature on Trapeze’s 1979 album, Running.

Innovative touch here – there are four interview segments, spread across this disc, and these act as a companion piece to new liner notes written by Malcolm Dome, based on recent one to one interviews with Hughes and Goalby.

Nothing will ever totally complete the picture of events which took place 40 years ago, but this 2 CD set gets close. 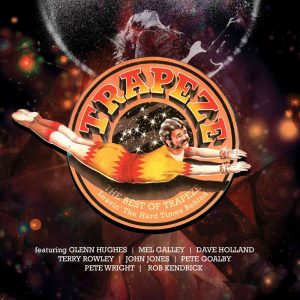