Although billed as Touchstone’s Annual Christmas show at The Robin, it was more significant in that it came at the end of the band’s first series of shows with a new line up. During 2015, former singer Kim Seviour resigned from the band on health grounds and keyboard player/singer Rob Cottingham also quit to pursue other musical projects. The remaining members, Adam Hodgson (guitar), Moo Moorghen (bass) and Henry Rogers (drums) subsequently announced the recruitment of Aggie Figurska to become the new singer and Liam Holmes to take care of keyboard duties, and although the band are still to record their first album with the new line-up, there’s an EP of new material available, so it was going to be interesting to see what the new line up had to offer.

As this was something of a special gig, the organisers had put a tempting bill together. The Heather Findlay Band supported Touchstone on this short tour, and opened tonight’s proceedings at what felt like the early time of 7.00pm. This was a cut-down version of the band that gigged earlier in the year, tonight playing as an acoustic four-piece, with Heather herself on vocal, guitar and recorders, Martin Ledger guitar, Sarah Dean harp and recorders and Henry Rogers percussion and occasional piano. An eclectic mix of instruments that matched the choice of music in the set. The band also have a new CD out, I Am Snow, which mixes rerecorded songs from Heather’s career with some covers and some new material, all with a loose theme of winter and woodlands. They opened with a song from her Mostly Autumn days, ‘Eyes Of The Forest’, followed by a cover, ‘Winds Of Winter’; a song by the folk band Fotheringhay, in honour of the late Sandy Denny, and the first of the new songs, ‘Dark Eyes’, which was excellent, atmospheric, yet with a chorus that begs to be sung along with. To my surprise and pleasure, she also added in a song from her appearance on the Ayreon album The Human Equation, ‘Day 13 – Sign’ as well as all four members collaborating on ‘Gaudete’, the traditional carol and brilliantly performed tonight, with Heather taking her voice into a higher, completely new range. The title track of the new CD, another very fine song, ended a set that had been consistently excellent and superbly performed. As someone who’s followed her career for several years, I have to say she’s currently singing better than ever, with more emotional depth in her voice, and a willingness to try new things. Let’s hope we hear much more from her in 2017, but for now, this was an excellent early Christmas present

Since their formation in 2015, Ghost Community haven’t played a lot of gigs, concentrating on recording their debut album Cycle Of Life. The first time I saw them, supporting Franck Carducci before the album was recorded, my impression was that it was very much a work in progress, and this second chance to see them might not have been the best time to give them a second hearing, as a few weeks ago, drummer Jake Bradford-Sharp was diagnosed with a collapsed lung, and at the time of the gig was still recuperating, so the band had to draft in session man Giffy Grifftiths to play the show. Despite that, this was an impressive set from a unit that appeared to be far tighter and more focussed than a year ago. With Jake and bassist Matt Cohen’s history in The Reasoning, you might expect there to be a strong Prog influence in the band, and while there are certainly some Prog elements, they currently have a far more prominent ‘70s Classic Rock sound, bringing Deep Purple to mind, led by Moray McDonald’s keyboards. Their 45-minute set included most of their album, beginning with ‘Rise Up’ and enhanced by a bit of Floyd to introduce one track and some of ‘Kashmir’ to introduce ‘Ghost Community,’ the song. The band are tight as you like, even with minimal rehearsal time Matt Cohen and Giffy Griffiths were a watertight rhythm section, Simon Rodgers’ guitar made its presence felt without ever trying to dominate, and Jon Paul Vaughan’s voice is strong and powerful, even if his stage mannerisms are rooted firmly in the 1970s. The set finished with an edited version of ‘Cycle Of Life’, the album’s epic, polishing off a fine set, and definitely bookmarking Ghost Community as a band to keep an eye on in 2017. 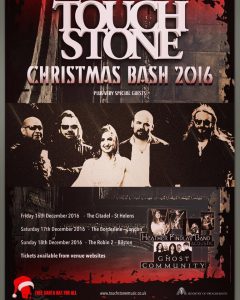 Naturally there was a sense of anticipation in the air as Touchstone’s set began, but if there were any doubts or apprehension about the new incarnation of the band, they were probably blown away within the first few minutes of the opening song, ‘Flux’, and it was also evident that this is going to be a much more powerful and heavier version of the band, moving away from the melodic prog of previously, even moving toward symphonic metal at times. Similarly, considering this was only her third gig with the band, Aggie Figurska impressed from the start, being able to move from the heavier passages of the songs to the more melodic material almost effortlessly, and while she was at it, throwing in some admirable hair swirling headbanging. Her voice is excellent, too, reminiscent of Charlotte Wessels at times, and she was clearly growing into her role as frontwoman pretty quickly. I should also mention bassist Moo, who did a good job in taking over Rob Cottingham’s second vocalist role, an important part of Touchstone’s overall sound.

The set was taken from across the band’s recording career, including all three tracks from the new EP, and of the older tracks, ‘Throw Them to The Sky’, ‘Zinomorph’ and ‘Contact’, with its slowly building intensity, were particular highlights. The new song ‘Fear’, too, bodes well for the band’s future, with a growing presence that came over really well in this set. This being a Christmas show, the main set ended with some appropriate silliness, a riotous version of ‘I Wish It Could be Christmas Everyday’ and a touching tribute to Greg Lake, who’d passed away a few days before the gig, ‘I Believe In Father Christmas’, a large part of which was sung by the crowd. The main set had lasted just over an hour, but there was a lengthy encore, including an excellent ‘Wintercoast’ and ‘Strange Days’, which went down really well with the crowd, finishing off with the title track of the new EP, another very encouraging pointer for the future.

All in all, this was a really good night, with some of the very best of the current UK Prog scene, with three acts who look to have a lot to offer in the coming year. Hopefully they’ll each come back to the Robin soon.