Cause to rejoice, Toto are back. And in a slightly new configuration – which is no surprise, this is, after all, the 15th incarnation of the band. But rest assured, it’s a good one. Our soft rock heroes are led, as ever, by guitar maestro and only remaining founding member, Steve Lukather. He’s joined by long standing vocalist Joseph Williams and, for two songs, David Paich.

For those not in the know, Toto were, originally, a musical A-Team, a motley group of crack LA session muso’s who wanted their own moment in the spotlight (which worked out pretty well for them). They were also Michael Jackson’s backing band for the ‘Thriller’ album which, if memory serves, went on to sell one or two copies.

So, yet again, this long-serving trio are aided and abetted by a new team of ace musicians, among them are jazzers, rockers, soul boys and many years of collective road and studio experience with, among others, Robert Jon and The Wreck, Ringo Starr, Snarky Puppy and Prince! These guys can play, but do they gel as a band?

The answer is, to put none too fine a point on it, a resounding fuck yes. This was, as with much live output over the past year, a one-night-only live stream lockdown event, played to a mere handful of friends and family, which explains the barely audible smattering of applause and whoops between songs, but from the fiery intensity of the performances, you’d never know.

The set list is eclectic, a nice mix of hits and slightly deeper cuts and no, before you ask, there’s no ‘Africa’. The band, however, sound stunning, it’s instantly Toto, that rich sound is there in spades. There’s an instant vibe, Williams sounds great and Lukather is on scorching form, everyone sounds sharp and committed.

‘Hold The Line’ is played very early on, “because”, says Lukather, “we have to”. It’s the shortest track on the album, dispensed with quickly and efficiently. Which is not to say it’s not good – it is. Very good. Very good indeed and, by the sound of it, much fun was had in it’s performance.

And then we’re off and running. ‘Pamela’ goes off into a cool jazzy jam while the 8 minutes of ‘Kingdom Of Desire’ is a guitar masterclass – harking back to Toto’s proggier leanings, Lukather wails and howls – no wonder so many guitarists look up to him. ‘White Sister’ moves from jazz to another Lukather six-string detonation to an extraordinary drum solo. Yes, a drum solo, in a lockdown show with virtually no audience. Brilliant.

There are so many treasures on this album. A flawless take of ‘I Won’t Hold You Back’ – one of the stand out tracks off of their career best ‘IV’ album. The expansive highway rock of ‘Home Of The Brave’ which stops dead before unexpectedly kicking off again, the band moving as a well-oiled machine.

And then we’re into the home stretch. David Paich joins in for a huge, note perfect roar through ‘Rosanna’, complete with an extended version of the cool little jam at the end of the studio version and a final blast through ‘With A Little Help From My Friends’ (the Cocker version) which is as epic and rocking as you could hope for.

The only negative to all of this is that it wasn’t longer. This is no contractual obligation band doing it for the T-shirt sales, Toto mark XV are on fire, soaring through a set that’s better than anyone has any right to expect. It’s hard to overstate how good this band is – think of a great live band, any live band…Toto are pretty much better. Yes, they’re ace session muso’s but they mean it maaaan, this band can do anything that’s asked of them, and do it with class, flair, energy and style. And they ROCK. Let’s hope that they wash up on these shores after they play the rest of Europe next summer, these will be gigs you don’t want to miss. Class. 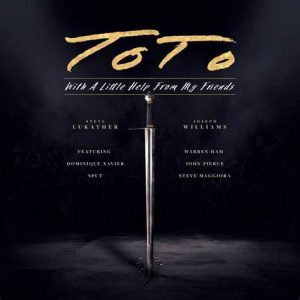