The title of Toto‘s 2017 album, 40 Trips Around The Sun, was an elegant, eloquent way of emphasising this legendary, 40 million selling band’s longevity. Rewind to 1975 and Boz Scaggs’ 5 million selling Silk Degrees. Hungate, Paich, Porcaro and Lukather were the studio band put together for this seminal recording. Two years later they were Toto, and just beginning.

40 Tours Around the Sun is an elongated live version of 2017’s 40 Trips …, itself a bulky “Greatest Hits with added new stuff” release. The musical history of Toto in 26 tracks over 2 hours 44 minutes doesn’t sound enough to reflect a lifetime of Top Ten hit singles, multi million selling albums, true stories of life, drugs, death, break ups and reunions, but in reality, 40 Tours is as immersive as any chronicle of a band’s career is likely to be.

Still together after all these years are Steve Lukather, Joseph Williams, David Paich and Steve Porcaro. Using the one-two punch of the new song (Alone) and the first ever ‘hit’ song (Hold The Line) to open the set is a masterful touch. They might joke that they are “uncool”, but going on to scattergun immense songs like ‘I Will Remember’, ‘Jake To The Bone’, ‘Roseanna’ and ‘Georgy Porgy’ throughout the first half of this Amsterdam gig is the very definition of copacetic. The fact that these giant songs hold hands with the lesser known ‘Spanish Sea’ and ‘English Eyes’ among others, subtly emphasises the changing temperature of Toto’s unfolding live music drama. And by this time you suspect that the sonics may have had the GDP of a major industrial nation spent on them… the audio is 3 dimensional, reach out and you can touch it, feel it, taste it. It’s an approach that lends a mainstream sheen to a band who now occupies its very own rock’n’roll niche. Even now their audience seems in awe of a band who seldom put a live foot wrong.

Melodic rock cadences swirl and then solidify in the second half of the gig, coalescing around fan favourites, ‘Mushanga’, ‘Girl Goodbye’ and ‘Stranger In Town’, only surrendering ground – eventually – to Lukather’s razoring guitarwork on a cover of George Harrison’s ‘While My Guitar Gently Weeps’.

Inevitably, the usual suspects appear. ‘Africa’ and ‘Stop Loving You’ are met with the audience acclaim they always enjoy, and the set closes with the magnificently apposite ‘The Road Goes On’.

Despite all the evidence – the best selling singles and albums – Toto were dogged throughout their career by accusations that their music was too anonymous to attract a wider fanbase, in fact that they were “uncool”. Lester Bangs got it right : “The only true currency in this bankrupt world is what you share with someone else when you’re uncool.”

This release is packaged as a 2 CD set/ a 2 CD + DVD set/ a 2 CD + Bluray/ a vinyl version/ and the whole damn lot plus a book version. Spoilt for choice. 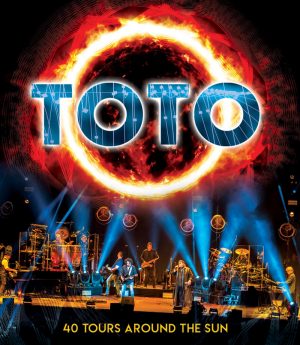