Reviewed by Brian McGowan and released by Contante&Sonante, Spain in October 2017.

Tomi Malm‘s name is likely unknown to all but Westcoast Rock aficionados. His 2009 recording, Fly Away, an album of David Foster covers, featured vocalists such as Warren Wiebe (RIP), Bill (Chicago) Champlin and Robbie Dupree, all seasoned veterans of the genre.

You could argue that you can’t go wrong covering the “hitmaker”s material, but such was the quality of the musicianship, the production and the (re)arrangements that it became a worldwide success.

Walkin On Air is the classically trained writer/producer/musician’s first album in his own name, and you’ve got to be writing good stuff to attract Jason (Chicago) Scheff, Clif Magness – google him and be impressed, Jeff Pescetto – regular David Foster collaborator, keyboard player Robbie Buchanan, guitarist James Harrah and on and on. How Malm got all these world class musicians involved speaks volumes for his his own skills and talents, and indeed, reputation.

What’s most most notable about them, especially the vocalists, is that no matter how strong a presence they possess, you always sense they’re holding something in reserve, a confidence in the architecture of Malm’s songs, robust yet pliable, a seduction rather than a conversion.

The icing is the inclusion of Frank Adahl, vocalist in the Edin/Adahl band, something of a legend in Scandi Westcoast circles, and the late Warren Wiebe. Hear Adahl giving ‘Favor’s lyrics room to fly in Malm’s airy production, and listen to Wiebe’s carefully managed emotional detailing on ‘Show Me A Sign’, both singers skillfully tuning us in to the warm hues of the genre’s resonant frequency.

The MOR radio friendly ‘Walkin On Air’ and the balladic ‘Perfect Imperfection’ are the most immediate, accessible tracks. Both swaying with sweet, lightly polished melodies that quickly find their groove in amongst the jazzy inflections and late nite smooch appeal. The whole album is a voyage of unhurried discovery, a patchwork quilt of sandswept sounds and pastel colours, slowly revealing the intimate moments for which the genre is best known. From the breezy optimism of ‘Let’s Get To It’ to the pop sensibilites of the proto-Foster ‘You Belong With Me’, every track here possesses moments of sheer gorgeousness.

It can be argued is that the genre is now on the outside of popular music culture, looking in. But what cannot be argued is the fact that for fans it’s been worth the wait, and that Walkin’ On Air is unquestionably a high water mark in the post Foster era of Westcoast rock. 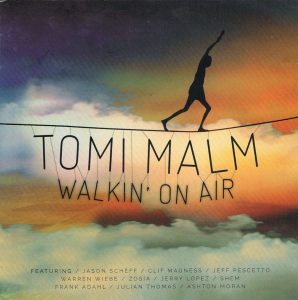