As far as album titles go, Savage Gold is certainly on the money. The latest release from the Brooklyn bruisers Tombs is indeed a glistening nugget, albeit an abrasive one full of rough edges and sharp points that will take your eye out before you’ve got a chance to blink. Not only is the album well named but so are Tombs as they inhabit a murky underground world of confrontational extreme music. They may need to be ready to emerge blinking from their crypt before long though as Savage Gold has the quality to expose Tombs to a bigger audience.

This is the New Yorker’s third full length release, and one eagerly anticipated by their growing band of fans following on from their much lauded 2011 release, Path of Totality. There have been a couple of line-up changes since then although Mike Hill remains Tombs’ commander in chief. Garett Bussanick is the new guitarist while Ben Brand has brought a more technical dimension to the bass lines. Interestingly the production whizz is Hate Eternal’s Erik Rutan, whose mark of distinction has been left on many a fine death metal release from the likes of Cannibal Corpse and Goatwhore. Tombs though paint a suffocating picture far removed from the likes of Big Apple brothers Immolation. The music is dark, deep and desperate but it’s also complex and challenging. It forces the listener to work hard to unravel its myriad of twisted lines that on occasions throw up more loops than a bowl of spaghetti. The marker is dug firmly into the soil with album opener ‘Thanatos’ in which Hill’s distressed vocal delivery fights for air against some bloodied blast beats and feral riffwork.

‘Portraits’ follows on swiftly in the same vein, restless animated drumming competing against demanding rhythms that somehow gel together to create another epic moody landscape with the crawling vocal angst of Hill bringing a scarcely human element to the package. An acute guitar pitch cuts through the early part of ‘Séance’, a more methodical offering with perhaps less diversions than elsewhere, but still a grinding number throbbing with violent beats cloaked in darkness and despair. There’s a distinct change on the album’s longest track ‘Echoes’ in which Hill drops his usual warcries to engage in some cleaner vocal styles although the tone remains defiant. By the end of the track, against an armory of incendiary drumming and crashing guitars, Hill finds his voice once more with desperate shrieks of ‘Echoes’ raising the friction levels.

Following number ‘Deathtripper’ is something else entirely and distinctly different from the majority of Savage Gold. This carries an almost post-punk sounding emptiness, Bauhaus-like in its icy tone, with Hill’s monotone spoken delivery left to fend on its own against a cold repetitive beat. The feel is suicidal and as such also has elements of Joy Division wound through it with a sound full of emptiness and despair. It’s an approach repeated later in ‘Severed Lives’ a crawling track that meanders mindlessly with Hill’s whispered words turning the pages on a journey into the realms of lost souls. Although ‘Edge of Darkness’ sounds like another tumbling track into the abyss it is a pacier offering even though the subject matter is scarcely any lighter.

Tombs manage to convey a cruel and desperate world with frightening clarity. The pain and horror seeps through almost everything they do like a mangled wound that refuses to stop festering. Intensity levels remain rocketed up to the max throughout, with the whole album played out against a brutalized background of destructive sonic earthquakes. The final track ‘Spiral’ is a crescendo closing highlight when all four members of Tombs come together to thrash out a slobbering beast of a finale. Andrew Hernandez’s drums are everywhere, coming at you so fast you almost have to duck. The guitars combine to create a frenzied finish that swoops high and then low at an ever increasing rate of knots with a by now ravaged Hill barking and shrieking as though he’s in a wrestling match with a hungry alligator. A final cry of ‘And when you feel the darkness calling, how will your final thoughts assemble’ asks a penetrating question that few would be comfortable answering. Gold is a precious commodity. Savage Gold is no different. 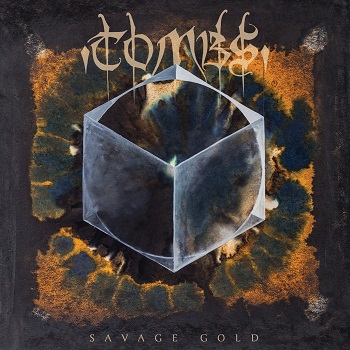