Reviewed by Brian McGowan and released by Cleopatra Records 20 October 2017.

Ten years in the making, Tom Keifer’s solo album first saw the light of day in 2013. It seemed a lifetime since ‘Shake Me’ and ‘Nobody’s Fool’ (from 1986’s Night Songs) announced Keifer as an immense talent, and his band, Cinderella as a considerable cut above their hair metal contemporaries. His ensuing vocal problems had been well documented, and listening to The Way Life Goes you had to conclude that all was well again.

Four years on, enterprising US label, Cleopatra Records has released a Deluxe Digipack gatefold Edition, with 3 bonus tracks and a “Making Of…” DVD. More later.

The album is just filled to the gunnels with Stonesy hard rock, Beatlish pop and the swampy, bluesy stuff that Aerosmith do. Yet, Keifer’s imprint is all over it like a tattoo, an indelible melodic signature that time could not erase. Lyrically, what might have been an elegiac, self-pitying tale of paradise lost turned out to be a philosophical shrug of the shoulders – the art of zen and getting your singing voice back (he never did lose his mojo).

On a handful of songs Keifer draws from co-writer, Jim (Survivor) Peterik’s expansive palette, creating a colourful new dynamic on ‘Cold Day In Hell’ and ‘The Flower Song’ that looks to push beyond the boundaries of pop metal and AOR. Keifer’s admitted present day muse – Mrs K – also gets a few co-write credits, and that inevitably led to a softening of the music in all the right places. Love gets you through. A familiar sentiment.

Skilfully, impressively, the moods and images continually shift, from ill-fitting skin (’Solid Ground’, ‘Welcome To My Mind’), enlightenment (‘Ask Me Yesterday‘, ‘Different Light‘) to redemption and the love of a good, good woman (‘Thick And Thin‘, ’You Showed Me’). Elsewhere, the chunky, bluesy, ‘Ain’t Life A Bitch’ exposes Keifer’s Aerosmith tendencies, and ’Mood Elevator’ has a slinky, old school, Faces’ feel.

But at its heart, it’s Keifer. The obsessive’s eye for fine detail remains intact, his lushly textured songs are richer than ever, and he’s never forgotten how to write a memorable melody or a winning hook.

The DVD documents the story of the 3 bonus tracks. It is especially and understandably focused on the events leading up to, and the recording of Keifer’s duet with Lizzie (Halestorm) Hale, on Cinderella’s showstopping ballad, ‘Nobody’s Fool’. Mutually awestruck by the other’s talent, their humble, respectful attitude in the studio, one toward the other, is actually quite disarming.

Once in front of the microphone, their professionalism kicks in and they get comfortable. It’s a unique opportunity to fire up a thirty year old pop-metal megahit, and Hale uses the opportunity well, blending her quasi operatic vocal power with Keifer’s raw emotion to give the song fresh impetus. That’s emphasised even further when the pair again duet on a different version of the same song where most of the recording’s instrumentation is stripped out, substituted with strings, synths and a dominant piano, underlining the protagonist’s emotional frailty.

Sandwiched between, Keifer’s soulful version of ‘With A Little Help From My Friends’ is something of a revelation. It’s clearly modelled on the Joe Cocker version but holds the bombast at arms length, reaching back in time to recapture some of the loneliness and vulnerability at the heart of the Beatles’ original.

This deluxe version of The Way Life Goes is unquestionably an album that should be announced on a red carpet, with a trumpet fanfare. But perhaps it will have to do with the quiet acclaim of the discerning few. 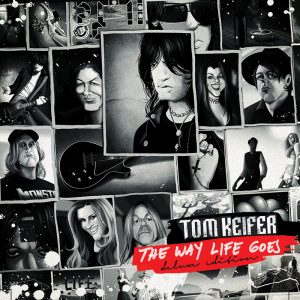 DVD : The Making Of Bonus Tracks