While other genres rise and fall there’s a reason why heavy metal has stood the test of time. Quite simply, it’s the mutt’s nuts and one of the best modern propagators are Toledo Steel. Named after a city in Spain famed for producing a particularly tough brand of sword, this Hampshire quartet certainly live up to their name and their sophomore album Heading for the Fire is as hard as they come.

After finding their feet with a demo and two EP’s Toledo Steel really hit their stride with 2018’s No Quarter long player. The preceding three years found the band finely honing their sound and opening shot ‘On the Loose’ gets Heading for the Fire off to an explosive start. Bold and brash, it attests a band who are full of confidence and it’s immediately obvious that Toledo Steel aren’t here to take prisoners. Imagine Judas Priest jamming with Metal Church, and you’d have something approaching the crushing brilliance of ‘On the Loose’. With an impressive vocal range Rich Rutter sings, squeals and snarls over a killer riff as the band power forward like a runaway locomotive. With barely a pause for breath ‘Into the Unknown’ saunters into town and, with drummer Matt Dodson intent on nailing his kit to the studio floor, reveals itself to be a punchy number that could floor even the hardiest metalhead. However, for all their brute force the band never lose sight of melody and, like all of the tracks on this record, remains a delectable earworm.

In Heading for the Fire Toledo Steel have produced an album that’s a true celebration of metal. It’s a testosterone fuelled carouse to Reagan-era heavy metal (think Exciter and Grave Digger) but don’t write them off as mere copyists; it’s a loving homage but with an original edge. Take the rumbustious ‘Smoke and Mirrors’ for example. It throws its weight around like a prize-fighter, yet the neat jazzy breakdown mid-song adds a touch of lightness and brings to mind classic Sabbath, and it’s such decisions that elevate Toledo Steel above their peers. The aptly titled ‘No Time to Lose’ sets the hounds loose and, like a sword wielding maniac, sets out to cause all sorts of havoc and, as it states on the tin, it’s “Burning the candle at both ends”.

In an age when bands spend ages cultivating a perfect public persona there’s something refreshingly honest about Toledo Steel’s aesthetic. They look like four guys from your local biker bar; heavy metal is what they promise and that’s exactly what they deliver. The final two tracks find the band flexing their musical muscles. ‘Rituals By the Firelight’ is a slow builder which evolves into a crushing bruiser that swings like a huge pendulum which gradually comes closer to your neck then, and without warning, we jump into final track ‘Last Rites’. A nine-minute sonic assault that finds guitarist Tom Potter interspersing electrifying solos with some of the heaviest riffs known to man. Pulling all the strands which comprise Heading for the Fire into a cohesive whole it ensures the album comes to a cataclysmic conclusion.

Handling the “difficult second album” with apparent ease it seems the world is the oyster for Toledo Steel. The future of metal is in safe hands. 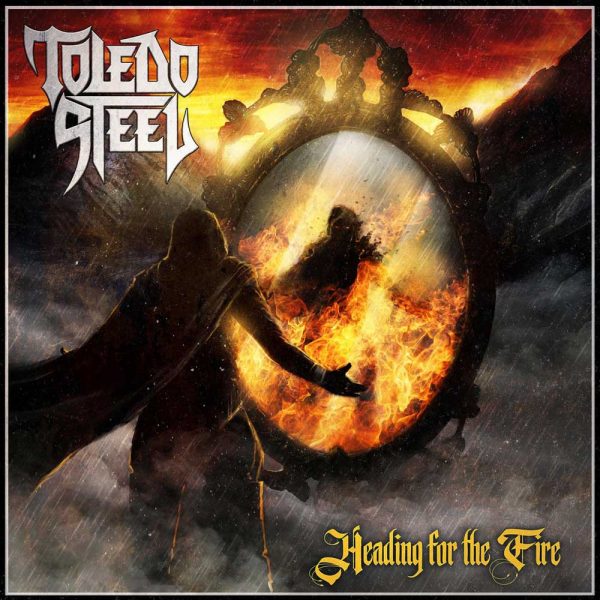