Former Chrome Molly & Demon guitarist Tim Read has released his debut solo album. Entirely self financed, it’s a formidable hard rock gem of a release that has had no expense spared. Issued in a gatefold digipac sleeve that follows the newspaper theme of the Daily Read throughout there’s lots of little bits to make your way through and the 16 page booklets contains lots of photos and interviews with the band members as well as track summaries. On the CD itself, there are 13 original tracks with a collective sound that shamelessly harks back to the classic 80’s era of hard rock. It’s easy to spot the influences and if you’re a fan of Foreigner, Blue Murder, Whitesnake and FM then this CD will sit more than comfortably alongside any of those.

While Tim handles all guitars and lead vocals, the rest of the band is formed around fellow Demon members Paul Hume (bass) and Neil Ogden (drums), and the addition of FM’s Jem Davis is a masterstroke. The production is top notch and focuses on the song rather than the individual. The album opens with a full blooded driving rocker in ‘Surrender’

‘Close To You’ is an early highlight with plenty of dynamics between the heavy riffs, guitar and organ solos and lighter sections. ‘’The Girl Is Trouble’ follows as a heads down, fast paced rocker that gets the blood pumping with some incendiary harmony lead guitar work, and ‘Playing With Fire’ is the big sing-a-long tune that’s sure to go down well live. Covid’s clearly put a hold on that for now, but hopefully Tim will want to get out and play these songs live as soon as we can all hit the venues again.

Many will, of course, be familiar with and know Tim from his 10 year tenure with Thin Lizzy tribute Limehouse Lizzy and has previous stint in Dizzy Lizzy so it seems apt that he pays tribute to Phil Lynott in ‘Are You Out There?’ squeezing in as many lyrics and references as possible while paying homage musically to that classic Lizzy sound. ‘Nowhere To Run’ is another stand out track full of drama and a slow eastern feel peppered with tasteful guitar and keyboard fills throughout.

Closing ballad ‘Don’t Go’ is something of an epic, opening with an acoustic guitar and sympathetic organ and slowly builds into a monster replete with the kind of guitar solo you’d expect to see played atop a castle or in Monument Valley in the accompanying video. A great track to end the album.

The album is available to buy exclusively from Tim Read’s website; https://www.readoutloudband.com/shop 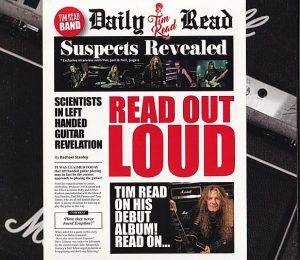