Review by Paul Woodward and photos by Mark Lloyd

First up of tonight’s four bands is much talked about Welsh rockers Hangfire, I’ve heard a lot of positive’s through the grapevine about these guys

and tonight is my first opportunity to check them out. If I’m honest the songs failed to have any real impact on me and nothing really stood out. I think the band really need to write a few more killer tracks to stand out amongst the glut of Blues influenced ‘Biker bands’ that are around at the moment.

One song that really made me sit up and listen was ‘For Crying Out Loud’ which the band have been pushing as a single, it also garnered some good reactions from the early bird crowd! They also played ‘You’re No Angel’, ‘Faith In Me’, ‘Adrenalize’ and ‘Drop The Ball’. Blind guitarist Lizzy Evans has some real talent that is undeniable even though the songs tonight lacked real bite for me, I was still impressed with a few of his guitar licks and solos. Front man Max Rhead has a likeable stage persona who chatted frequently with the audience and has a decent gravel-filled voice perfect for this style of rock, the only real quibble I had is that he mentions Lizzy’s blindness at every opportunity – almost as if it was part of the stage act. Lizzy’s disability is obvious and of course the singer relating this too the crowd in jovial and affectionate ways is nice to see and endears the fact that his disability makes no difference to how he is treated or viewed by the rest of the band. BUT to quote Max himself when he referred to Lizzy ‘Milking It’ when it came to his blindness – he was just as guilty of it tonight! 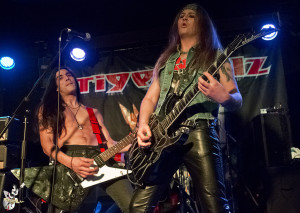 Another band I’m hearing a lot of buzz about is Brummie sleaze / glam rockers Lovebite and they are next to hit the compact Slade Rooms stage. Half way through the first song I’m thinking to myself, now this is more my type of rock n roll. These guys are obviously influenced by the more melodic ‘Hair Metal’ and sunset strip bands of the late ‘80’s and musically these guys put a huge grin on my face – I think it’s about time I tracked down their album ‘Lock N Load’.   The sound did let the guys down on a few occasions, but overall I enjoyed their set, I wasn’t too sure about Johnny Sparks vocals on the night though if I’m honest. I’d like to check the album out and hear the band with a better sound live before being too harsh though. I love the bands on stage attitude which reflects perfectly the rebellious nature of their music. They played ‘Breaking The Rules’, ‘Sin City’, ‘What’s The Point’ and ‘Too Much Is Never Enough’.

They choose a great song to cover in Danger Danger’s ‘Don’t Blame It On Love’ a song I love by a band I adore! Unfortunately they totally murdered it, but it’s great to see these guys have a great taste in music and their influences! I have to say I was impressed and I will definitely be hearing more of  Lovebite in the future!

I have seen Black Country rockers Shyne once before supporting Lee Small at the Robin during the summer, their debut gig, and was really impressed with their brand of 80’s inspired melodic rock. So I

was keen to witness the band again, the first thing I noticed is they all seem far more confident on stage especially singer Toni Gale who struts around, engaging the crowd with every word and arm sweep dragging the audience into their rock n roll circus!

As much as my Robin loving ass hate’s to admit it the Slade Rooms seemed to suit the band’s sound so much more than the Robin. At the Robin I felt they needed something to fill their sound out, more backing vocals and keyboards was my thinking. Here at the Slade Rooms though they sounded huge and their infectious rock n roll engulfed the small venue. They sounded so much more impressive tonight and a mate of mine who had criticised Toni’s vocals previously, would have been far less critical as his performance tonight was much stronger. The sound wasn’t perfect for them but I don’t think this hampered how they came across to the crowd who eat up the bands energy and enthusiasm with relish! Shyne already have a good selection of songs with varying styles so these guys won’t get accused of having an album that all sound the same! Ranging from songs that pay homage to the hair metal sound of the late 80’s to more obvious smooth melodic rock that I love. There’s a lot of momentum behind this band so here’s to hoping for more shows and a debut album to be in the works before too long.

I saw Welsh glam-sters Tigertailz right here in the Slade Rooms a few years back and had a cracking night, there have been a few line-up changes since then though in fact the only musician returning from that gig is guitarist Jay Pepper. Original Tailz drummer Ace Finchum has rejoined and completing the line-up is fellow Welshman Jason Sims on bass, Rob Wylde on guitars (Teenage Casket Company/ VEGA) and Australian Jules Millis (White Widdow) on vocals.

I’m not sure on exact turn-out figures but it did feel like the crowd tonight wasn’t as big as the previous Wolves show. Which surprised me a bit given the solid reputation the Tailz have as killer live act, I presume it may be down to the line-up changes. Regardless, they crashed onto the stage like returning heroes!

Again the Tailz rocked the Slade Rooms to the ground and the new line-up delivered a storming rock n roll show. They are perhaps a little less metallic and sounding a little softer leaning towards the bands original glam origins. I think with the inclusion of Jules on vocals it was inevitable the band may veer to a more melodic rock sound than the glam metal sound the Tailz had grown into in recent years. I had seen Jules front his melodic rock band White Widdow earlier in the year and although I’d been told he was unwell that night I felt he struggled as a live vocalist as I love his voice on both the White Widdow CD’s. So I have to admit I was a bit worried how he would do tonight.

It was like watching a totally different front man; he was exuberant, energetic and controlled the stage. He kept the audience’s attention and jumped on the barrier on many occasions to lean into the crowd. Most importantly though Jules’ vocals were spot on, he was a thousand times better than the last time I saw him and although he doesn’t have the same voice as we are used to hearing sing these songs I think he not only does them justice but brings a renewed energy to the band on the Tailz’s earlier material. Although I’m sure the band were totally knackered after their Hard Rock Hell shenanigans they soldiered on and gave us a very enjoyable evening of rock n roll mayhem! They played a shortened festival style set which I presume was their HRH set list from the previous evening. So we heard ‘Living Without You’, ‘Sicksex’, ‘Love Overload’, ‘Tear Your Fucking Heart Out’, ‘She’s Too Hot’, ‘Twist & Shake’, ‘Dirty Needles’, ‘Hollywood Killer’ and inevitable set closer and crowd pleaser ‘Love Bomb Baby’. I have to admit the crowd weren’t as noisy as the band’s previous visit but this didn’t dishearten the Tailz who looked like they were having a blast onstage. Jay Pepper again was very vocal throughout the night, talking about Pepsi Tate and money that had been raised over the past few years in his name and it’s great to see that the Tailz bass man will never be forgotten and forever missed. Jay always does his bit to get the crowd revved up and once again he calls for a roar from the crowd asking ‘are we in the Black Country!’ and he gets his roaring response!

For those with any doubts about the new Tailz line-up I can whole heartedly state they are well worth seeing and they are doing a bang up job of keeping the Tailz music alive!

You can find more images from the gig here: