Last year Thundermother brought out their fourth album. It reached No. 6 in the German charts and did similarly good business in a number of other European territories. What effected this rise in fame from raucously energetic young road-warriors, who just happened to be young Swedish females, into something that little bit more special? And all this despite, not so much a steady-shuffling of their line-up, more a sharp-culling come night-of-the-long-knives, depending on who you ask in recent times. It effectively left founding guitarist Filippa Nassil fiddling on her lonesome before solidifying a new rhythm section in Majsan Lindberg (bass) and Emlee Johansson (drums). More importantly, as they’d had a good singer previously, getting Guernica Mancini to sign on board as vocalist was a box very well ticked.

The AC/DC musical template instigated since day one remained a constant within Thundermother’s wall of sound. And while it’s still only rock ‘n roll, producer Soren Andersen’s presence was felt to good effect on Heatwave with more fully-rounded arrangements, clearer hooks, solos given succinct purpose, and in a number like ‘Sleep’ a mature depth added to proceedings that could take them far. A year down the road, the Deluxe Edition of Heatwave sees the original recording re-released with a bonus CD featuring tracks not previously released, different arrangements and some obligatory live tracks. However, for those who’ve yet to hear last year’s release, let first take a gander at what you missed…

CD1 opens with ‘Loud And Alive’. It’s a call and response statement of intent with hard-on shrugging chords before a big hooked chorus grabs you, and a guitar solo walks the length of the fretboard ensuring there’s no escape. The more mid-paced ‘Dog From Hell’ feels the blues in its scales but there’s also a minor Celtic rock tinge to it, while ‘Back In ’76’ has one of those audience participation drumbeats you’ll probably love (ala Queen’s ‘We Will Rock You’) but rarely does anything for me; lyrically it doesn’t really nail down why the year was pivotal (did their parents get together at a gig back then?).

Fortunately, after a couple of detours we get more gems such as ‘Into The Mud’. This echoes the glory days of Montrose, from the uplifting Hagar style roaring vocals to the Bill Church style bass solo. Not a celebration of beauty tips me thinks but the joys of the modern live festival circuit. Euphoric as it reaches its climax, licks are unloaded freely right to the end. Title track ‘Heat Wave’ is more tempered. With chords chinking, chiming then fully resounding and a voice hollering throughout (though the chorus melody sails a bit close to the wind, echoing Boney M’s ’Ra, Ra, Rasputin’ of all things) while a guitar solo cuts in like tempered steel half-way through. The run is good, and next up is the golden egg: ‘Sleep’ was a single, and still has broad mainstream crossover potential. Power ballad in format, orchestration (presumably keyboards) and backing vocals add to what begins as an acoustic number easing into electric with a lovely arpeggio turn. However, while the music is nicely supportive, it’s the first-person narrative by Mancini that is charged emotionally. She’s a woman who is hurt (presumably just emotionally, as if that’s marginally better than adding physical abuse to such problems) by her love, outlines the inevitable split due in finding the strength to leave or let him go. Far from being sentimental, Mancini expresses vocally over a wide range of notes and style, while two guitar solos featured prove to be short but make their presence felt effectively.

‘Driving In Style’ features a sharp triggered riff that’s AC/DC by way of 70s glam rock feel (or perhaps if Geordie had a female singer) “I wanna get close” is the chorus hook and I get the impression this isn’t vehicular manoeuvres but some euphemism for sex. Being one of life’s pedestrian’s my preferences for the latter anyway – A mighty whooping scream and finger scratching solo turns everything up to 11, with the chorus getting shouted football crowd style.

Worryingly, ‘Free Ourselves’ begins as another drum back beat number but differs, with Angus’ ‘Thunderstruck’ riff given a nod and a wink, but they shift gears come the first chorus and there’s a slight psychedelic feel not unlike Glenn Hughes’ more recent solo albums, so that’s possibly Soren Anderson’s influence, he having played guitar for him. Similarly, we have the soul rocking groover ‘Purple Sky’. Another number that takes advantage of Mancini’s vocal abilities, with the use of organ and wah-wah guitar reaching way beyond that Aussie rock style, but then we’re back into that with ‘Ghosts’.

‘Somebody Love Me’ is speedy rock ‘n roll, while ‘Bad Habits’ features staccato guitar chords with a slight funk feel from the rhythm section before hitting another football chant chorus and playing out in a similar exchange through to the end. Not everything’s perfect, but it’s the tweaks in most of those songs that make them stand out and explain its European chart success. Instruments are held back and given room to breathe, you can hear what each is applying, saying, and adding to the overall effect, rather it just be an enjoyable free-for-all. And the vocals are up in the mix, something people seem to be afraid of pushing for these days, But the woman can sing, really sing…not just a throat rattling, whisky-sinking, hard-driven and hard-loving woman kind of voice but possibly someone who’s about to live life without holding back. These are not the standard Joplin mannerisms we sloppily reference as reviewers, maybe there’s a little Maggie Bell in the broader width, but more so there’s blues, gusto and soul, that takes chances and achieves.

Thus, if the first version of Heatwave is worth checking out, what about the new Deluxe Edition?

Well, CD2 is a mixed bag, but then it’s not quite what we might expect either. ‘The Road Is Ours’ is a chugging hooked groove, with a slight Stones feel, the presumably Swedish intro to ‘Show Me What You Got’ drives off into Motörhead territory albeit with obviously much sweeter vocal melodies, and ‘You Can´t Handle Me’ is a mid-paced chorus sing-along. Presumably these were tracks left off the original and in a couple of cases could easily have replaced others.

At the other end of the CD, we’ve got three live tracks: The raw AC/DC styled ‘Give Me Some Lights’, a less distinguished thrash about in ‘Thunderous’ and with ‘Hellevator’ there’s a raucous Pretty Reckless approach, and with lines like “I’m a dirty, dirty bad-ass chick” we again know the score. Then the record finishes with ‘Rock’ ‘n’ Roll Heaven’ with guest vocals from fellow Swedes, Pontus Snibb of Bonafide and Backyard Babies’ Dregan for some celebratory raw rock by numbers. Not bad, but basically filler material.

CD2 hides its treasure is in the middle, with three acoustic renditions of tracks from the parent CD. ‘Driving In Style’ is possibly as good as the electric version, though the short instrumental break could also have been inserted earlier in the song to break things up. I do in fact much prefer the acoustic version of ‘Dog From Hell’ – With what sounds like either a simple but effectively played mandolin or banjo also featured. There’s also an acoustic version of ‘Sleep’. Now, in this duet rendition, vocals are traded between Mancini and D-A-D’s Jesper Binzer. As such, it’s a more thoughtful rendition as we listen to two sides of an emotional breakdown. Aesthetically though, they made the right decision commercially, with the sole female perspective allowed to cut deeper to the emotional core and gain listeners’ sympathies more effectively.

As a package, Thundermother fans will find the Deluxe Edition of Heatwave good value for money. It offers valid alternative choices of how songs could have turned out, and while there are a few tracks one can live without on both CDs, the good stuff is pretty nifty and proves the leaps and strides you can still make as a young band in his day and age. But then again, they’re Swedes, a small country but one that pretty much rule the roost in today’s populist music industry. All power to them.

7. Give Me Some Lights (Acoustic) 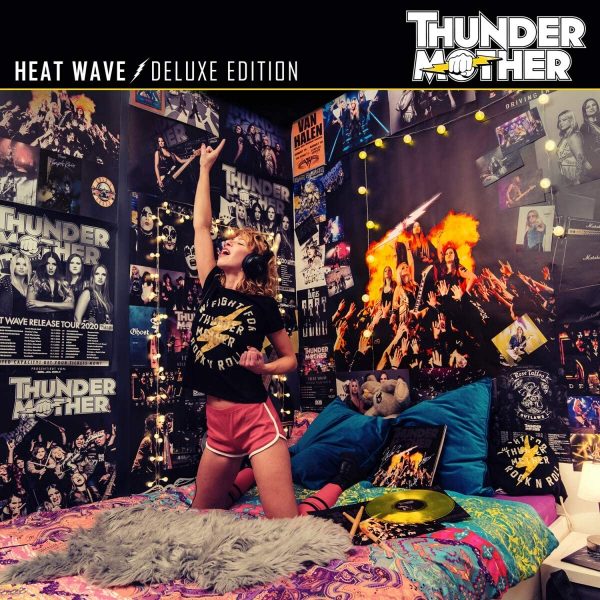